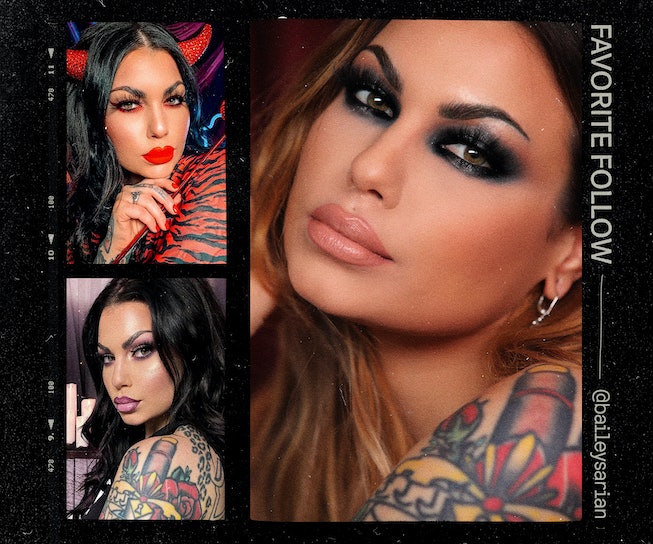 If there are two categories of content that are guaranteed to get views on the internet, it’s true crime explainers and makeup tutorials. At the intersection where the two meet is Bailey Sarian.

Sarian’s channel has just recently hit five million subscribers, but the growth of her channel and her most successful series, Murder Mystery & Makeup, came about organically. Sarian has been doing makeup for about 12 years. She was first hired at Sephora when she was 20 years old, where she worked for five years before going on to work at Urban Decay and then as a freelance makeup artist for celebrity clientele and brides. She first started her YouTube channel in 2013 with classic makeup tutorials. “Around 2016 is when I started taking YouTube more seriously and started uploading consistently,” she says. But retelling the tales of serial killers while blending and contouring didn’t start until three years later. “2019 is when I officially started the Murder Mystery & Makeup series. Now it’s full time. It’s so fun – it’s the dream,” she explains.

Below, Sarian shares about her passion for researching true crime, her favorite beauty products, engaging with her subscribers, and more.

On Starting the Murder Mystery and Makeup Series

“I started on Youtube back in 2013 and it was all makeup related content. Then, in 2018, that’s when the Chris Watts case happened. He murdered his whole family and it was really awful. I could not stop watching all of the interviews and everything about it. I had all of this built up knowledge but I didn’t have anyone to talk to about it– none of my family or friends followed it. With all of the information I was collecting I thought I should make a video about everything I learned. At first I was hesitant because it didn’t fit in my channel anywhere, so I thought I could do my makeup at the same time, that way it made sense with what I was doing [on my channel]. I sat on the idea for a couple of months. I thought it wouldn’t be received very well. But in January 2019 I was like, I’m just going to do it. Within the first day the feedback on it was so good, I had about 60,000 views within the first 24 hours. For me was groundbreaking because at the time I was averaging about 10,000 views. So when I saw that, I thought I am onto something here.”

On the appeal of true crime and makeup

“I don’t spend too much time thinking about why people like my channel because I have no idea. My only assumption is like a lot of people who are interested in true crime are women and many women also enjoy makeup. But when I look at my audience, I have a lot of men watching, too. I get a lot of comments where it's like a husband and wife are watching my videos together, or boyfriend or girlfriend. I think it might be because I’m not lecturing in my videos. I’m more like, ‘Oh my God, let me tell you about this story really quick while I blend out my eyeshadow,’ like we’re going out to the club together or something. I think my whole approach is keeping it simple. It’s like talking to a girlfriend. I don’t make it so much about the makeup, but it gives everyone something to watch.”

On her earliest experiences with true crime

“My mom was a 911 dispatcher and she would take me to work with her when I was a kid. I would sit in and listen in to the 911 calls. We laugh about it now, but at the time I don’t think it was very smart of her to take me to work with her as a child and for me to be listening to some of these horrific calls. But I remember thinking that this was so fascinating. It had me so curious. Why is this happening? Why are there bad people? After that I was always interested.”

“First I find a story to cover. Sometimes it’s from the comment section, everybody is always recommending them to me. Sometimes I start Googling and I try to find a story that I’ve never heard before. That can take a whole day. Then, I usually spend about two to three days researching. I do as much research as I can, whether that’s watching documentaries, interviews, or reading biographies. I love the library, you can find so many books on different serial killers. I take in as much information as I can, then I do a script. I type out the story from start to finish – the background, what lead up to the person becoming a murderer, the event, and then the aftermath. Then, I reference that script whenever I’m filming. That takes five to six days from start to finish, from doing the research and writing the script, to filming and then editing.”

On finding her tone

“One of my biggest things was to never add spooky music. I didn’t want anyone leaving my videos feeling worse. True crime can be so intense and brutal that it ruins your whole day. I felt like I could share these stories but I don’t need to go into graphic detail about what happened. I rarely ever do that, I leave out a lot of morbid stuff. I keep it more straight forward about the crime. I don’t need to tell you every graphic detail about how it’s done.

I think we’re all trying to figure out how someone wakes up and decides they are going to kill one day. What are the red flags? I think the upbringings and difficult lives of these killers often go overlooked. At least for me, getting that background helps it make sense how they turned out the way they did. I like showing both parts. Let’s have a discussion about that.

I think there are things we can learn from these stories. Number one, how your upbringing is a humongous part of who you become. And number two, what can we do to protect ourselves. But sometimes it’s like ‘girl, I don’t even know what we can take away from this’, because the crime just came out of left field. That’s why I also look the the comment section. That’s where people come through with their own advice and what they think we can learn from the stories as well.”

On her online community

“My community is really engaged with one another. I look forward to that the most. I have such a close relationship with them even though I don’t really know them. But I kind of do and I really appreciate them. Without the community and without the viewers I wouldn’t be doing what I’m doing. So I want to make sure that I let them know they are acknowledged and that I appreciate them and that I see them. It’s really important to me.”

I really liked the look I did in the Jeffrey Dahmer video. It was a green eyeliner look and it was super glittery. My eyeliner was uneven and everyone in the comments had to remind me. But I loved it, it was so pretty. Maybe I’ll recreate it and do it better next time.

When I film videos, the makeup is always an afterthought. There’s been a couple of times that I’ve practiced a look before hand. But for the most part, it’s whatever I’m in the mood for for the day. Makeup is so second nature to me. It's something that I could just zone out and start doing and next thing you know, it's done.”

On her favorite beauty products

“Concealer is my favorite. I’m always using the Jouer Essential High Coverage Concealer and the Tarte Shape Tape Concealer. Everyone always makes fun of me because I use so much of it. I do. I’m not going to act like I don’t. I have an obsession. I keep layering it in hopes that it hides all of my secrets.

Right now, I’ve been using Melt Cosmetics nonstop. Their eye shadow palettes are my favorite. Urban Decay and ColourPop also make great eye shadow palettes. I get a lot of comments always saying, “Oh, I wish I could pull this off”. It drives me nuts because my whole motto is, it's just makeup. It washes off, so have some fun. Try the blue eyeliner. You literally have nothing to lose. If you hate it, wash it off.

“A lot of horror films and people in horror films are based off of Ed Gein. He was a body snatcher. He would dig people up out of their graves and make stuff out of it, like chairs, lamps, belts. He made a full body suit out of skin. It’s just wild, but he was kind of crafty. How do you even think of that? Then you think Oh my god, what a psycho? I have yet to come across anybody who has done something that is so extreme. The DIY king over here making lampshades.”

“I never expected Murder Mystery & Makeup to be so big. I always think of what can come from this– I just hit 5 million subscribers so I think I could do some good with it. I want to do more unsolved mysteries. Maybe someone’s watching and there’s some kind of way to help.

Also I’ve been working on the new podcast called Dark Histories which is like Murder Mysteries & Makeup, but focusing on darker American history stories. That will be coming back this month.”