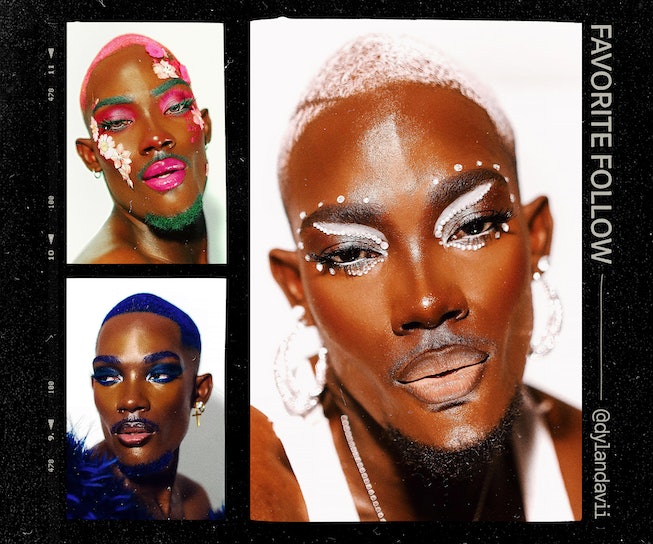 There aren’t many creators today who are able to say that Rihanna, or her beauty empire, directly pushed them into the industry — but Dylan Davis, a newly full-time beauty creator, is one of the few who can. After Fenty Beauty reposted one of his stunning photos to its feed in order to highlight Black creators, Davis says his life changed forever.

“Even though I developed an interest in the beauty community in 2017, I was too scared to start posting looks, mainly because the idea of a man in makeup was kind of taboo at the time,” he shared with NYLON, adding that once he did start wearing makeup in 2019, he wasn’t sure he’d be able to navigate such a “saturated” community. “It wasn’t until Fenty reposted my work that I realized that I had something special to share with the world. The comments and love that I received that day pushed me to recognize my talents and to leave any doubt that I had in the past, strictly in the past.”

His talent is something worth celebrating. Though his first involved look was posted to Instagram in the summer of 2020, Davis grew up watching YouTube makeup tutorials and learning techniques from industry pioneers like Jackie Aina, Alissa Ashley, Makeupshayla, and PatrickStarrr, to name just a few. “I was so fascinated with the idea of telling whatever story you wanted through the use of makeup,” he said.

Davis has chosen to tell a lot of different stories through his work, but one of the most fulfilling to the young creator has been challenging the monolithic idea of what Black men are supposed to do and be.

“Black men are often taught from an early age to not cry, to not play with girls, to not be in theater, to not be feminine, to not be anything other than a man,” he shared. “Hypermasculinity is so detrimental to the development of a man, simply because all men are not the same. Some men don’t want to play sports or be a ‘manly’ man, and that’s OK.” Davis also calls out how colorism has impacted his view and approach.

“Society is so used to seeing dark-skinned men as these hypermasculine fixtures, which makes it difficult to see them as anything else. These makeup brands, which are often run by white or non-Black people, can’t fathom a Black man as the face of their beauty campaigns due to the societal blocks that I mentioned previously. This is why I work so hard to make my pictures resemble magazine covers, because I want to prove that Black beauty is marketable — but not only that, I want Black beauty to be valued. I am sick of Black creators being swept under the rug for a non-Black creator who doesn’t do nearly as much work. We are marketable, we are the blueprint, we are the trends, and we should be treated as such, period.”

Ahead, in his own words, Davis runs NYLON through some of his most personal and memorable work.

On A Favorite Look

This is hands down my favorite look I’ve ever done! It was a part of my Christmas series in December 2020 and was inspired by the Grinch. I wanted to do an editorial version of the Grinch because I hadn’t seen it done before, and that’s more of the look I usually go for. I wasn’t going to do green facial hair for this look, but I’m so happy that I did because it brought everything together.

Sometimes, the best looks are the ones that you don’t overthink. This picture was for a collaboration with Colourpop for their Dark Blooms collection, and I had no idea what I wanted to do! This was around Halloween, and the first idea that popped into my head was an angel, so I just let my hands do the work without really thinking about it. I knew I wanted to incorporate angel wings in a subtle way, which is how I came up with the interesting white eyeshadow on my lids. I enjoy taking “basic” concepts and putting my own spin on them to fit my aesthetic.

On A Next-Level Look

This picture was for a collaboration with an amazing, Black creator, @beautybybb_ on Instagram. She wanted to do a flower look using dried flowers, which kind of intimidated me at first because I had never done it before. Surprisingly, I instantly saw this look in my head. The bright pink eyeshadow, the green lashes and facial hair, the super-pigmented pink lip. I did struggle with getting the flowers to stay on my face, so much so that I almost scrapped the look, but I’m so glad I didn’t. I love how the green facial hair, brows, and eyelashes mimicked grass! That took this look to the next level.

I know you seen me on the video (truuuuue)! This look was inspired by Lil Kim’s iconic blue look from the video for “Crush on You.” I had the same blue hair that she had in the video, so I knew that I wanted to pay homage to her. I even did the little mole that she used to sport in the ‘90s along with a sickening ‘90s lip. I wrapped a blue coat around me like she did in the video and got to snapping pictures. Still a fan favorite to this day!

On Making A Look Pop

When I recreated this look from @beautybybb_ I wasn’t confident that it was going to come out as well as it did. Winged eyeliner is such a difficult thing due to my slightly hooded eyes, but I tried it and it turned out great. I added a purple highlight on my brow bone and cheekbones to tie in the purple eyeshadow and towel. Fun fact: The towel was actually pink, but I made it purple in Photoshop to match the eyeshadow. You gotta do what you gotta do to make the look pop!