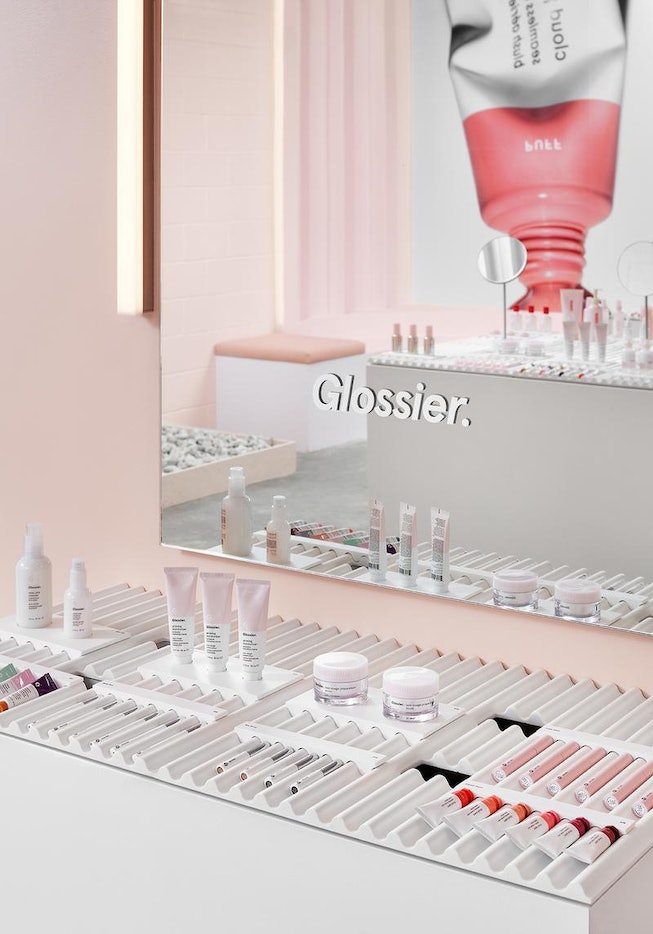 In an August 7 announcement made on the company blog, Glossier announced it would be laying off its retail employees in New York, Los Angeles, and London, who had been on furlough since June as a direct result of COVID-19. In the post, the brand's founder and CEO, Emily Weiss, outlined that employees of the U.S.-based locations would receive 12 weeks of severance, health care coverage through October 2020, and additional wellness and mental health services to ease the transition.

However, in an open letter published on Aug. 13 by an anonymous collective of former Glossier retail employees, it was made clear that the layoffs were the least of their concerns with the brand — detailing an “ongoing insidious culture of anti-Blackness, transphobia, ableism and retaliation that many retail employees experienced.” The letter began to pick up traction on Instagram, thanks to a new account created by the collective named Outta The Gloss, which has garnered over 5.2K followers over the weekend. On both platforms, the collective expanded on their experiences, citing poor treatment for retail employees, specifically for those who are Black and brown.

Calling out the brand's celebrated values of inclusion and diversity, the letter asks Glossier's community: "If this democratization is only achieved by perniciously silencing Black and Brown editors and without treating marginalized staff equitably — have they democratized beauty at all, or is it more of the same?"

The letter goes on to detail countless incidents in which retail employees (known to Glossier as Offline Editors) did not feel supported by HR. Incidents shared included the permitting of a repeat customer who referred to Latinx editors as “illegals," a man massaging an editor without her consent at the showroom, a manager continually confusing POC editors' names, and more. They touch on structural issues within the brand's product development as well, noting that the brand's popular Skin Tint still only has five shades.

"The Glossier 'propaganda machine' is optics-based, courting a somewhat diverse customer base at the expense of those who actually sell their products. It is at this point that calling Glossier 'democratic' rings hollow, where every suggestion from us editors that would open up the brand to be more inclusive is not only dismissed, but miscast as insubordination and not being a 'team player,'" the letter concludes.

The collective outlined demands for the brand ranging from imminent actions — like an open Zoom call proctored by editors with Glossier executives, and the brand taking accountability publicly on social media — to more long term, structural changes like quarterly companywide anti-racism training, an onsite HR liaison that works solely with retail, pay parity, reimagined performance evaluations, and more. "Glossier is in a unique position to work with former retail employees who truly want to see it be better," the collective shared on Instagram.

Weiss responded with a post to the company blog, titled The Glossier Retail Experience, published on Aug. 14. In it, she notes that the stories outlined on Outta The Gloss echoed concerns shared with her by retail team members about the environment in stores, especially Black, POC, and LGBTQIA+ teammates, sharing that the brand quickly investigated the concerns with the guidance of outside counsel. According to Weiss, Glossier created a plan to build a better work environment based on feedback and recommendations offered throughout the investigation. On July 10, the company shared said plan with its New York and Los Angeles retail teams; a copy of the email was included in Weiss' post.

However, the collective behind Outta The Gloss found the statement insufficient. According to the account, more former employees are reaching out to share their experiences at the company, which are being shared to the Editor's Stories highlight on the page. "We will continue fighting for the rights of future Glossier employees and anti-racist reform until our demands are answered and are eager to receive an adequate response," the collective shared.

On Aug. 17, Glossier shared a public statement to its 2.8 million Instagram followers, addressing both the June investigation and the new allegations made via Outta The Gloss, acknowledging the ways in which the brand has failed to create the inclusive and safe environment it projects from the outside. The post went on to offer an apology for the "pain and discomfort these former colleagues experienced while working to build a brand they believed in so deeply upon arrival." It also outlined a plan of action, spanning across open dialogue, companywide training, retail management, work environment, pay, HR initiatives, and more.

"While our stores are closed until 2021 due to the pandemic, we see this time as an opportunity, an obligation, to build a more equitable, inclusive, growth-oriented, and anti-racist employee experience for our retail team," Glossier shared in the caption. "To @outtathegloss and all our former colleagues who've shared their stories: thank you for holding us accountable."

See the brand's full response, below.