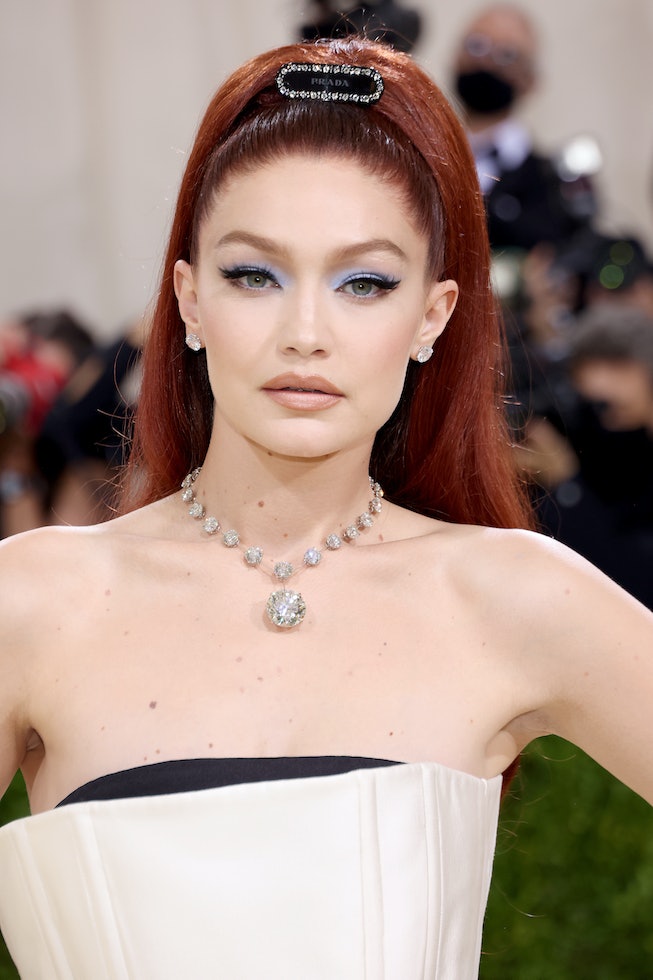 The Met Gala is one of the best red carpet events of the year to make a big splash with some major change– it’s “The Super Bowl of Fashion”, after all. So, whether you’re debuting a new relationship or a new hair color, Anna Wintour’s annual event is the perfect place to do it. This year, Gigi Hadid turned heads when she arrived with bold, dyed red hair to the 2021 Met Gala.

The theme of this year’s Costume Institute exhibit is In America: A Lexicon of Fashion, a two-part exhibition that will run through 2022. What we saw on the red carpet more often than not were very loose and open interpretations of the theme. Gigi however found a more literal way in. Her bright red hair in a high, voluminous ponytail, with a white Prada gown, and baby blue 1960s-style eyeshadow can hardly be a coincidence. The look is part Breakfast at Tiffany’s, part Jessica Rabbit, and we are loving it.

However, this isn’t the first time the super model and new mom has experimented with the fiery hair color. Back in April, Gigi first tried out red for the Versace Fall/Winter 2021 show. She captioned the Instagram revealing the hair color change, “surprise” with a few emojis. Interestingly enough, she was also wearing blue eyeshadow at the time of the reveal.

After a few months of being red, Gigi returned to her traditional dark blonde. All of New York Fashion Week this September she walked the runways with her natural hair color, making the unveiling of her new look at the Met Gala all the more exciting.

Colorist Keith Shore at Serge Normant Salon in New York was responsible for this most recent hair change. He was also the same colorist who brought her red the first time in March 2021. For the 2021 Met Gala, he was one third of Gigi’s glam team, which also includes Erin Parsons doing her makeup for Maybelline New York and Esther Langham who styled Gigi’s new mane.