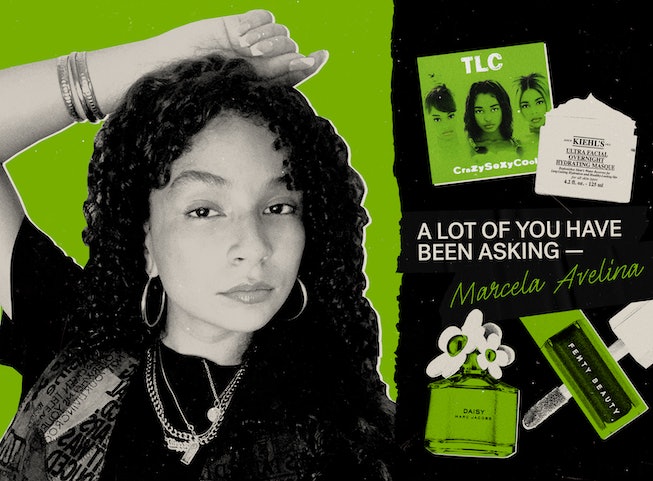 There's seemingly nothing that Marcela Avelina can't do. In a year that's already included adjusting to life during a pandemic, Avelina has welcomed and succeeded amid the change, beginning with a starring role in the latest Netflix hit, Grand Army. With the show officially out, and the world now streaming, Avelina is eyeing what's next, and she's ready to share her latest creation with the world.

After spending much of 2020 working on new music — a process which Avelina credits as her savior — the Grand Army actor is preparing to unveil her EP. She's released music in the past, and has spent the last six years performing across clubs in New York City, but this new material comes as she embraces a much brighter spotlight.

Speaking with NYLON shortly after the release of Grand Army, Avelina touched on the power of vulnerability, how she's using this time to better know herself, and what it's been like to share so much of herself with both viewers and listeners.

Aside from Grand Army, what else have you been working on this year, and how have you been able to keep optimistic and focused on all that you're doing, even though everything is kind of terrible?

How have you been getting through these last few months, aside from music?

I was biking a lot. During that time, I didn't see anybody, and I was kind of locked in my room, so any chance I would, I would go for bike rides. That kept me sane.

As for your beauty routine and skincare, was that something you kept up with these past few months, and are you still doing now?

Definitely. I've been using Kiehl's Ultra Facial Overnight Hydrating Mask, what has been really incredible, because I'm all about staying, and looking hydrated. I also got this really amazing moisturizer that I'm obsessed with. It's by this company called Las Brewhas, and they're a New York-based skin care line.

Does your daily beauty routine differ at all from when you're performing?

I'm not super strict about how I look when I'm performing versus how I look on a day-to-day basis. I always want to feel comfortable in my skin, because I can't do a good job performing, if I'm worried about something else, or my appearance.

Is there one product that you couldn't live without?

Fenty Gloss. The scent, the feel. That's a product that I keep getting over and over.

Do you remember how you first got started with makeup?

I've always been into perfumes the most. If I think back on what my first beauty obsession was, it's always been perfumes and lip gloss. I've never really been a heavy makeup person, and I normally don't wear any, but I love lotion and perfume. I think my first perfume with Clinique Happy and Marc Jacobs's Daisy. I would probably douse myself in it and wear way too much, because I was younger.

If you had the opportunity to create your own perfume, would you do it?

I was just joking about this with my friend the other day, but I would love to do that. I really like a citrusy, floral scent, but I also love coconut, and it'd definitely be a clean, fresh scent.

For this album, this is probably the most vulnerable I've ever been in my music. Lyrically, this release is more straightforward, and not everything is in code or in metaphor. I grew up singing in a choir, so I feel like I am attracted to grand harmonious vocal lines. I think I'm starting to now see some influence from being classically trained in piano. This album has a lot of those seeds that I didn't even realize were there.

There's always an adrenaline rush before sharing music, and definitely there's so much adrenaline that came with Grand Army coming out. There's power in honesty, and that's what helps me remain transparent. Transparency shows itself most in, in the art that I make rather than what I'm going to share to any given person on any given day.

What advice would you give to readers on how they can get through this time?

Right now is a really great time to explore any reasons why you feel like you can't sit with yourself. I'm not about the hyper-positivity around what this time is. It's a really dark time, and I don't want to deny that, but I feel the biggest favor we do for ourselves is to know who I am when nobody's watching. When I really have to sit with myself, who am I, what do I need to move forward and maintain sanity?