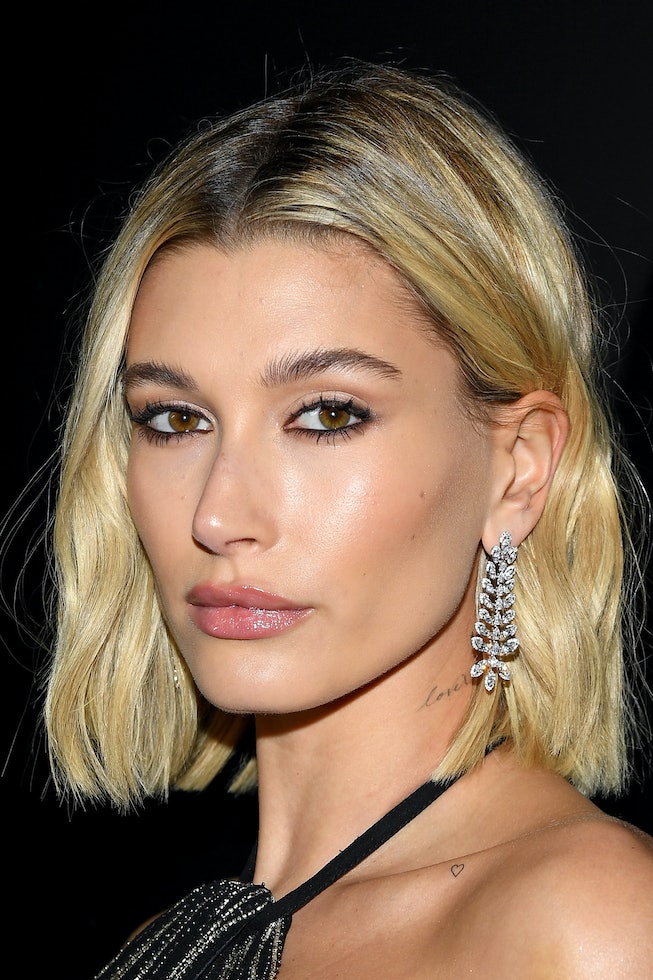 The internet is apparently very concerned about Hailey Bieber's alleged plastic surgery right now. Less than a week after the model called out a seemingly random Instagram account for making unfounded claims that she'd gotten work done, Hailey and Justin Bieber are now threatening to sue a plastic surgeon for doing the same on TikTok.

The Beverly Hills surgeon, Dr. Daniel Barrett, has built up a following of over 300k users on the app for his tabloid-like videos, which aim to give the "expert" co-sign on rumored celebrity plastic surgery, on everyone from Kylie Jenner to Cardi B. In the video featuring Hailey Bieber, posted on May 23, Dr. Barrett shared an older photo of the model alongside a more recent one, both un-edited. He goes on to suggest that she has likely undergone a laundry list of procedures, including a nose job, jawline contouring, skin-tightening, chin augmentation, and a sprinkle of filler in her lips and cheeks. "Pay special attention to the nose," he says in the video. "What do you think? Well, I'll tell you what I think. I think it's physically impossible without getting a little bit of help from someone like myself to go from this picture to that picture."

In response to the video, E! News reports that The Biebers' attorneys promptly sent Dr.Barrett a cease and desist letter, accusing him of using Hailey's "name, image and likeness" to "commercially advertise [his] plastic surgery practice and to spread false, uncorroborated claims that Mrs. Bieber has undergone plastic surgery." To top it off, the couple is also accusing Dr. Barrett of using "copyrighted protected lyrics" due to the inclusion of lyrics from Justin Bieber's song "Sorry" in his video caption. The video is currently still up, and has been viewed over 430k times.

On May 21, Hailey Bieber publicly responded to a post that has since been deleted by Instagram user @beautyambra, speculating the supermodel's alleged plastic surgery with a side-by-side of Hailey in 2011 and in 2020. “Stop using pics that are edited by makeup artists! This photo on the right is NOT what I look like… I’ve never touched my face, so if you’re gonna sit around and compare me at 13 and then me at 23, at least use a natural photo that wasn’t edited so crazy,” she commented, before the post was taken down.

Perhaps it's time to just leave Hailey and her face alone so she can spend less time defending her personal business and more time making wholesome TikTok dance videos with her husband.

NEXT UP
Entertainment
Hailey Bieber Says "It's All Love" Between Her And Selena Gomez
Beauty
It Looks Like Grimes’ Body Modification Journey Has Begun
Beauty
Olivia Cooke’s Beauty Evolution, From Indie Ingenue to ‘House Of The Dragon’ Queen
Beauty
An Ode To BLACKPINK’s Coolest Manicures