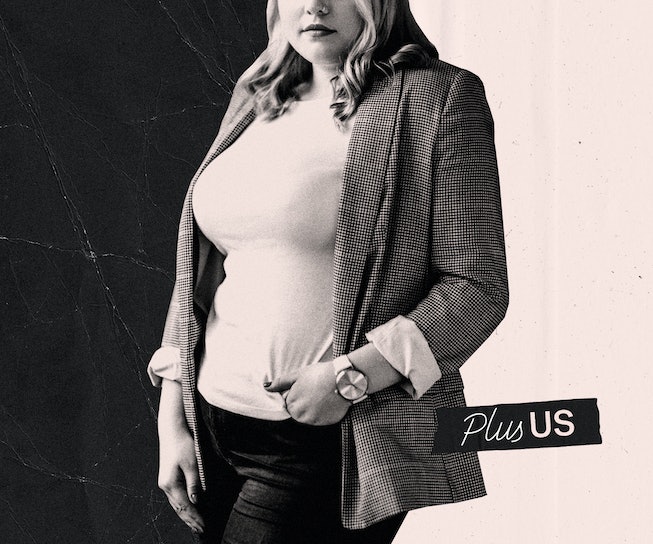 Fatphobia extends far beyond the reigns of the fashion industry or Hollywood. Despite activist efforts, weight discrimination in the workplace remains legal in 48 states, with no federal protections set forth on the basis of body type. And the effects of that, studies show, can be lethal.

“[In my workplace], you're judged on your appearance right off the bat,” says Alison Zupancic, a law enforcement official in Washington D.C. “So if you're overweight, they tell you, and they go through different channels to put you on a diet or whatnot.”

Zupancic recalls instances of being embarrassed and shamed in front of peers for her body, making for a hostile training and work environment. And yet, health remains separate from the pressure to diet, as Zupancic’s mandatory physicals have deemed her to be in top shape time and time again.

Dustin Friedman, an assistant professor at American University, has experienced similar, particularly at the start of his employment search years ago, when a trusted professor advised him to slim down before submitting applications. Her reasoning: In a challenged job market, the opportunities largely are handed to those who fit the thin ideal and society’s definition of conventional beauty.

“I went about trying to be as successful as I could be,” Friedman explains, “working on building my research profile, having a compelling dissertation topic, etc. And then hearing that ‘You might be smart, you might work hard, but as long as you look like that, that's going to undercut anything that you try to accomplish,’ [was harrowing].”

According to a study out of Harvard University, weight discrimination is on the rise. As opposed to race, gender, and sexual orientation, participants recorded an increased implicit bias against those of larger body types over the course of a decade.

That study is not a lone wolf. Research out of Vanderbilt University found that fat women, on average, receive a lower income than their thin-counterparts. A report from the United Kingdom examined the employment interview process, reporting that “height, weight, and BMI all strongly contribute to male and female attractiveness when attractiveness is rated by opposite-sex interviewers.” Additionally, the two professors behind the investigation upheld the conclusion out of Vanderbilt University. Numerous other studies globally show similar.

Michigan became the first state to outlaw discrimination on the basis of weight in 1976 with the Elliott-Larsen Civil Rights Act, which set out to “prohibit discriminatory practices, policies, and customs in the exercise of those rights based upon religion, race, color, national origin, age, sex, height, weight, familial status, or marital status.” Washington followed suit in 2019 — over 40 years later — as have a handful of cities throughout the country, including San Francisco.

Despite the increase in scientific findings that outline how body type is often a genetic predisposition, many largely still believe that “obesity is a choice,” and one that can be easily altered with enough will power and grit.

Mary Himmelstein, an assistant professor at Kent State University, explains that plus-size women are often offered roles that keep them behind the scenes, preventing their body from being seen by customers or associates. “Sometimes you'll see that manifest as, ‘We really want our company to project this kind of image, and you don't fit that image.’”

Himmelstein continues, “And other subtle ways you’ll see this are having health programs where you might get a discount if you meet specific requirements. And anything that requires BMI would certainly be discriminatory against people with higher body weight.”

It’s no shock that fatphobia has cemented itself into the foundation of the workplace. The confusion, however, comes with the fact that only two states have outlawed such discrimination, and that federal protections for marginalized identities constantly refuse to acknowledge those of higher weights.

“This can also have a more systematic effect in terms of not receiving promotions for a job, having harsher discipline or consequences, and it also leads to wrongful job termination,” says Rebecca Puhl, a professor in the Department of Human Development & Family Sciences at The University of Connecticut. “We live in a society where weight stigma is very common, yet it often goes unchallenged.”

The reasons for this are plentiful: Despite the increase in scientific findings that outline how body type is often a genetic predisposition, many largely still believe that “obesity is a choice,” and one that can be easily altered with enough will power and grit. (Weight discrimination can, of course, occur on both ends of the spectrum, with those of low BMIs often being deemed “too skinny,” “sickly,” or “anorexic,” simply based on appearance and not medical evaluation.) Those who fall above what has been deemed a “healthy BMI” are viewed as lacking in ambition, productivity, and self-discipline, as well as having the skills that would qualify them for a manager or upper level position.

Because of this, the plus-size community is not viewed as an oppressed group, thus minimizing the countless challenges they face throughout society today. This toxic and inaccurate belief has prevented weight from being protected on the same national scale as identities such as sexual orientation and race.

It’s impossible to remove each of these challenges from another, as weight discrimination is an intersectional battle. Sexism plays largely into this, with fat women facing more workplace discrimination than their plus-size male counterparts. Additionally, racism goes hand in hand with fatphobia, as studies also show that fat Black women are the most oppressed in the workplace, as well as through society on numerous levels.

Racism goes hand in hand with fatphobia, as studies also show that fat Black women are the most oppressed in the workplace, as well as through society on numerous levels.

Clearly, the fight against workplace weight discrimination is a deeply rooted one. But a handful of legislators are up for the task, including a powerful team out of Massachusetts.

Pushed forward by Democratic Senator Becca Rausch of Needham and Democratic Representative Tram Nguyen of Andover, a new bill introduced in Massachusetts has the potential to make it the third state to outlaw discrimination on the basis of weight.

“We certainly saw more success this session than we've seen in previous cycles,” Senator Rausch tells NYLON. “So I think that is indicative of both more openness to it and also more evidence about the problem and understanding among legislative officials of its significance in the workplace.”

The bill was reintroduced at the start of 2020 after failing to pick up steam in the years prior. And with new support and voices behind it, Senator Rausch and Representative Nguyen began to make noise on the issue. The quick rise of the COVID-19 pandemic, however, halted progress unexpectedly, and it’s likely the bill will need to be refiled come January 2021 to be considered again. (If anything, the pandemic has only intensified the need for this bill, with the plus-size community heavily impacted on numerous levels.)

“Not only is this a financial concern [for those in the workplace], but it also has psychological and emotional concern that most people don't think about,” Representative Nguyen tells NYLON.

Both Senator Rausch and Representative Nguyen are hopeful for what the future holds, and are in need of plus-size voices more now than ever to support the cause and raise awareness.

“If anyone who's reading this piece is passionate about the bill, tell 10 of your friends and have them tell five or 10 of their friends,” says Senator Rausch. “The more people know about it, the more people that engage with the legislation, send in their testimonies, advocate for it with their own state rep and state senator, the more likely it is we'll be able to actually advance the bill across the finish line.”

Senator Rausch says that those interested in supporting this bill can contact her office directly to learn more. Despite the ways social media can be used negatively, it can also, in this case, help bring an end to weight discrimination. Awareness is key to pushing this legislation forward, not just in Massachusetts, but nationally. Representative Nguyen recommends reaching out to your state senators and representatives to raise the issue with them, providing facts and clear research that show why the plus-size community must be protected against this abhorrent form of discrimination.

“I think part of why it's so hard to get these laws in the books is because discrimination is very hard to prove,” she explains. “But that doesn't mean that we can’t give the plaintiffs the opportunity to prove discrimination in the first place.”