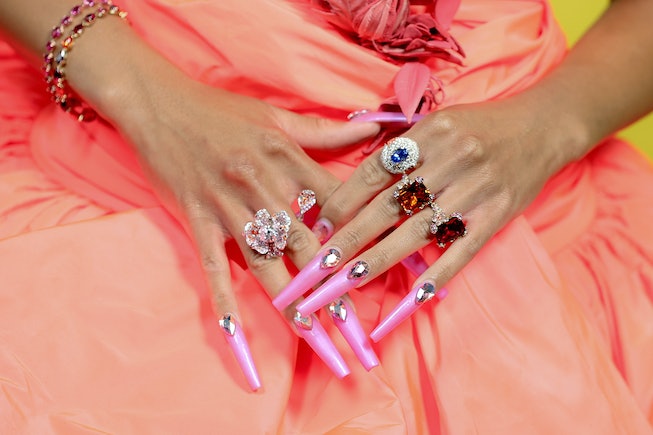 If you haven’t heard already, Instagram is casual again. That means blurry friend photos, photo dumps, and “un-posed” (but actually perfectly posed) fit pics. Last year, as we saw the likes of Dua Lipa and Bella Hadid jump on the blurry carousel bandwagon, we also saw the rise of “nailfies”—which are essentially just a picture of your manicure taken from your own point of view.

Nail photos have long been a thing, particularly for salon pages or admiring the work of professional nail artists. But an increase of elaborate nail art for everyday wearers has resulted in nailfies infiltrating personal accounts. But not a trend to counter the Instagram aesthetics of 2022, nailfies most often look incidental, almost as if the manicure isn’t the focal point at all. While they look low effort, there is definitely an art to capturing your new mani. From Iris Law to Kylie Jenner, we draw inspiration from the best of the best. Here’s how to nail the nailfie.

As far as manicure selfies go, this is the classic POV shot. Last month, Dua Lipa posted a photo-dump that had all the makings of a great nailfie. With bent fingers (which perfectly showcases all five nails), pops of color, and accentuating background props, Dua definitely did this futuristic mani justice.

By resting her hands on her head, Devon Lee Carlson managed to capture a nailfie that isn’t totally obvious. The manicure is still the star of the show, but it’s put into context with a beachy selfie, making it an engaging action shot.

We don’t usually love backlighting in a photo but Megan Thee Stallion’s sunset nailfie is one for the history books. Taken onboard a plane, this post was a much-needed reminder that hot girls can capture nailfies on the go, whatever the view.

Throw it back to taking selfies with your rear facing camera and a mirror. Dixie managed to perfectly cross over her fingers to avoid the awkward hand shape that holding your phone can cause. Plus, with this pose you get to show off both hands. Take notes!

While this angle shows what your mani looks like from your eyes (while looking down at your matching outfit, of course), adding both hands into the mix means we’re left perplexed how the nailfie was actually taken. Grab a friend for this one.

This is the hardest level of nailfie to capture but the payoff is adorable. Matching her eyeshadow to her nails, Iris Law showed us how to capture both your face and your nails with one confused pose. Not to be attempted before washing your hands.