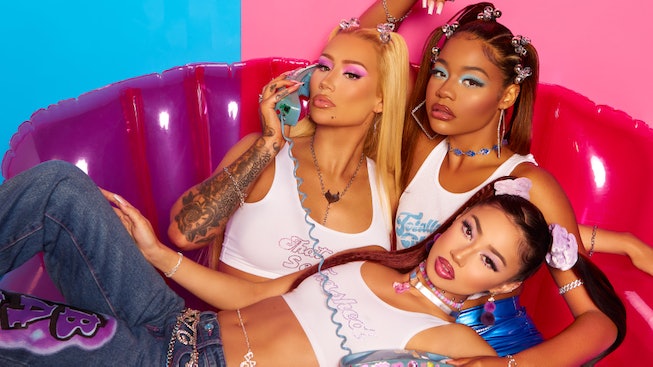 It’s no secret that the rapper loves the ’90s and ’00s aesthetics. Her breakout single Fancy even had a Cher Horowitz inspired music video. On her instagram, her style also often includes other throwback favorites like spiky up-dos and baby braids. If you

Staring on Friday, August 29, we can all get Iggy’s look with the new “Totally Plastic” collection. The 13-piece collection includes three nine-color eyeshadow palettes (including the 2000s greatest hits– frosty blues, pastel purples, and candy pinks), a face contour palette, four lip glosses, fake eyelashes, and extra accessories even Lizzie McGuire would covet. Think fluffy and/or glittery. There’s something for your vanity and for your bag including a heart-shaped hand mirror and a cute travel case. Every part of the collection is adorable and toy-like, making it a great reminder to be playful with your makeup.

Offering high-shine lip glosses and trending pastel colors, the products bring our favorite 2000s shades to today’s better performing and longer-lasting formulas, giving the best of both worlds. They also won’t break the bank, ranging from a $7-$29 price point.

Ahead of the launch, Azalea told New Beauty that she has “never been able to let the nostalgia of the 2000s go”. And from the look of the latest beauty trends (blue eyeshadow, temporary tattoos, a lot of blush, and more) neither can anyone else. The hashtag #2000s has over 4 billion views on TikTok alone.

“For me, it’s really the frosted, iridescent shimmers that were so big in the early 2000s, and it’s made its way back to makeup now with how popular things like highlighter and inner corner eyeshadow are,” she said.

Whether you missed out on these trends the first time or you want to relive all of your Y2K childhood dreams, this collection looks like the ultimate starter pack. We’re also here for the collage-inspired packaging that looks just like our old high school scrapbooks. The campaign imagery itself has also drawn comparisons to Mean Girls (the original plastics).