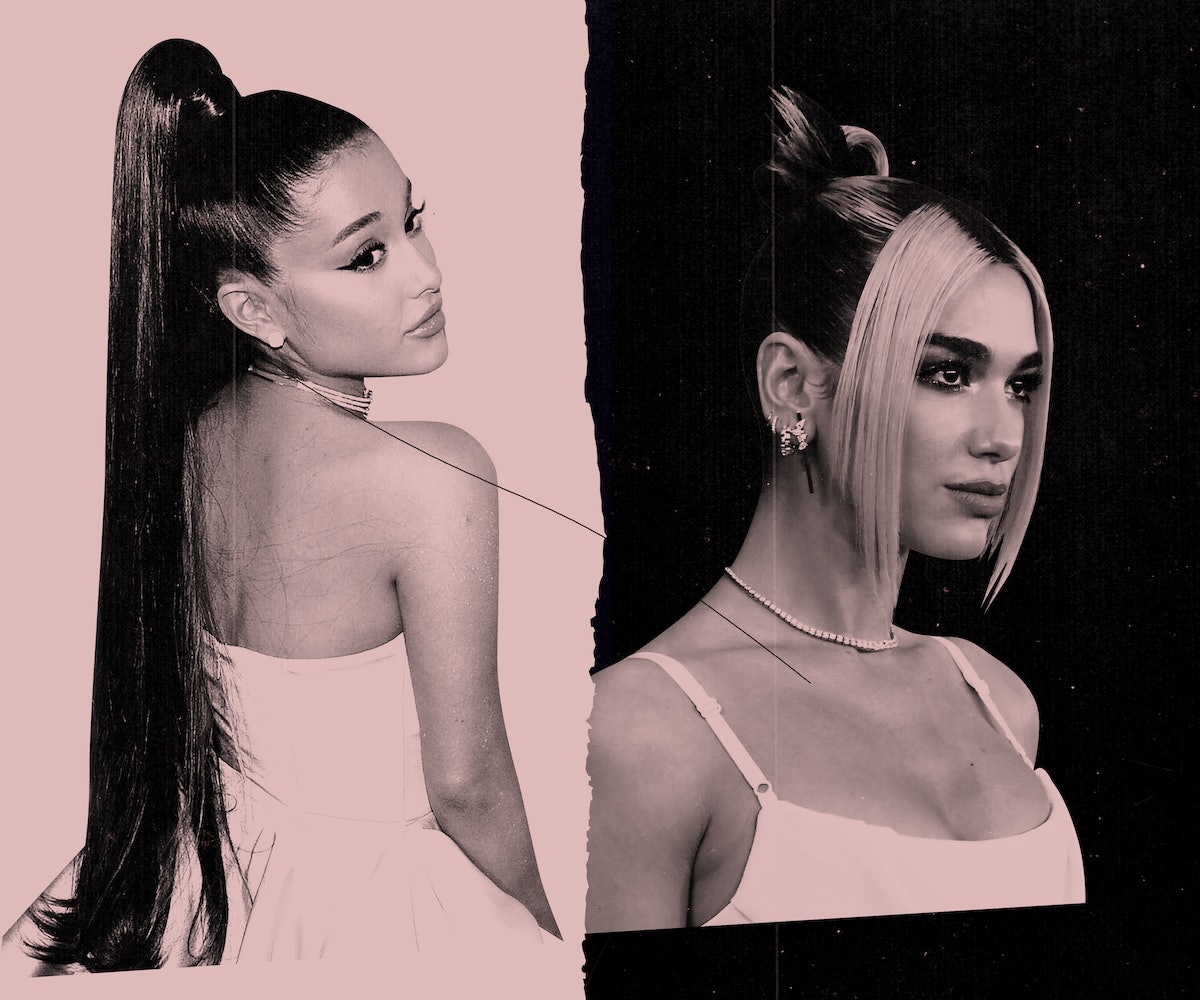 Breaking up her black bob with peroxide blond for Future Nostalgia, Dua Lipa set the world alight. As The Weeknd shed his signature volcanic dreads for Starboy, we primed ourselves to usher in an entirely new era for the artist. When the cost of remaining relevant is constant evolution, image-makers are on the front lines — and in the headlines. A visual element as simple as hair has the capacity to increase an artist’s stock value, indicating what we can expect — nay, who we can expect — with each new release. These decisions are intensely strategic, and by and large influence our own image. Maybe we shouldn’t judge a book by its cover, but we do.

Surely, this isn't a new phenomenon. Long before Billie Eilish dominated the charts with a green-slashed mullet, breaking the trend of the bottle-blonde pop princess was P!nk — emerging on the scene with a cerise pixie cut and a request to no longer be compared to the “so pretty” girl-next-door, Britney Spears. Then, seemingly overnight, “Misery Business,” the 2007 hit single from pop-punk band Paramore, became the anthem for the emo-pop movement. (To give context to the track’s endurance, Travis Barker and Machine Gun Kelly covered it over Zoom last month.) In the song’s accompanying visual, frontwoman Hayley Williams had hair colored to resemble an open flame, with layers so serrated they could cut glass. All hell broke loose, Williams tells NYLON.

“When the 'Misery Business' look happened, we had no idea we were influencing an entire sect of teen culture at the time,” she recalls. “I was on a constant lookout for ways to set myself apart because I already felt different.”

Just like that, Williams — then a 17-year-old from small-town Mississippi — and her 20-year-old hair stylist, Brian O’Connor, could be credited almost wholly for expediting a brand-new aesthetic: scene. Several years later, the pair launched their own line of vegan hair products, Good Dye Young. The company was catalyzed by O’Connor’s struggle to perfect Williams' color with what was currently on the market, as well as the unending onslaught of fans asking him for tips.

“I really feel ['Misery Business'] hair started part of her branding,” O’Connor explains to NYLON. “I didn’t realize the impact it had, then you went to a show and you see a sea of people recreating your very work. [Then] there’s the messages on social media asking what you used to get her look and I realized, Oh sh*t, this is a thing people are wanting to duplicate.”

It’s highly likely the “Misery Business” look had pop culture in such a tight grip because its debut coincided with online networking’s rapid expansion. Social media has worked wonders when it comes to connecting artists and audiences, says major label music executive Katie Smith, but that increased accessibility has awakened fans to hyper-manufactured packaging.

“We want artists to move us and thrill us and titillate us [authentically]. Unless your voice and songwriting skills are A-level unreal, to be a part of pop stardom, you need personal style and strong creative. Artists today put so much work into their looks from head to toe.”

But what if it goes wrong? While P!nk’s mohawk or Sinead O’Connor’s buzzcut may have carved their places in pop culture, committing to drastic change is risking fan rejection. “Sometimes you try a look and it didn't work the way the team envisioned, or didn't photograph well,” Smith adds. “The artist will take a little bit of a spanking on the worst/best dressed list, maybe get meme'd a bit, but then it's a new day. Move on and take that look off the board.”

Of course, that only ups the pressure to transform. It comes as no surprise that the artists on Smith's label frequently contend with scalp burns from bleaching or hair loss from hot tools and overcoloring. Nashville-alum and singer-songwriter Lennon Stella has oscillated between blond and brunette for most of her career. “I feel like my hairstyle naturally mirrors me both as an artist and person. For now, as I grow and discover how I want to be perceived and what kind of vibe I want to give, I’m liking this soft and gentle blond look. Who knows how long that will last.”

“A look can totally make or break an artist,” echoes Cesar Ramirez, hair stylist to Ciara, Beyoncé, and Ariana Grande. “With social media, people are always craving something new so often, artists feel the need to change their look way too often,” he tells NYLON. “Unfortunately, there are many inexperienced hairstylists encouraging the erratic changes and delivering poorly — and poor execution can make an artist look really off, which can hurt their project.”

Nonetheless, sometimes a makeover is more mental health mandate than publicity-grab. Britney Spears’ former tattoo artist recently revealed the pop princess allegedly shaved her head so no one was able to touch her hair. We watched with bated breath as Rihanna shed her “good girl” image and adopted a mohawk, only to follow it with hyperfemme fluorescent red for the Loud-era. Not every artist can dive off the deep end with a dramatic new look and emerge unscathed. But then again, not everyone is Rihanna.

“She is forever evolving,” says the singer’s long-time stylist, Yusef Williams. “I think the approach to styling and coloring should be very strategic — hair plays a very important role when it comes to an artist’s image. It sets the tone. Know who your client is, know what she can and cannot handle before making your decision.” He continued, “The way people trust Rihanna’s imagery, that makes her a true icon.”

And while some, like Rihanna, are able to only gain more steam with each and every visual evolution, others have found success in consistency. Cari Fletcher looked to the hysteria induced by Justin Bieber’s bowl-swoop or Ariana Grande’s association with a high ponytail when forging her place in entertainment. The singer-songwriter, now known mononymously as FLETCHER, acknowledges that while she’s outgrowing her long, golden tresses, it’s been difficult for her to reject the concept that consistency is key.

“I definitely have been conscious of the fact when you’re a new artist and people are still discovering who you are, there’s power in consistency. I literally complain at least once a week that I’m so sick of my hair — but my hair is a security blanket for me, it always has been. But every time Dua Lipa changes her hairstyle, my response is like, ‘F*ck, something new must be coming; my body is ready.’”

It becomes especially difficult when one style is your signature. Williams claims she refused to allow herself to be “held hostage” by her hair, despite the degree to which it distinguished her in the industry. She chose red in her early teens for the color’s ability to communicate “grunge” without requiring bleach (it rightfully intimidated her), but just months after the release of “Misery Business,” O’Connor recolored her locks auburn.

“I do think there came a point when people just started expecting it, like, what bright loud color is she going to do next?” O’Connor claims of Williams' metamorphosis. “That’s when I feel like she made the shift to going blond. It was like she’s not 15 anymore.”

For rising R&B star Kiana Ledé, things are a little different. While she embraces change, the singer, — whose heritage encompasses black, Mexican, Native American and European descent — knows that any given style carries racial weight, therein affecting how her audience might identify with her.

“Yes, it's clear that having an identifiable hairstyle can add to how easy it is for people to recognize me, or [distinguish] me, but I don't like to be stuck in people's perceptions of me. So I change sh*t up all the time,” she tells NYLON. “This is the most free and natural I’ve felt in a long time.”

From Rosalia’s Flamenco-inspired baby hairs to wig culture, there are numerous cultural nuances and references in hair styling that Smith, the music exec, reinforces must be taken into consideration by artists and their stylists. “Hair is more than fashion: It is personal, political, cultural,” she offers. “Look at Solange and what she taught the world about hair with A Seat at the Table. It was an important conversation.”

Ramirez echoes that sentiment, having worked with some of the most memorable “It’s such an important visual. Hair the first thing you see when you see someone,” Ramirez says. “It’s like a picture, it tells a thousand words.”

Hair is louder than ever before, and when it comes to communicating our condition as humans, it's remarkably eloquent.