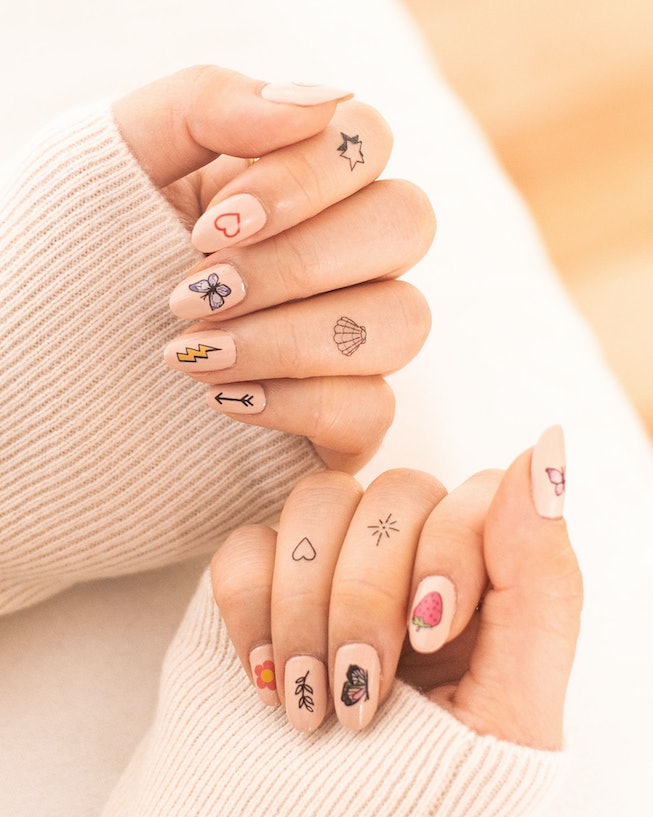 The tiny tattoo trend, popularized by celebs and your Instagram Explore page, is now available for proudly wearing on your manicure. INKED by Dani, the brand behind a collection of temporary tattoos, officially launched its range of mini nail art tattoos, which can be worn on the nails and skin.

Retailing for $10, the packages of adorable nail art tats include both color and black-and-white designs. The selection of tattoos include art inspired by the heavens, as well as lined designs and outlines, which would make for a perfect finger tattoo.

According to the brand, the set of mix and match nail and finger tattoos was largely inspired by customer creativity. As pointed out in an accompanying press release, customers frequently used nail stickers on their fingers, and their looks were often shared on Instagram.

As the tattoos are temporary, you can easily change up your look, creating a collection of pizza-covered nails one day, and a hand adorned in stars the next. Tattoos are intended to last two weeks, and this set features mini designs of some of the brand’s most popular launches.

For those new to INKED by Dani, the retailer has also created a number of celebrity-inspired temporary tattoo packages. There are themed packages, including a Best Sellers pack, a Rad Mini set featuring four tattoos, and large single tattoos.