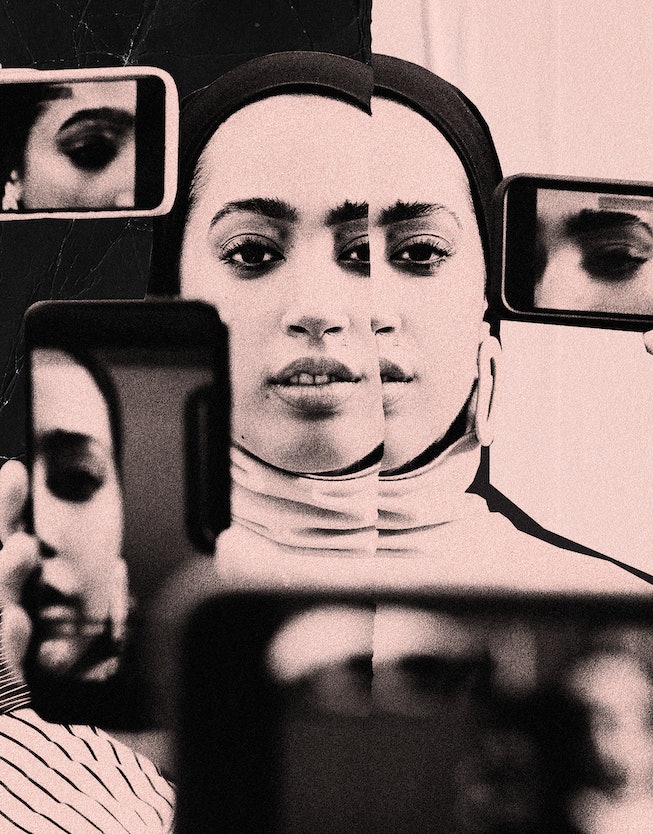 Here is a modern-day can of worms: If beauty filters — as used on social media platforms like Instagram, Snapchat, and TikTok — are made in our image, then who, exactly, is considered beautiful? The answer lies at the intersection of technology and culture, and it is as much of a new problem as it is an ancient one. Augmented reality (AR) filters have long been a staple of our virtual worlds, and there’s no indication that they’re going away anytime soon, particularly when experts are seeing an uptick in "Snapchat dysphoria" and plastic surgeons are getting requests to replicate the faces clients see on-screen.

But beauty trends — virtual or not — all have the same root problem: They are centered in Eurocentrism.

Lauren Rhue, an assistant professor of information systems, considers this to be a (not uncommon) programming issue. “If you look at who's considered to be beautiful, you have three different dimensions. First, you have who's even being considered as a contender for beauty, then who's doing the rating, and then what the [tech] models are picking up,” she tells NYLON.

To be considered beautiful by society’s standards, according to advertising, entertainment casting, and now, filters, you need to have what is dubbed the Instagram Face: clear skin, high cheekbones, catlike eyes, long lashes, a small nose, and full lips. To make it more insidious, filters can also lighten your skin color and remove traditionally ethnic features (big noses, slanted eyes) to fit said standards.

This is not the first time technology has played a major role in upholding subtle yet overt racism in beauty. Rhue refers to the time when camera developers programmed a bias toward Caucasian faces by asking Asian subjects if they were “blinking” and how facial recognition programs have consistently struggled to recognize Black faces. But acknowledging the problem is one thing — to make actual headway in fixing it is quite another.

Rhue’s theory is that there hasn’t been a big enough push for racial training for Big Tech to problem-solve. “Companies are very responsive to any AI bias. If you tell companies their bias, they can manage to fix it. The example I was talking about with [the cameras] was a huge problem, and they were able to fix it. So to me, it seems as though there isn't necessarily this push,” she says. “For me, it seems there's more of a push to say: Why do we even need [beauty filters]?”

Julia Kong, a Burmese Chinese actor in Los Angeles, has a complicated (but common) relationship with them. “Beauty filters are like a splinter in my finger that I can't get rid of. That split second when you remove a filter and catch a glimpse of your true image without the filter serves as a daily reminder that there might be a 'right' and a 'wrong' way to look,” Kong explains to NYLON. “I’m reluctant to admit this, but I’m sure I’m not alone: Sometimes I prefer how I look with a filter and am disappointed when the filter is removed. While I have arrived at a newfound level of self-acceptance entering adulthood, filters still occasionally serve as a reminder that I could look a little better if I were enhanced somehow.”

The ego-boosting effects of beauty filters also come at a cost.

But for Kong, the ego-boosting effects of beauty filters also come at a cost. She describes how filters can lighten her skin, widen her eyes, thin out her nose bridge, and shrink her facial structures until she is “unrecognizable” — effectively erasing her racial identity to fit the mold of the Instagram Face. And she’s far from the only one who feels this way.

Ayumi Patterson, a model in New York City, says that while she doesn’t take issue with the core concept of a beauty filter, it’s the built-in facial augmentation that’s damaging. The other end of the racism in the beauty-filter spectrum is the colonization of ethnic features as an aesthetic, one that Patterson and Kong are both familiar with as BIPOC.

“I recall my experience as a Black Asian teen how a smaller nose and nonbrown eyes seemed like the answer to my problems, and now, as an adult, find selective parts of my face (eye/lip shape, tan skin) are now exaggerated, commodified, and normalized for the very audience who made me feel othered during my formative years,” Patterson tells NYLON. “There's even more irony when you consider these filters aren't primarily for the marginalized groups who already possess these features.”

To her point, the beauty industry is no stranger to appropriating ethnic traits. There is the Kardashian effect. There is the fox-eye trend. Beauty, it seems, is only cognizant of nonwhite features when it fits a Eurocentric agenda, and tech has only rewarded the issue. If we apply the "life imitates art" philosophy, then AR filters are indeed parroting a systemic issue in who is, and isn’t, considered to be beautiful.

Unfortunately, there are no signs that point to an end of this augmentation craze, but an understanding of what both tech and trends mean and do is a start. “I don’t think beauty filters are going away any time soon, and that even if changes were to be implemented, we would have to rely on something out of our control,” says Kong. “What we can control, however, is ourselves. We can use this online discourse to start real life conversations with our peers or between parents and children to discuss self-image and how it relates to filters and social media.”