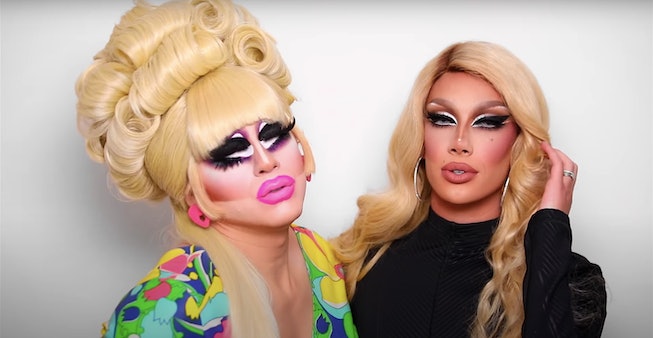 The beauty YouTube community is no stranger to controversy, especially when it concerns certain influencers. Such was the case when James Charles released his newest video featuring Trixie Mattel on May 5, which left fans immediately wondering how (and why) the collaboration occurred during this period of recommended social distancing.

Pairing up for the "Ultimate Drag Transformation," it would seem — based on a conversation which occurs in the video — that Charles and Mattel filmed while they were supposed to be socially distant in quarantine. As Cosmopolitan UK reports, at around 10:16 in the video, Mattel discussed a current quarantine routine, saying, "You know what the tea of quarantine is? I've been doing the YouTube videos and filming with Katya and it's really an odd feeling to get in drag and not leave your house. Yesterday I had to film during the day and stream at night and I was sitting in full drag at my kitchen room dining table eating a salad like a normal person, I felt like a sim."

While the comment doesn't make clear whether the video might have been filmed before any stay-at-home orders were issued and enforced by local government, the idea that the two may have broken an order to work together has upset some fans. "When did u film this? You know because we're in quarantine," one fan on YouTube questioned. "Aren't they supposed to be isolated," another person inquired.

Conversation surrounding the filming continued on Reddit, where members of BeautyGuruChatter discussed whether the two had broken social distancing protocol. One person suggested that the pair should have filmed via webcam, while another Reddit user called the video a missed opportunity. "If this happened in spite of the recommendation for social distancing then I’m disappointed," they wrote. "This was an opportunity for a totally unrelatable beauty community to break down and show their human side—commiserate with us. Bring us entrainment and challenge their skill sets as we all bunker down and braved the quarantine together."

As of Thursday, May 7, neither Mattel nor Charles had addressed the circumstances surrounding filming.

Check out the controversial collaboration, below.