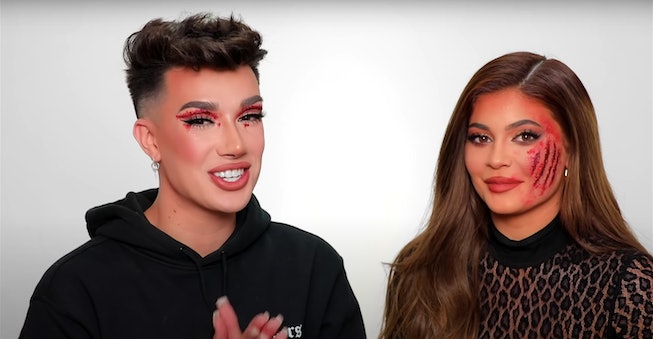 Kylie Jenner and James Charles celebrated the Halloween season in style, collaborating on a video that featured a makeover for the Kylie Cosmetics founder. In between the laughs, fake blood, and talk of their previous Halloween video, Jenner opened up about her decision to limit her time on YouTube.

As of late, Jenner has been adding new videos to her YouTube channel, a move which Charles noted. The makeup artist asked about Jenner's decision to post more, and as she revealed, previous Internet reactions and comments had caused her to take a break from posting.

She pointed to her posts on Vine and Instagram, telling Charles that for a time, she felt comfortable sharing so much of herself with followers. "As I got bigger and bigger, I realized...when people used to say really mean things about how I really am, my personality and what I love the most about myself, it would hurt me more than almost playing a character," she said.

Jenner and Charles agreed that it's sad that the makeup mogul doesn't feel she can be her true self. However, Jenner did hint that she intends to resume posting. For one of her most recent uploads, she spent some time with her daughter, Stormi Webster, baking Halloween cookies.

Along with making plans for her YouTube channel, Jenner promised more TikTok posts, and some possible new Kylie Cosmetics releases. She noted that COVID-19 had shifted some plans around, but said that she was using the time to work on new things.

As for her "newest thing," Jenner just released a brand new Kylie Cosmetics collection, which features a brand new palette, gloss, and makeup goodies. Charles used the product for the pair's video, giving Jenner a glam face, with the addition of a special effects scratch on her face. See it all, below.

NEXT UP
Beauty
TikTok’s New Beauty Trend Is Skin Care With A Side Of Existentialism
Beauty
Millie Bobby Brown’s Beauty Evolution, From Child Star To Gen Z Beauty Icon
Beauty
The Best Beauty Moments From The 2022 BET Awards
Beauty
The Presley Women Are The Ultimate Rock And Roll Beauty Icons