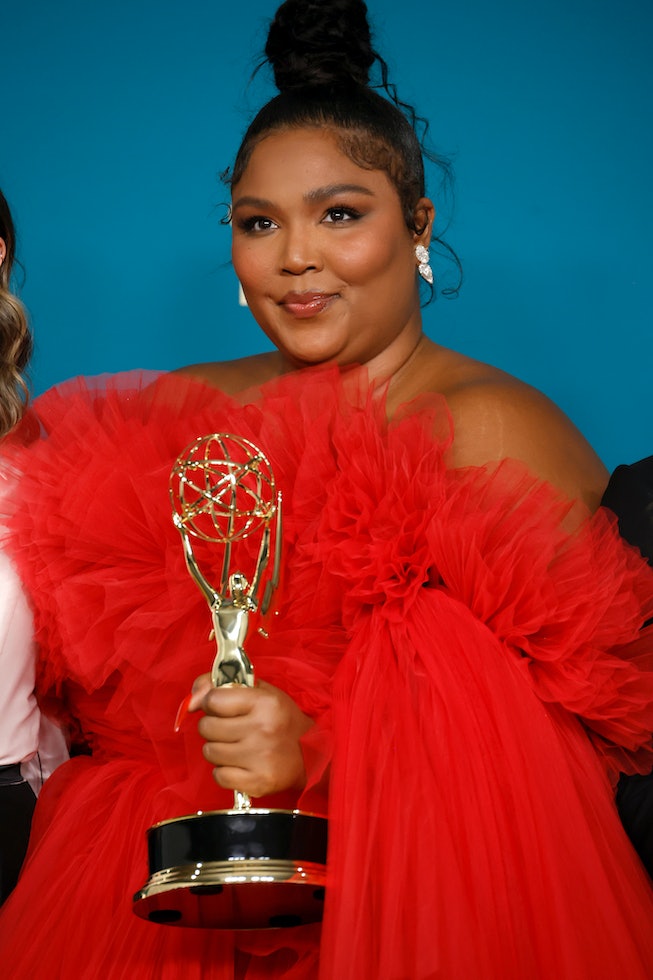 Over the past few months, Lizzo has officially transformed into a punk-goth icon. She wore black lipstick and a fake lip ring to the 2022 VMAs in August, wore a mullet for her October Vanity Fair cover shoot, and has experimented with witchy black eye makeup. Now, Lizzo has made another daring hair move: At Tuesday night’s People's Choice Awards, she arrived with a voluminous mohawk and a dramatic Alexander McQueen patchwork gown.

While Lizzo may not have actually shaved the sides of her head for the mohawk (or rather, fauxhawk), her hairstylist Shelby Swain achieved the look by gathering her curls at the top of her head and slicking down each side. To top off the look, she added several gold hair pieces from Brooklyn-based jewelry brand Alexis Bittar to match Lizzo’s chunky gold chain necklace and earrings.

Lizzo took home the People’s Champion Award and Song of the Year Award for her hit "About Damn Time” at the ceremony, where she called her full look “Fit for a McQueen”. While her mohawk commanded attention, so did her soft glam, high-blush with smoky cat eye makeup (done by Alexx Mayo) and her red ombré french manicure embellished with crystals (by Eri Ishizu). Sharing the look on her Instagram, celebrity friends like SZA praised her hair and outfit.

Lizzo’s mom Shari Johnson-Jefferson presented her People's Champion Award at the ceremony, saying that Lizzo "has shown us all that we don't have to conform to anyone's standards in order to be happy, to be creative and to feel worthy.” In her acceptance speech, the star went on to highlight 17 activists, including Mari Copeny, Shirley Raines, Yasmine Aker, Emiliana Guereca, and Esther Young Lim. “To be an icon isn't about how long you've had your platform. Being an icon is what you do with that platform,” she said.