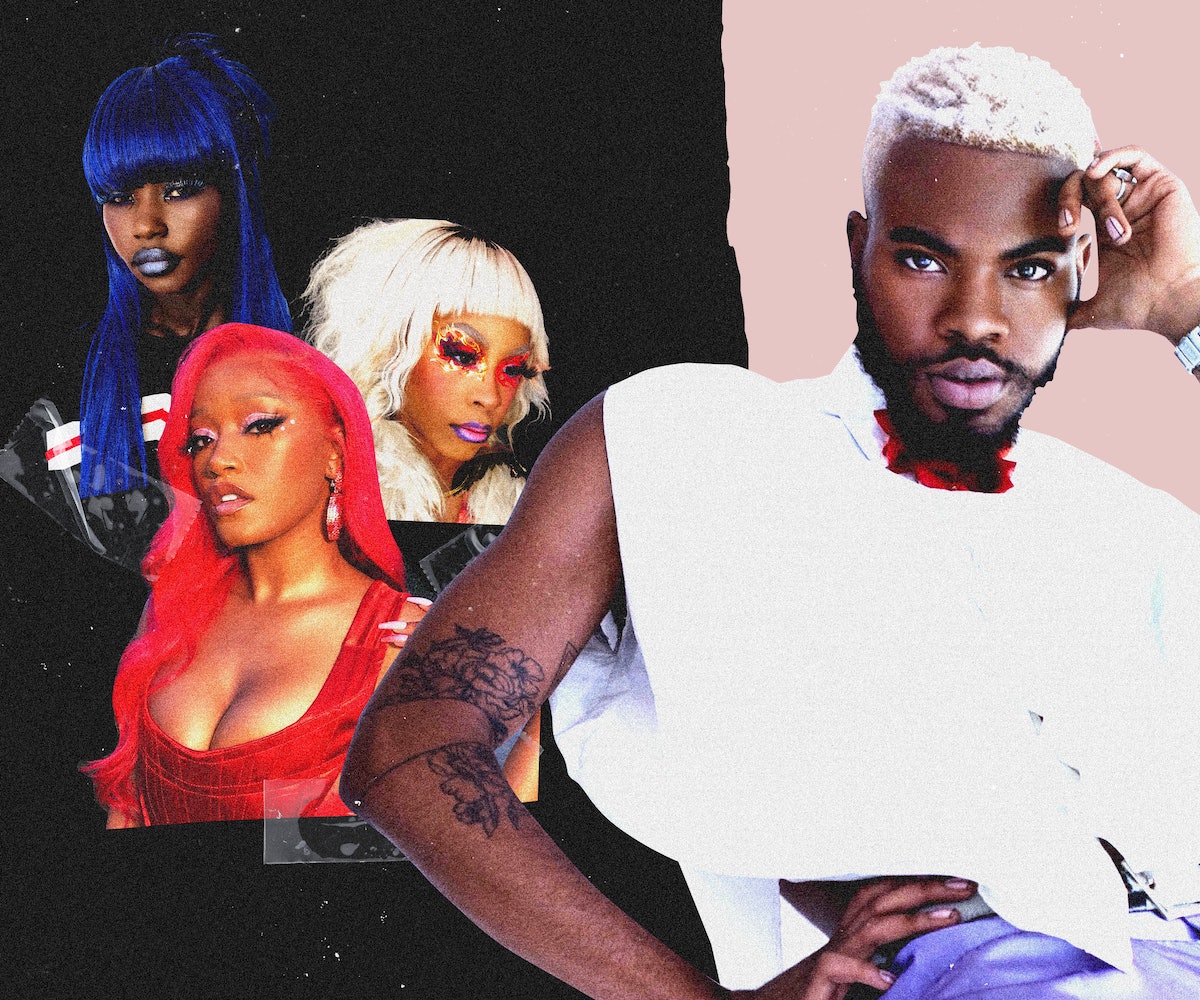 From a quick sweep of his Instagram page, it would be easy to assume that makeup artist Scott Osbourne is living the life. At just 22 years old, he's in high demand in Los Angeles; he counts table-shaking artists and personalities like Rico Nasty, Keke Palmer, Doja Cat, and the Clermont Twins as clients. Plus, he's developed the kind of signature, inimitable style — one that sees makeup as art, and knows that art can be ugly and rigid and messy — that will be studied and commemorated decades from now. But as with most things you become familiar with by scrolling on your phone, there's so much more to his story, and it's one worth knowing.

Osbourne grew up in Bowie, Maryland, and he always knew he wanted to do makeup. From watching his mom's growing career as a model, to surrounding himself (and his childhood bedroom walls) with fashion and beauty magazines and tabloids, he saw makeup as his way into the industry fold. "I was just always inspired by the bizarre," he told NYLON over the phone. "I just always liked to stand out." He'd do makeup for friends' dances and proms, and eventually built up his local clientele from word of mouth, all while in the 10th grade. When he eventually got his license, he started doing weddings, too.

In 2016, Osbourne graduated high school and turned 18 — the age one can finally apply to MAC, a seeming rite of passage for the makeup world's biggest and brightest today. "My birthday was June 28," he says. "I applied to MAC on June 29." He worked there for just nine short months (a discrepancy with a co-worker got him fired), but his rapid growth there, meeting a lot of new clients and expanding his artistry, undoubtedly set him up for what was next.

As a freelancer, he was taking work as it came, picking up New York Fashion Week gigs and growing his regular clientele when, one day — he remembers the exact date, Jan. 14, 2018 — he got tagged in the comments of an Instagram post. A hairstylist was looking for a makeup artist in the area to work on one of her clients. The client? Rico Nasty. "I didn't know who Rico was at that time," Osbourne says. "I had heard her name and stuff, but I really didn't know who she was. That day I went and did her makeup, and she fell in love with it. Ever since then, I've been doing her makeup nonstop."

Osbourne moved to LA soon after, as he fell in love with the city and all of its possibilities while out west for Rico's 2018 Fader cover. People started seeing him work with the rapper, and his phone was blowing up with requests from up-and-coming artists and Instagram girls alike. Stability was becoming more of a reality, leaving more room for Osbourne to do the work he really wanted to do.

"My makeup really didn't take off on a big break until I took my first U.S. tour with Rico. The first night we did some soft, pretty glam, it was cute," he says. "But for the second night, I was like, 'Yo, Rico, let's do something fun, something wild.'" Rico obliged, and what came out of it would go on to define not only Rico's cool, cyber-goth look, but Osbourne's aesthetic, full of fantasy.

"I ended up drawing a really big heart on one eye, and other was a really pretty eyeshadow. If she turned her face to the other side it was like two different people," he explained. "That was basically the start of the crazy glam. For her whole U.S. tour, everything was something wild. It went from me putting stickers on her face to me taking her brows away, replacing her brows with safety pins or stars or rhinestones and jewels. People started see it, they were like, 'Oh sh*t. Nobody else is doing this. Who the f*ck is this?'" Calls kept coming in, and more clients, like rapper Coi Leray, became regulars. "I made a name for myself that I could do soft glam, I could do no-makeup-makeup, and I could do what I really wanted to do, the fun, dramatic stuff that other people aren't doing."

Osbourne credits everything from different drag shows to Cirque du Soleil to Pat McGrath as his inspirations, citing old vaudeville shows and the '90s supermodel movement, where it wasn't rare to see Cindy or Naomi in exaggerated blush or a wild, "dragged out" eye. It's also not lost on him that most of his clients are Black women, and that their identities alone add to the shock factor of his over-the-top looks.

"You don't really get to see Black women in an editorial light," he says. "You'll see a Hispanic women, you'll see Caucasian women, but you don't really see Black women in all the crazy colors, the colorful lashes, the bright colors on their eyes. That's what I really want to focus on. I'm going to be the artist that's going to do it." He keeps the same energy — advocating for Black lives and Black creativity and expression — when it comes to his kit and brand partnerships, too.

When the Black Lives Matter movement was reinvigorated after the death George Floyd at the hands of police, Osbourne shared a list to his Instagram stories of brands that hadn't spoken up about the movement — one that included brands he used in his kit, like NARS, Charlotte Tilbury, and Revlon (all of whom who eventually released statements of sorts).

"You've got to speak up about it. To see so many brands switching off or being quiet about it, and then makeup artists like me or Jackie Aina and a lot of different people calling them out, and then they want to speak about it," he says. "It's like, do you guys really support the Black Lives Matter or are you just doing it so that you guys can keep your notoriety and your name clean? It showed me a lot of different brands, who to work with, who not to work with; it made a lot of people change their ways." He later shared a different list, one of Black-owned beauty brands to support, including some of his favorites to use on clients, like The Lip Bar, UOMA Beauty, and Pat McGrath Labs.

On a personal level, Osbourne's Blackness, paired with his queer identity, often leave him to be perceived and routinely underestimated in a way that falls short. "A lot of times when I go in on set, for people who don't know me or it's their first time meeting me, they'll say, 'Oh my God, I wasn't expecting you to look so chill. I would expect you to come in with your makeup done.' Being a male makeup artist is always like that, one standard that they automatically want to believe you are. Going in there as a black male, it's always a little step harder because I see a lot of different artists [of other races] that don't even do half of the work that I do, but they're at a higher level."

To be clear, everything Osbourne has done, has been what he himself has done on his own — no manager, no agency. "Everything is me just reaching out to people, just off meetings, off Instagram. Just me being young and hungry," he says. In the less than three years he's been in the major leagues, Osbourne's aesthetic has trickled into the mainstream. He's even found out that his work was on the mood board for HBO's hit series Euphoria.

"When I first started doing Rico's makeup, I was putting glitter on her eyes, on her cheeks, glitter lips," he remembers. "I was going full-blown glitter highlighters, putting rhinestones all over her face, on her lips, on her eyelashes, no one was doing it. It was like a Black man creating mainstream trends and it was amazing to me because it was like, on the backend, I know what I did. I don't really need other people's validation because I know it's me that did it."

In response to what keeps him inspired, what keeps him creating completely unique and innovative looks and concepts day in and day out, Osbourne stresses on the history he studied — and continues to study — so intimately from the beginning.

"Old campaigns," he says enthusiastically, like he could talk about them forever. "Old Dolce & Gabbana campaigns, old Dior campaigns. I really get inspired by old times. Looking at how makeup looked in the old days, it's like we forgot about it," he says, referencing a 2001 Iceberg campaign starring a naked Pamela Anderson on the back of a motorcycle. "It was like my makeup inspiration in a picture — her makeup was crazy but the whole aesthetic of the photo was a feeling. It's just so nostalgic. Whenever I do makeup I want people to think, 'Oh my God, this makeup makes me feel something.'"