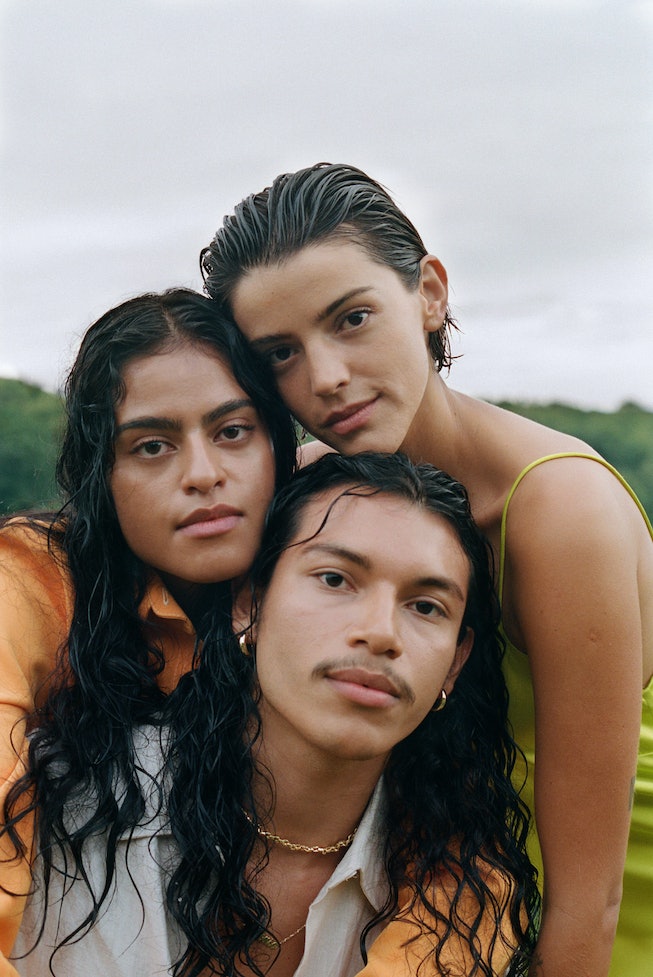 After spending years growing some of today's most notable brands — from Uber to Away — and bringing a handful of Scandinavia's burgeoning fashion labels stateside, Babba C. Rivera is starting something of her own — in the beauty space. On October 22, the branding guru introduced the world to Ceremonia, a new clean hair care brand that’s rooted in Latinx heritage, and all of the storied rituals and traditions that have come from its community.

Though it launched with just one product — Aceite de Moska, a $25 scalp oil now available for pre-order — Rivera, a Swedish Latina, and her team have laid some substantial groundwork for what people can expect for the brand to be and deliver, putting a strong emphasis on creating and promoting a natural, modern approach to traditional Latinx haircare rituals. Despite the reality of a new beauty brand launching seemingly every other day, Rivera is confident in what Ceremonia is bringing to the table.

"What's interesting with the beauty industry is that while it's extremely crowded, it’s also very homogeneous," she shared with NYLON over email. "Most brands are trying to be the same thing and fighting for the same consumers. Furthermore, while there’s a lot happening in beauty, the hair care category is still very much behind when it comes to clean and high-performance formulas. The scalp is one of the most absorbent parts of our body, meaning if we are going to invest in clean products anywhere it should be in this category. Ceremonia is bringing a fresh perspective into the category through its mission to empower the next generation of Latinx, alongside a devotion to offering the very best of clean hair care."

Rivera notes that while the formulas are clean, Ceremonia's offerings are, and will continue to be, high-performance driven, created at what she calls the "intersection of farms and labs." You'll find Latin-American-sourced natural ingredients at the center of each product, and the promise of no silicones, parabens, sulfates, phthalates, artificial colorants, and other "not-so-great" ingredients found in beauty products today.

Aceite de Moska, the brand's debut scalp oil, was inspired by a Dominican Republic-derived treatment oil that works to deliver a whole host of benefits to the scalp, from repair and conditioning to growth and shine, without any added frizz while styling. The formula was perfected with a blend of other oils — from Brazilian Pataua oil to reduce flakiness, conditioning and soothing aloe vera, and strengthening castor oil — that work together to bring the hair to its optimal strength.

With such a strong focus on Latinx culture and tradition, Ceremonia launched with the responsibility of encompassing all of the different people that belong to the extremely diverse community, with all of its hair types and textures (including afro-latinx types that are often left out of the conversation). It's a tall order, but one that deserves to be done right. To fill it, the brand began to build its community of real, diversified consumers to partake in the early stages of its product development.

"This community has played a crucial part in our product development," Rivera said. "They’ve been part of focus groups, product testing, surveys, product wish lists, content creation, and more. Ceremonia truly is born out of the devotion to our community and as such we want to ensure we are continuously creating with them in mind."

Early reviews and feedback from this community are already up on the brand's site, along with photos and hair type descriptions of each, ranging from thick, coiled hair to fine wavy hair and all of the combinations in-between.

Following its October 22 launch, Ceremonia is on the verge of 20K followers on Instagram, overflowing with comments of, "just ordered!" and nostalgic memories like, "I remember when my mom would put this in my hair as a child." It's good feedback for any new brand, and with such a pointed brand point of view, Ceremonia's initial response from consumers is also a confirmation of Rivera's bet there isn't something quite like it yet on the market.

"What most people don’t realize is that Hispanics aren’t just the biggest minority in the U.S., we’re also one of the youngest demographics with a median age of 27 — and we spend 46 percent more on hair care products than non-Hispanics," Rivera shared with NYLON of her early research. "Even with this, most modern brands continue to cater to a predominantly white consumer. The time is certainly now, and I felt a strong sense of responsibility with my background to lead that change."

Watch the brand's launch video below, and explore Ceremonia at ceremonia.com.