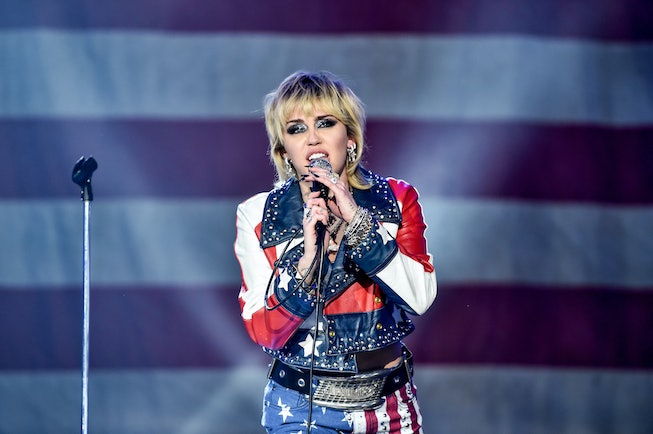 Miley Cyrus is gradually growing out her Tiger King-inspired mullet. The last few months have included countless new 'dos from the star, including a shaggy, choppy style, and a DIY cut which resulted in an unexpected mullet, and for Sunday's Super Bowl, she went further back in time, and channeled the '70s with her shaggy hair.

Performing as part of the TikTok Tailgate ceremony, Cyrus gave fans a look at a very shaggy, new style. Still sporting blunt bangs, Cyrus now has choppy side fringe, and pieces of shag hit at different layered lengths all along her head.

Posing for a pre-performance photo, Cyrus also showed off her curled bangs. And while she was throwing it back to a much earlier era with her choice of hair, she kept her outfit and makeup more modern, sporting her very own cheerleading uniform and matching knee-high boots.

Prior to arriving at the Super Bowl, Cyrus gave Instagram followers the first look at her manicure. Completed by nail artist Britney Tokyo, the style featured the singer's initial against a black base coat. The remaining nails received a few accessories, including stickers, a gummy bear, dangling lightening bolt, and a heart that read baby.