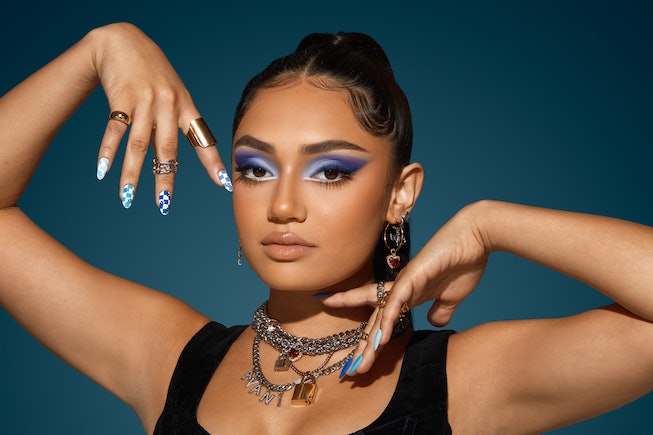 For its latest collaborative collection, Morphe has teamed up with popular makeup artist Avani Gregg, known on TikTok as @avani. Set to release on March 23, the Morphe x Avani collection is a true extension of Avani’s colorful online persona, and features items (as well as packaging) designed by the TikTok MUA.

The limited-edition capsule collection was created with vibrant spring beauty routines in mind. Pick from three shades of Baecation Luminous Bronzer ($20) or add some sparkle to your daily routine with the Whoa Glow Face and Body Illuminator ($18).

Additional items include the Love You & Love Me Lip Duos ($12), and the Lil Beb Mini Lip Gloss Kit ($19) with four shades of high-shine gloss.

Avani told NYLON that it felt shocking when Morphe reached out to her. She admitted that she had hesitated to call herself a makeup artist, but upon speaking with Morphe, her entire mindset changed. “I instantly got to work on what I wanted. I never would have thought I would have my own makeup collection,” she said.

Avani described how the For the Bebs eyeshadow palette is intended to serve as a means of appreciation for her followers, friends, and family. The 30-pan palette, which includes vivid cake liners, features hues named after the most important people in Avani’s life, including Bebs, which is her nickname for followers. Avani also pointed to the shade named You, noting the orange coloring is a tribute to anyone using the palette.

Her doodles, drawings, and ideas are scattered throughout the packaging, and Avani noted that the collection represents her very literally. She’s especially excited about the inclusion of cake liners in the palette, as it’s a recent makeup favorite of hers.

As for those new to the concept of cake liners, Avani happily shared her tips. “Cake liners are very pigmented eye shadow,” she said. “They look like eyeshadow, and you dip your brush in water, and then swirl it around in the pan.” She suggested drawing it on like regular eyeliner, but also encouraged creativity and blending.

A self-taught makeup artist that rose to fame on TikTok, the MUA encouraged aspiring makeup artists that struggle with a certain area to start there first. She specifically pointed out that she has shaky hands when applying eye products, and she usually starts there, cleaning up any mistakes before moving on. “That’s the best thing about makeup — it’s just another form of art, and you can always fix it,” she said.