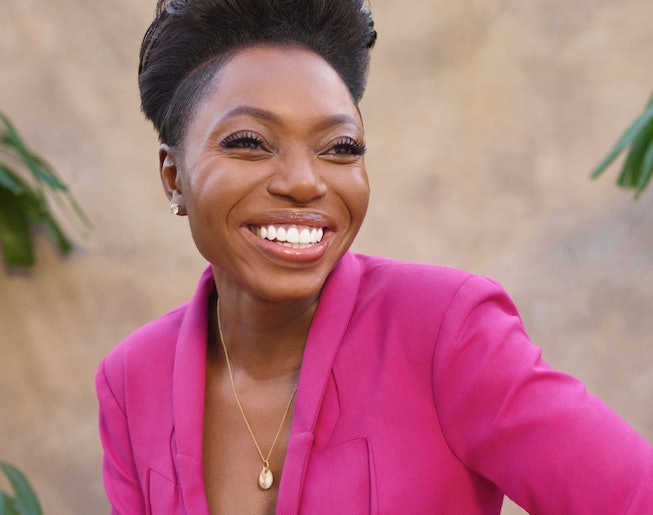 The beauty industry has functioned as a microcosm of larger society’s views about what is deemed beautiful, which has always been steeped in a narrow set of Eurocentric beauty standards. This is a topic that has deeply interested Sharon Chuter, the founder of UOMA Beauty, and drove her to start the Pull Up For Change movement in the beauty industry (which later evolved to incorporate other industries) that urged brands to share the racial breakdown of their in-house, corporate teams and leadership in the aftermath of George Floyd's murder and the resurgence of the Black Lives Matter movement during the summer of 2020.

“The biggest success has been triggering that conversation,” Chuter shared with NYLON over the phone. “Whether companies were involved with Pull Up or not, they were all shaken by it. It inspired consumers to realize they can enact change, and for the employees within those companies to really find a voice and hold the companies responsible. There isn’t any company that is not taking a look at it’s ecosystem and how it's working, and that’s huge. Real systematic change takes time, but what happened in three months hasn’t happened in fifty years.”

Chuter believes that it all starts with the power of conversation, and staying the course to truly enact change on a large scale. “People don’t pay enough attention to the power of conversation. My job is to keep the conversation going, but also to inspire people,” she shared. “Now a Black person can apply for a job with confidence. People would normally never get callbacks, they are getting callbacks. People who would never be listened to at work are being listened to.”

For Chuter, there’s grave importance in keeping the conversation going, as she believes slow, sustainable, and continuous improvement will eventually begin to unfold. She points out this issue that often stills dramatic changes in social consciousness: patience, and lack thereof. If those who are in powerful positions do not reap instant results, they lose interest and the momentum is lost. But even for those brands that have faded into the background with little to actual show for their initial concern, the world has changed significantly in a short period of time, and they must rise to the challenge of greater expectations.

On Chuter’s six-month update calls with various brands she’d worked with throughout 2020, she told NYLON she saw plenty of insignificant results. “The leadership has made it the company’s problem, but have not really looked at themselves as people,” she added. “The issue that we’re dealing with is a human problem, and until it’s treated that way, we’re not gonna find a solution.”

Treating racial bias as a human problem is rooted in sensitivity and being able to look outside one’s own experience, something Black people have had to do for survival, but have not received in return. “A lot of white women will come to me saying that they’re afraid to do this or that because they don’t want to say the wrong thing,” said Chuter. “I ask them what the fear of saying the wrong thing is. You don’t need a program or manual on how to treat another white person like a human being. Why do you need a guide and why are you so scared to talk to me like a human being.”

Sharon gives examples of the microaggressions Black people in corporate America experience with food, and especially as she would as an immigrant: having to hear remarks about what one has chosen to eat for lunch. A situation is offensive and inappropriate, and should not require insensitivity training. Sharon continues explaining that after checking one’s own bias and understanding the consequences of your own biases. In the workplace, black professionals are more likely to encounter prejudice and microaggressions than any other racial or ethnic group.

“What I want to see also is not just a focus on recruitment, but also company culture. It’s not about bringing people into environments where they’re going to be tortured. Black women are traumatized in organizations. People are often upset because Black women are not peppy. Many people in our culture are not peppy people. You are often penalized, and considered aloof or not engaged, because you don’t want to do hot yoga. We have to look at those cultural issues and fix them.”

Beyond creating a culture that is adapted to suit the personalities and comfort levels of all people, Chuter says that companies need to reconstruct how they develop talent to solve their pipeline issue. She explains that there are only two Black high-level product developers, and they have opted out of being brand consultants or product developers to large makeup brands due to trauma they’ve experienced in corporate settings. “You have a sales floor full of all these makeup artists that are Black. Why aren’t you pulling them into your corporate roles?” This is where opportunity comes in. It does not matter the wealth of knowledge or creativity you possess, but rather who gives you the space to allow it to flourish. The focus from companies should be to help nourish talent from within as opposed to solely focusing on approaching people that others have already poured mentorship into.

However, these suggestions are not put into practice due to the clashing generational differences and power structures. These companies cannot simply throw money at the situation or hire lawyers and hope that it goes away. All of these situations are being handled by older white men, as the typical American CEO is aged between fifty-eight and sixty-one (according to a recent analysis by Korn Ferry, the preeminent global people and organizational advisory firm), with a completely different value system than millennials and Gen Z that work below them or consume their content and products.

And while millennials and Gen Z might not be the ones with economic power, that has not stopped the generation from being the leading force to help champion Uoma Beaty’s work and cause. “Social media is a huge part of the movement. We rally Gen Z. Social media is a powerful tool. It allows ideas to get shared quickly,” she shared.

While Chuter assures her peers that doing the important work behind the scenes is equally as valid as her very public contributions, she also assures me that there is so much more to come from her, the Pull Up For Change movement, and UOMA Beauty. If what she has in store is as game-changing and uncompromising as the work she has done thus far, it will likely be another impressive outing to hold everyone accountable and remember the value of Black lives is beyond short-lived guilt.

“It’s been really surprising and overwhelming how many people want to work with us,” said Chuter. “I expected to be completely ostracized, instead the industry said yes this is what we need, and thank you for doing it.”