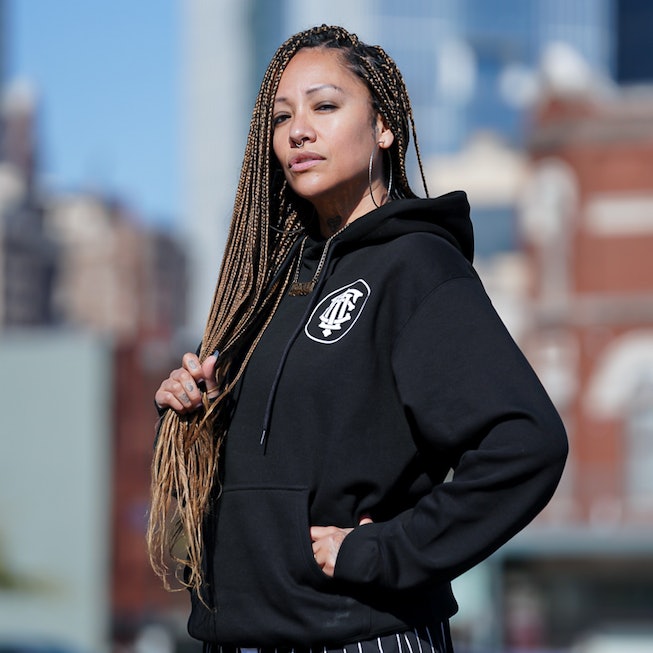 My siblings and I used to consume the Step Up dance movie series like they were candy. We were fascinated by the dedication and determination of the dancers as they landed moves, learned new tricks, and competed. We would recreate the sequences ourselves, all of us popping and locking to the beat and by the time I was in high school and college, I was practiced enough to battle anyone and everyone. I loved the crowds that cheered, the excitement and adrenaline I would feel when I nailed challenging foot work and unexpectedly dancing to the back beat of a song. Dance has always been a part of my life, so when Red Bull BC One reached out inviting me to their annual Breakdancing competition, I was thrilled.

Breakdancing, also referred to as breaking, is a form of hip hop street dance that originated in the 1970s in the Bronx, pioneered by DJ Kool Herc, a Jamaican DJ who blended percussion breaks from two records when switching from one song to the next. B-boys and B-Girls (people who participate in breaking) would dance in the space between the music, known as the break. Since 2004, Red Bull BC One has been the largest breakdancing competition in the world, where each year breakers battle for the crown. The competition takes place across multiple cities—nationally and globally—in battles known as cyphers, in order to select the 16 B-boys and B-Girls to take part in the World Finals in New York City.

As with too many things, male names predominately rule the space. But, to counter that, Red Bull became the first organization to focus on female empowerment in breaking culture. As part of that objective, the organization recruited long time breaker, Ericka “Babygirl” De Leon, to be one of three judges for the competition. Together they are working hard to reclaim the popular hip hop style and raise awareness of the impact female breakers bring to the space.

Babygirl, the original B-Girl of Houston, has been part of the breaking culture for 27 years. She says she was originally introduced by her older brother when she was eight years old. “My brother was a B-Boy and I witnessed it in my neighborhood and then in the movie Beat Street,” she says, thinking back to the gang influence in her city at the time. “I was heavily involved in a lot of things that us adolescents do when you’re part of that—but breaking got me out.” explains De Leon. “I feel like I’m in debt to it. It’s like I can never give what it has given to me.”

However, similarly to the female breakers that came before her, De Leon faced a lot of hardships when she entered the scene. Even today, female breakers I spoke to admitted many of the same difficulties still exist. I learned that those obstacles generally broke down to three major things: greater physical difficulty, sexism, and a scarcity mentality.

Breaking originated with men, so many of the moves are based on the male anatomy—often relying on muscular strength, especially of the upper body, to successfully execute windmills, stand on hands, or balance on wrists. “A lot of the movements rely on the center of gravity being higher up,” says Michiko, a 25-year-old competitor. “women’s center of gravity is lower, so it can be challenging when throwing your body around.” Because of this, certain tricks require longer training for women to develop those muscles.

B-Girls also say they often face the challenge of being sexualized or infantilized. “Women had to deal with standards of looking alluring or glamorous in order to succeed in the commercialized world,” says Ana “Rokafella” Garcia, a veteran breaker. Only recently, have female dancers been able to break out of the video vixen stereotype society like to place them in. B-Girls can find it hard to gain respect, adds Michiko. “If you do something basic you get easy props, that a guy would never get for the same basic move,” she says. “People tend to congratulate you because it’s like, ‘Oh. I didn’t expect you to do it anyways’.”

Also, for years women were pitted against one another, knowing that only one or two would be accepted into a crew. “We couldn’t have a sisterhood,” Rockefella says, “we had to compete”. And it wasn’t just breakdancing, the entire hip hop culture also didn’t offer much space for women. “Growing up you never saw women DJ’s, you didn’t see women MC’s, you never saw women in the forefront,” recalls De Leon. “It’s definitely changed in the 10 years I’ve been dancing, but I know when I started there was still a stigma and finding where you fit,” adds Michiko.

“I want sisterhood to come out of it...I need women to understand that we can love one another through the journey, and that no one woman is better than the other.”

As someone who’s been a part of the culture for nearly three decades, De Leon sees where the gaps are for women breakers and she’s made it her mission to fulfill the needs of the next generation of women in breaking culture. In 2015 she started B-Girl City, a home for girls who share the same passion as B-Boys, but not the same opportunities. The non-profit organization empowers female breakers through diversity, resources, grant opportunities, and unity via workshops and creative opportunities in Houston and beyond.

At De Leon’s facility, young people are taught how to condition their bodies to prevent injury and to optimize their steps. “My knees are filled with fluid from injuries and lack of resources to treat them at the time,” says De Leon. “I try to teach all my students the importance of understanding their bodies, stretching, yoga, breathing, and different types of workouts for mobility to improve longevity and the dance.”

But above all, De Leon is striving to create community. “I want sisterhood to come out of it,” the breaking veteran tells NYLON. “I need women to understand that we can love one another through the journey, and that no one woman is better than the other.” De Leon hopes to be a dot connector and bring as many women into the movement as possible. She tells breakers, “Just look at your sister and hook arms with her, and bring her beside you.”

At the end of the day, representation matters and strides are being made to bring more women into the scene. De Leon also advocates to get more women behind the scenes of competitions. She says that while women have been producing shows for years, not enough people are aware of their talent and their presence. She hopes the debut of breaking at the 2024 Olympic games in Paris will encourage more women to continue pursuing their dreams. “I'm really excited for the art form to have the Olympics as a platform,” she says, “it gives a whole new generation something to work harder for and encourages breakers to push themselves to the next level”. Admittedly in 2022, the breaking playing field is not yet equal, but organizations like B-Girl City and Red Bull are working to move the needle. Progress is being made, reclaiming women's involvement in the foundation of hip hop dance, and perhaps more importantly—seeing more women crushing it in cyphers.