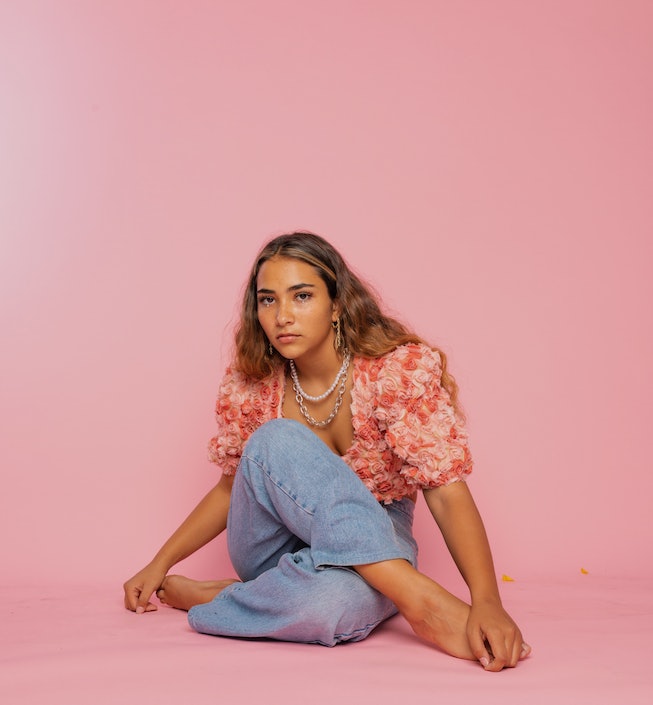 At the start of the pandemic, Sienna Mae Gomez, then 15-years-old, was living a fairly normal life for a teenage girl in California. She was making the most of Zoom school from home, vibing out to Tame Impala, and making joke TikTok videos like the rest of her friends. Then, as the story of TikTok fame often goes, one of her videos went viral — and then another, and another.

Six months later, we're still living through a pandemic. And Gomez, now sixteen, is still doing Zoom school from home, listening to Tame Impala to get herself in the right mood, and making TikToks every day. The only difference, really, is that she now has over 20 million followers watching it all play out.

The first video that went viral for is a good example of the reason her platform has grown so quickly. In her kitchen, she wore high-waisted sweatpants rolled down to show her stomach after eating, dancing to Cardi B and Megan Thee Stallion. It might not seem like anything to applaud, but seeing a cool girl confidently show off her regular body was magnetic for the sea of tweens and teens alike that flood the app. (Lizzo later copied one of Gomez's trending dances, captioned, “Body positivity has entered the chat!”) The rest of her videos followed suit, with Gomez offering body positive counter-programming to the hundreds of unrealistic beauty ideals touted by other creators on the platform.

At the start 2021, she debuted her first major beauty campaign with industry giant Maybelline. Partnering for the entirety of 2021, she'll work with the brand on various projects and campaigns tied to new launches. There's a lot on her plate, but according to Gomez, she never saw it any other way.

"It's funny because if you ask anyone of my friends, especially my best friend, they'll tell you that I always said — and it's in my TikTok bio too I was pretty sure because I've never changed it — it said 'I'm going to be famous,' or something cliche and silly like that," she shared with NYLON over the phone. "I just knew that I wanted to work in the entertainment industry. I wasn't ever sure how I was going to get there, what the path would be, but I always had that faith that I was going to be there, because that just stuck out to me, and wanting to be an influencer and a creator, and meet people and be able to do all these cool things was top of my list. And I always knew that working nine to five was never something that I wanted to do."

Ahead, Gomez spoke with NYLON about her relationship with her body, catapulting into fame during a pandemic, and her big Maybelline partnership.

Positive body image is at the core of your platform. What was your relationship with your body growing up?

I was a competitive dancer for six or seven years. Just recently I quit because of this new life. So my body, honestly, was something I looked at every day. I didn't struggle with it as much as I just compared myself to all the other girls around me, because there were so many, does that make sense?

There's girls around me that I could just look at every day and be, like, "Oh, I wish I had that from her." But I've honestly always been pretty good at trying to stay confident in myself and understanding that I only have my body and that there's no point in comparing, which has played out for me a lot in this whole social media journey. I think, I kind of got that self-confidence and self-love thing from growing up in a really accepting home, just being told always that eating is okay, whatever I was like, it's okay. Everything was out of love. So I was just taught to love my body from a young age, which is something that's really played out and been so nice for me to be able to do.

Has that relationship, and your relationship with beauty, evolved in any way since you've catapulted into this social media fame?

Well, I mean, for beauty too, there's always been a beauty standard and it's always changing, which is the difficult thing, because four years ago I maybe wanted to be super skinny with blonde hair, blue eyes, and I was beating myself up over that. But today, I'm glad that I'm the curvier looking type, and I'm glad that I have thicker thighs and a bigger butt because that's what's in style now.

It's so sad that there's always been a trendy body, but I really hope that in the future generations we can kind of steer away from that. Growing up, or recently with the whole social media thing, beauty and body has definitely been difficult, because everyone always has a say, but, I mean, it's how life goes. I'm just trying not to take anything too personally and understand that everyone is dealing with their own things.

Why did Maybelline feel like the right partner for your first major beauty campaign in partnership?

Well, I use Maybelline in musical theater growing up, [they were] some of my first makeup products. What I love most about my partnership with Maybelline is that our values, and message that we want to share with the world, is the same, which is: you're beautiful the way you are, and makeup can be used to empower and enhance you, not cover you up. And they make products for everyone, whether you're into natural makeup or multiple layers of foundation, no matter how skilled you are at application, I've found that everything is so easy to use and the formulas just feel great.

How has it been adjusting to all of this attention in such a short period of time?

Growing up dancing really prepared me for this, because I've always had eyes on me and I've always been an entertainer, so this isn't very out of the blue. I mean, the numbers are crazy, but also I've only grown or I've only blown up during COVID. So the only numbers that I see are on my phone and the people that I meet in person, but it's not like huge crowds. I'm a very visual person, so it's honestly hard for me to envision that many people watching me. So crazy that I don't think I've ever really processed it.

What would you change about the relationship dynamic that you, as a creator, have with your fans? Do you feel like you have a lot of pressure to act in a certain way or say the right things?

I don't know if I would change anything. Something I would just want them to know is that we're normal people, too. We're humans. And I think that a lot of time social media influencers and celebrities and entertainers get pegged as a robot, or just somebody that's made to produce content, but really, we're all going through things.

I think that sometimes, if I put out something that's a little more emotional — I haven't personally put out anything bad or crying or done anything like that — but even when I'm not smiling in my videos, people assume that social media changed me or something like that. But if you want to be authentic and genuine, you have to really just show all your emotions, you know what I'm saying? It's hard to be authentic when people are constantly giving their opinion and judging.

Does your relationship with other creators, on TikTok specifically, help you navigate through some of that?

Oh, definitely. I mean, I know that when I'm having a problem, I'm not knowing what to put out or feeling unmotivated or lack of content or something, I always call my friends and I'm, like, "Hey, I really just don't know what to do." And we're all in the same boat, so it's nice to talk to people that understand. They're always giving good advice. We all forget at times that we're humans and we don't have to produce 24/7, and we all just kind of remind each other of that and that it's okay to take breaks for mental health, and it's so important, too. It's definitely been nice having people that are of a similar category and that understand what I'm dealing with.

Especially on TikTok, viral fame can come so suddenly. What advice would you give to other creators your age working towards a similar path?

I would honestly say to just trust the process, because I know that for me, I would always get so overworked that I wasn't doing enough. But good things do come when you put them out there. Just be positive, be kind. People go on social media to escape from whatever they're dealing with in real life, so nobody wants to go on social media and see negative things towards them or a negative place. Social media is all of our escape, and that's why so many people just like to get away. It's important to just be human and encourage others. And if you're trying to take the same route, I would just encourage you to be yourself and be a kind person.