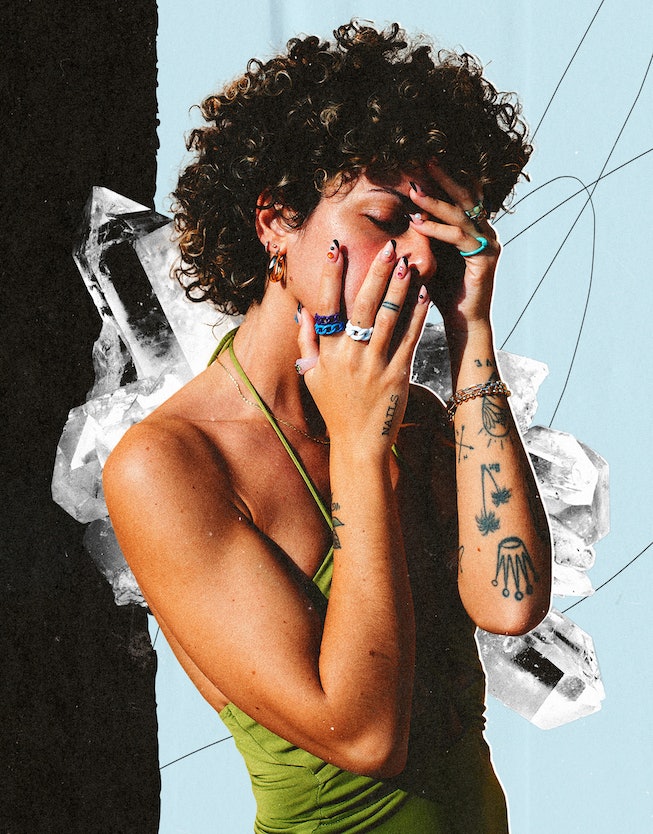 When getting a tattoo, it’s only expected to agonize a bit over the design. “Will I still want this when I’m older”, or “Could this be misinterpreted in the future?” are practical and thoughtful questions to consider before committing to permanent ink (especially considering the countless tattoo fail posts circulating the internet). You also might spend time finding the perfect spot, ensuring it looks good, is symmetrical, or is located in an area you want to show—or not show. However, you might not necessarily think about what tattooing that part of your body means for your spiritual energy. Maybe you should.

Last month, Julianna Mallozzi posted a video on TikTok that got over 1.7 million views. The video outlines the spiritual significance of your chosen tattoo placements. In it, and in a part two video that followed, she detailed the specific spiritual meaning of different body parts and recommended ideas and designs to tattoo for each. According to Mallozzi, every tattoo has a spiritual purpose. For instance, an ear tattoo may represent what influences you’re listening to. Or you may want to tattoo something you are looking to “embrace” on your arm.

Getting a tattoo on your chest or torso is “one of the most vulnerable places energetically,” according to Mallozzi, so it’s best to get something extremely personal. The 21-year-old who is based in Florida recommends getting your favorite angel numbers tattooed as a small, entry level tattoo and says thinking about where you place your tattoos could, “open up doors for you, spiritually speaking.” “Everything has a purpose,” she says. “If one is being mindful when it comes to where they place their tattoo, they may feel surprised as to how comfortable that tattoo feels being placed right where it belongs.”

In the viral video, Mallozzi also explains that connecting with the person tattooing you is also important, as their energy is being put into you as they tattoo your skin. “Feel the vibe of the person you are thinking about getting tattooed by. And I mean really feel their vibe,” she says. “Their energy will tell you everything you need to know. If the energy is calm, communication flows smoothly, they are willing to cater to your needs, and you enjoy their work—congratulations. You’ve found yourself your perfect tattoo artist.” She says this only comes around “once in a lifetime.”

Mallozzi is pleased the video has opened up the conversation for people as she believes “tattoos coexisting with their best-suited body part” can cause an energetic shift. As for popular tattoo placements and their meanings, she explains that the shoulders represents the burdens you carry, the face represents the energy you’re putting out into the universe, the lower back and abdominals represent sexuality, and the lower legs represent what you’re working (or moving) towards. The meanings can get even more specific, with your right hand representing what you give versus your left hand representing what you receive. Your neck is where you hold all of your emotions and your ankles represent balance and support.

Porsche Little, a Los Angeles diviner, thinks that the reason why spiritual tattoo placement is now a growing conversation is because Gen Z traits are partially defined as being “more intentional”. Along with the physical placement, she thinks it’s a good time to remind people reflect on their tattoo designs in totality. “It's important for others to truly understand culturally what they’re getting tattooed. There are a lot of people who will get Buddha tattooed who aren’t Buddhist or get an African tribal figure tattooed, without knowing the tribe,” she says. “I would recommend studying the history of these tattoos before doing so because you don’t know who you could offend. Or if that energy even aligns with you ancestrally.”

Little says the spiritual knowledge relevant to your personal tattoo placement comes from “whatever culture you’re from.” “In most regions of Africa, people were able to tell what tribe they belonged to just by looking at their tattoos. where they were placed and how they were placed also gave them more information,” she says. “But in American culture, it's okay to get silly tattoos like pancakes, or a bowl of cereal. So, honestly it just differs on where you are.”

While Little doesn’t want to tell people what to do with their bodies, for those interested in her perspective, she recommends arm placements for a first tattoo. “Culturally, it's one of the most popular spots and it also leaves room for you to save time to really meditate on where you’d get more significant tattoos (like your face, your back, your hands),” she says. Little also says that getting a tattoo like an ankh on your leg versus your third eye means you’ll be held to a certain standard by others. “If I were to see someone with a tattoo of something related to my tradition on their forehead, I’d assume they knew the ins and outs of it,” she says. “So be ready to measure up to that.”

Since tattooing is an ancient practice that traces back to many cultures, what a tattoo design means to one person won’t be a universal standard across the board. The same goes with placement. However, Mallozzi’s video does serve as a much-needed reminder of what Indigenous tattoo artists have been sharing for years: tattooing isn’t just body art but a deep-rooted tradition. Whatever your background or spiritual beliefs, everyone can benefit from taking the time to choose a thoughtful (and culturally appropriate) tattoo design and carefully consider the place you want it tattooed on to you forever.

NEXT UP
Beauty
12 Lunar New Year Beauty Releases To Ring In The Year Of The Rabbit
Beauty
11 Aquarius-Inspired Nail Art Ideas For the Unpredictable Season
Beauty
This Viral Black Honey Lipstick Dupe Is Only $5
Astrology
Get To Know Aquarius, The Certified Freak Of The Zodiac
Style + Culture, delivered straight to your inbox.