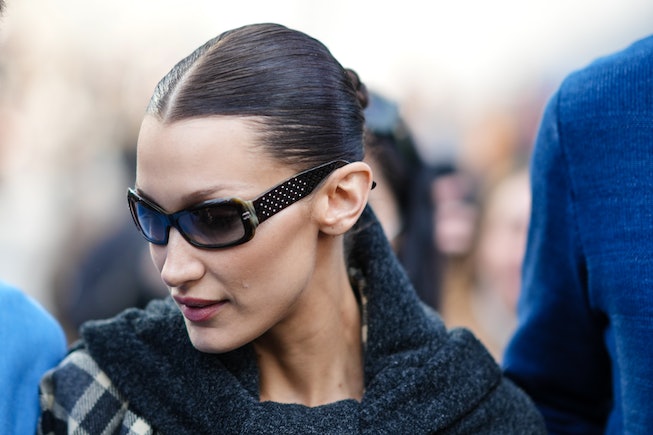 In recent months, eyebrow trends have become more experimental, including shaved brows, bleached brows, and even dyed brows. This, it seems, has all been in the lead up to a divisive trend return—the Y2K over-plucked skinny brow. While thin eyebrows have been making a slow return over the past year (with Euphoria star Barbie Ferreira sporting line-drawn eyebrows to the 2021 Met Gala, Bella Hadid’s own eyebrows have been gradually getting more scarce, and FKA Twigs wearing her eyebrows pencil-thin for the “Sum Bout U” music video by 645AR), these days it’s not a mainstream beauty trend until TikTok says so. Thus, with the launch of the new “Y2K makeup filter” on the app, skinny eyebrows have been confirmed as the eyebrow trend set to take over 2022.

On TikTok, people are using the new filter to try out the look, with some saying it’s inspiring them to pluck their eyebrows IRL and others comparing their appearance to their own mothers in the ’90s. True to the Y2K theme, the beauty filter also adds pumped up eyelashes and dark lipliner. The trending filter comes after Instagram’s bleached eyebrow filter, which people also used to try out the beauty trend, leading to its virality.

Thin eyebrows were a staple of 2000s-era fashion, when the likes of Paris Hilton and Christina Aguilera over-plucked and sometimes drew super thin and arched eyebrows back on. After a generation of over-plucked brows (some of which never grew back, like our mom’s and aunties have warned us about), the last trend cycle has been dominated by the brushed-up, bushy brow look. In spite of the fact that many people have been condemning the thin brow trend for the past decade, Nollywood film scenes many of which have gone viral via Instagram still showed the look proudly. As well as the drag community, which has always embraced a dramatically thin and arched brow. It’s these communities that we also owe this iconic revival.

While beauty filters on social media apps like TikTok and Instagram often bring about debates (as some are used by children and have face-altering, plastic surgery-like features), the trending Y2K filter is a prime example of what beauty filters should be used for—having fun and trying new trends without actually having to commit to them. As Gen Z is inspired by how they look with thin eyebrows online, many will no doubt take the plunge and reach for tweezers (or a razor if you’re worried about overplucking). Others will just enjoy the one-off nostalgic throwback. Either way, get ready to see more thin eyebrows everywhere, both on your screen and out on the streets.