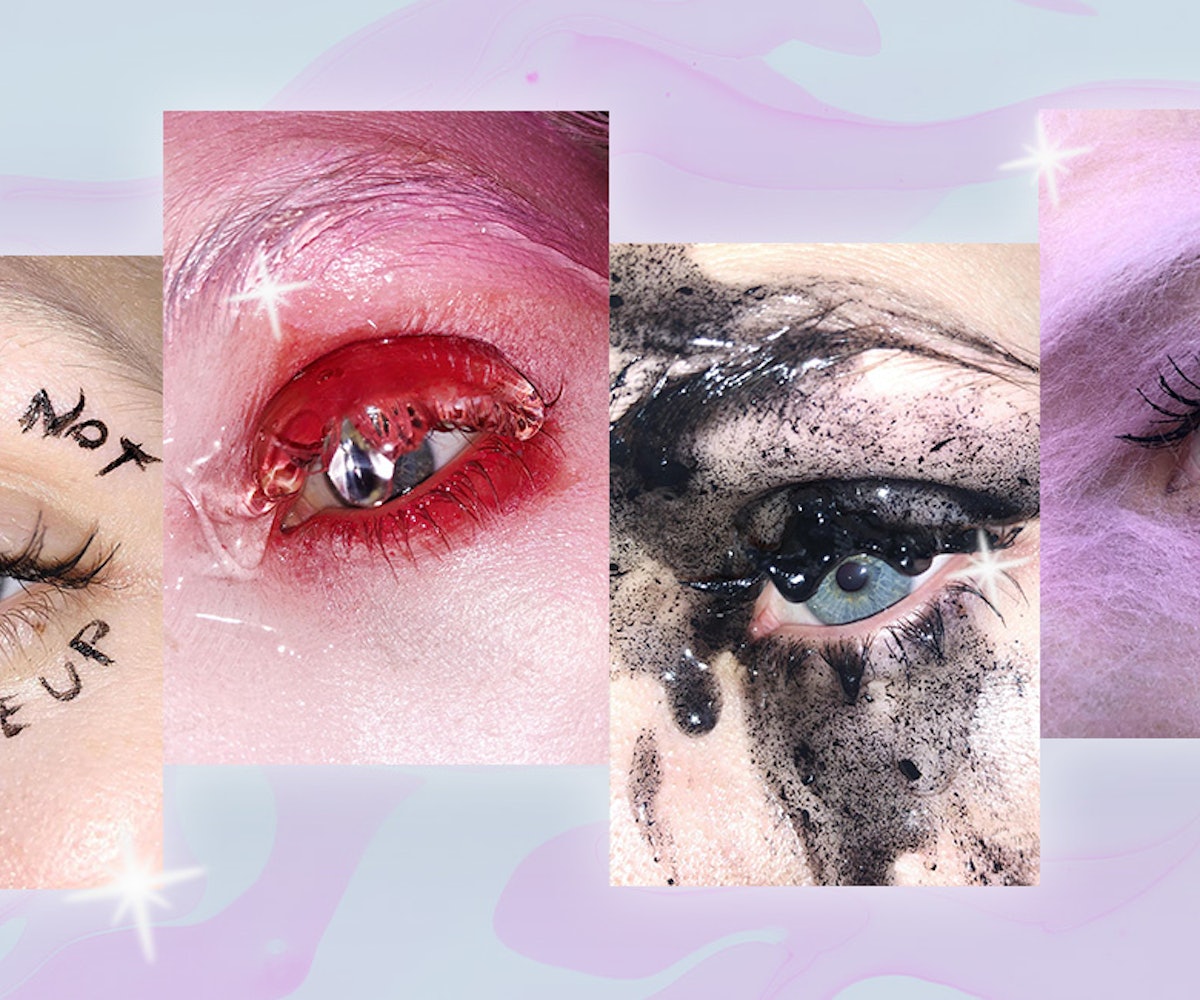 Instagram beauty has only gotten more expressive these past couple of years. No longer are online beauty communities obsessively contouring and painting their faces to appear conventionally pretty. There's a new generation of makeup artists, most of whom come from self-trained backgrounds, doing things their own way — and no other Instagram account is more representative of this phenomenon than Ugly Makeup Revolution.

The account, boasting nearly 25k followers, showcases some of the most intriguing beauty looks from a community of makeup artists from around the world. Clementine slices as lashes? Check. Paint-splattered skin in the most unusual shapes and colors? Check again.

Eszter Magyar, a Berlin-based makeup artist and makeup activist, is the founder behind the Ugly Makeup Revolution account. She also runs the popular Makeup Brutalism account (46k followers and counting), where she posts her own work, which consists of images featuring little plastic babies glued to her lids (see below) or colored contact lenses dripping out of her own eyes. "I got comments that my looks are ugly a lot," explains Magyar. "That's where the whole story of Ugly Makeup Revolution began."

Since Magyar founded Ugly Makeup Revolution, it's become a goal of many out-of-the-box makeup artists to appear on the page. Magyar personally scouts each and every look she posts, but there are also a lot of makeup artists who tag the page when creating unconventional works of art. "I had a conversation with someone about how 'ugly makeup' will be the new Kim Kardashian [beauty trend]," explains Magyar. "It was a joke, which manifested itself into a hashtag. So I started to use it. After a few months, I checked and saw that other people were using it, too. I saw thousands of posts of amazing content. The community came alive even without me noticing, so I thought maybe I can try to create a platform, where I can collect the best looks, which are proudly and loudly 'ugly' which, of course, means irregular in this case."

Magyar finds inspiration in the mundane and the conceptual for both of her Instagram accounts. "I always love to experiment, with textures, shapes, finding the boundaries of makeup," she says. "Can you make an eyeliner without a line? How temporary should a look be to be considered as makeup? Is makeup only for the face? Sometimes circumstances help me a lot too; if my skin breaks down from too much paint, and I do not want to use any, I have to use something else, like paper, smoke, contacts, onions, teeth, etc."

According to Radioactive.Pigeon, the mastermind behind the aforementioned clementine look, the idea and perception of beauty are being turned on their head by Ugly Makeup Revolution. "I think makeup is becoming increasingly freed from its boxed-in definition of making someone attractive," she explains. "I love the idea that makeup and art have an inextricable relationship in the way Ugly Makeup Revolution frames it. It's very freeing. It also forces the viewer to reconsider even the most mundane props and objects in terms of their aesthetic qualities. A lot of things suddenly become beautiful when you forget what they are."

For Deathlessvogue, who has become a part of the Ugly Makeup Revolution community for her smeared glitter and gemstone looks, the account symbolizes a change across the beauty industry. "There is quite a movement right now with accounts promoting this style of 'different' makeup," she says." It's clearly becoming a trend. I think a lot of people would benefit from Magyar's line of thinking and artistic discourse, for which I'm really happy about all her progress with this movement. If everyone uses the hashtag or enjoys the account or shares her vision, maybe makeup would be understood in a different and more open way."

Adds community member maretubaleht, "I think Uglymakeuprevolution does play a role in the larger democratization of beauty. Beauty, especially individual presentations of it, is becoming more creative. Eyeshadow is not just for eyes, lipstick is not just for lips, and rules are not to be followed. And, in my opinion, the larger consumer base is slowly becoming more acceptable to different forms of beauty-representation."

Yet even with the community she has built, Magyar still receives negativity on her posts from time to time. But many times, it's what pushes her to move forward. "I learned one thing for sure: If you are posting controversial content, you will receive a lot of hate and judgment," she says. "But at the same place, it helps a lot of people to do their thing, create fearlessly and not feel weird about it, so it's worth it. As a community, we are stronger and braver than as if we were alone. People should be more open-minded, act more intelligent, and just respect each other's opinions and choices, not just related to makeup either."

Adds community member Theashleevaughn, "Yo any artists out there just learning about this account or trend online, try something ugly out. Smear some makeup on your face, throw some glitter on it… don't be afraid of the ugly!"