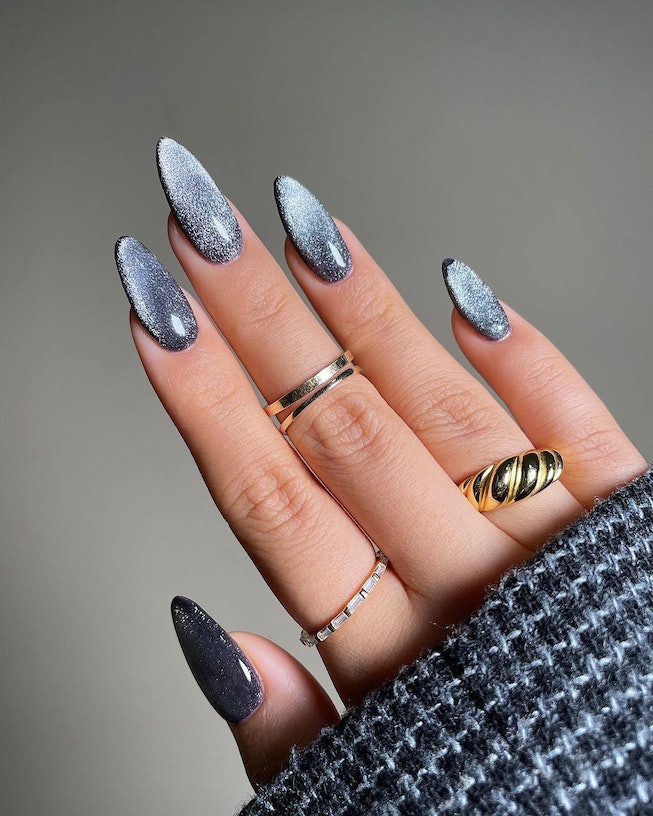 by Laura Pitcher
November 17, 2022
We may receive a portion of sales if you purchase a product through a link in this article.

As we enter the holiday party season, one of fashion’s most divisive fabric textures comes out of hiding—velvet. Known for its 3D look and its unique texture and feel, the fashion industry often can’t decide if it loves or hates the material. The beauty industry, however, has completely fallen in love with velvet in a new way. Enter velvet nails: a glistening, dimensional manicure that utilizes lighting to give the appearance of texture.

Velvet nails first had their major moment in 2020, when nail artists like Amy Le were sharing their take on the trend. Since then, the manicure trend took a small side step out of the spotlight (making way for Hailey Bieber’s “glazed donut” nails to be a reigning trend of the later half of 2022) only to return at the end of the year with a big bang. The hashtag #VelvetNails has over 11 million views on TikTok alone and countless tutorials have recently gone viral across all social platforms.

Even if you’re not a fan of wearing velvet in your everyday winter wardrobe, you can still love wearing a plush-looking manicure. Here’s how and why you should add the velvet nails to your cold-weather nail art rotation.

What Are Velvet Nails?

Despite the name, velvet nails don’t require you to put anything fuzzy at the end of your fingertips. Instead, the visual velvet effect is achieved by using specific magnetic nail polishes also known as cat eye nail polishes. When you place a magnet near these nail polishes before they dry, tiny particles in the polish react to the magnet creating the textured look. You can opt to get velvet nails done at the salon or with the right products you can also achieve a similar effect at home.

How to DIY Velvet Nails

Using magnetic polishes can be tricky, as they require you to work fast while polish is still wet, otherwise the magnetic particles won’t move. In one viral TikTok, skincare content creator “Selfcare In Pajamas” outlined the process of using magnetic gel polish that you cure with UV light. First, she starts with a white base and then applies two coats of the glitter polish. While the first coat is wet she uses a magnet to create a the desired textured effect before curing with the UV gel lamp, and repeating the process for the second coat. Finally, seal it with a top coat. The process is the same for non-gel nail polishes other than the curing.

There’s a galaxy of colors in this multichrome polish that shifts dark red, pink, gold, and green.

While velvet nails are the main character in their own right, the texture can also elevate a number of other designs, including french tips and matte stars. When choosing the color of your velvet nails, give yourself the permission to get moody with it— with black velvet nails adding a goth take on the trend and two-toned nails adding even more dimension.