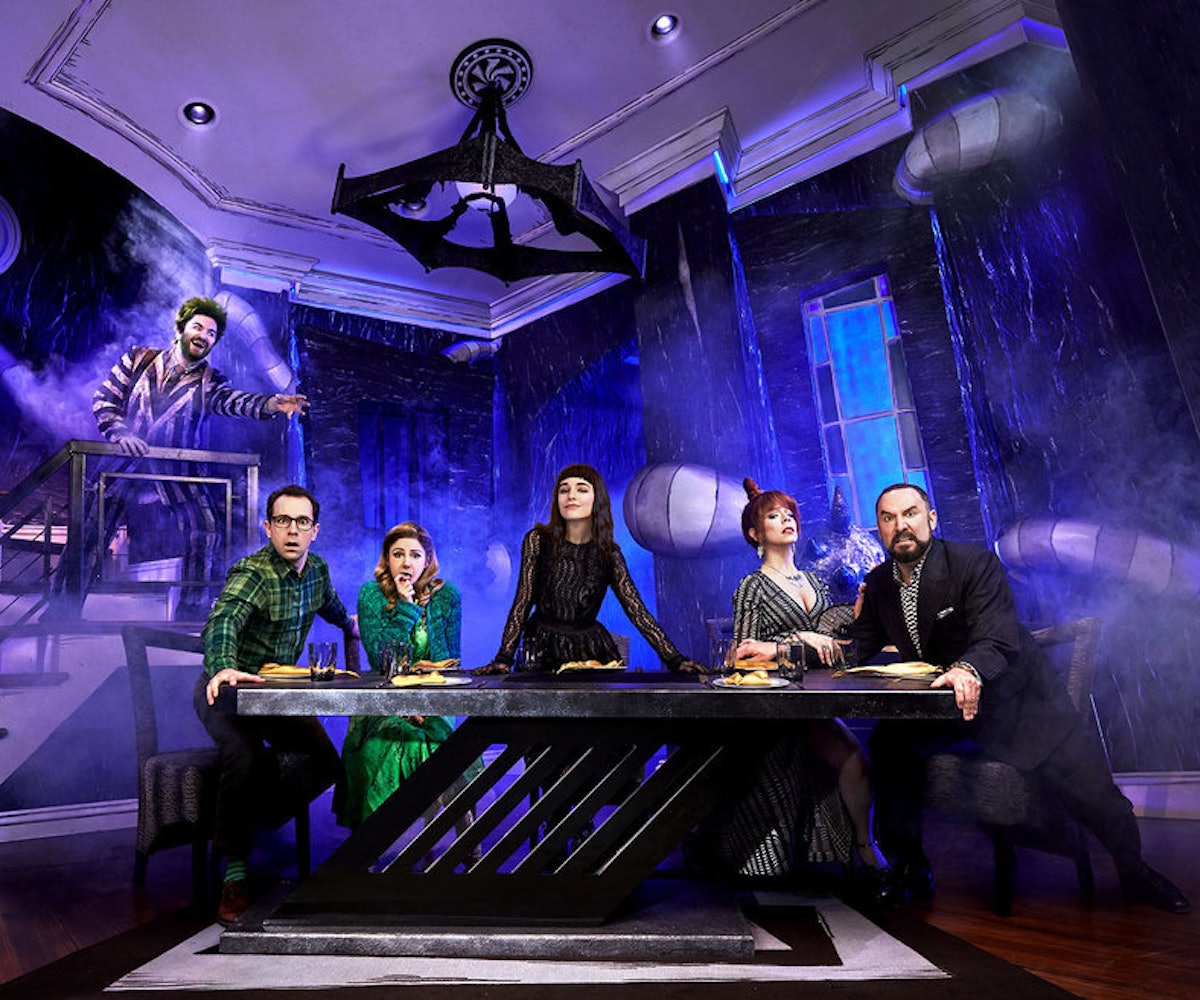 I love Beetlejuice. I once watched it three times on a flight from Europe. To be fair, I'd only meant to watch it once, but I couldn't navigate the screen controls and ended up rewinding it twice. Even after that, though, I still can't get enough of Tim Burton's colorful take on the afterlife. If you've never seen it, it's a dark comedy about a poltergeist named Beetlejuice (Michael Keaton) who terrorizes both the living inhabitants and the recently deceased ghosts/former owners of a house in Connecticut. In this 1988 classic, Burton reimagines the first stop on the "other side" as a recognizably dull waiting room (admittedly full of rather colorful characters, but still), rather than an abyss of nothingness. Some of the deceased include a blue-skinned beauty queen, an entire football team that perished in a car crash, and Juno (Sylvia Sidney), a caseworker assigned to help newly deceased people pass into the afterlife peacefully.

On first viewing, I instantly identified with Lydia Deetz (Winona Ryder). Lydia, along with her parents, moved into the house haunted by its former owners, as well as Beetlejuice. Lydia served peak goth fashion and beauty looks, with spiked bangs and all-black outfits; she was the master of her own self-invention. She was also pretty unhappy because of how much she hated her stepmother, Delia (played by Catherine O'Hara), a sculptor who is constantly trying to stifle Lydia's creative expression. Like Lydia, I wanted independence and to dress in head-to-toe black, and I also felt just as misunderstood by the matriarchs in my life.

In the '90s it was Lydia—right along with the Spice Girls, Powerpuff Girls, The Craft's Rachel True,and rappers like Trina and Lil Kim—that helped me identify with an alternative version of femininity. Before I knew what feminism or gender norms were, I was searching for loopholes in the narrative that, in order to be a good girl, I needed to be happy, palatable, positive, and presentable all the time. Lydia represented the rebellion against those norms; Delia represented the enforcement of them.

But that's all changed—there's a new Beetlejuice in town. Thirty years after it graced the screen, this story has come to Broadway as a musical, and it's been updated for the new millennium. Directed by Alex Timbers, and with a book by Scott Brown and Anthony King, it offers a familiar, but fresh, version of the characters with whom I once fell in love—and those with whom I didn't, specifically Delia.

In the film, Delia was a self-absorbed artist, interested in undeserving clout and climbing the social ladder. The best thing she had going for her was funky-baby hair designs. But, on stage, she's toned down, sticking to wrap dresses and an updo. This Delia (Leslie Kritzer) is a life coach who is secretly sleeping with Lydia's (Sophia Anne Caruso) dad. Delia vapes, meditates, and confronts Lydia's grief with the insistence that positive thinking will make her depression go away. We're meant to find her annoying, but she's my new favorite character. Delia offers reinvention as a perfectly acceptable part of human evolution, not a display of weakness or inauthenticity. She has a kinky side that she's proud of, and she's not afraid to confront the demonic asshole trying to ruin her new house and her new relationship.

Back when I was obsessing over '90s icons like Lydia, I was still trying on all kinds of different versions of the girl I thought I should be. This went on well into my 20s, until I settled on the version of me that I wanted to be. Revisiting this story, though, it isn't the petulant, teenage Lydia who appeals to me any longer, rather it is Delia, the grown woman, who is unapologetic in her refusal to stop chasing after her own joy, who reminds me what I'm living for: myself, and my happiness.