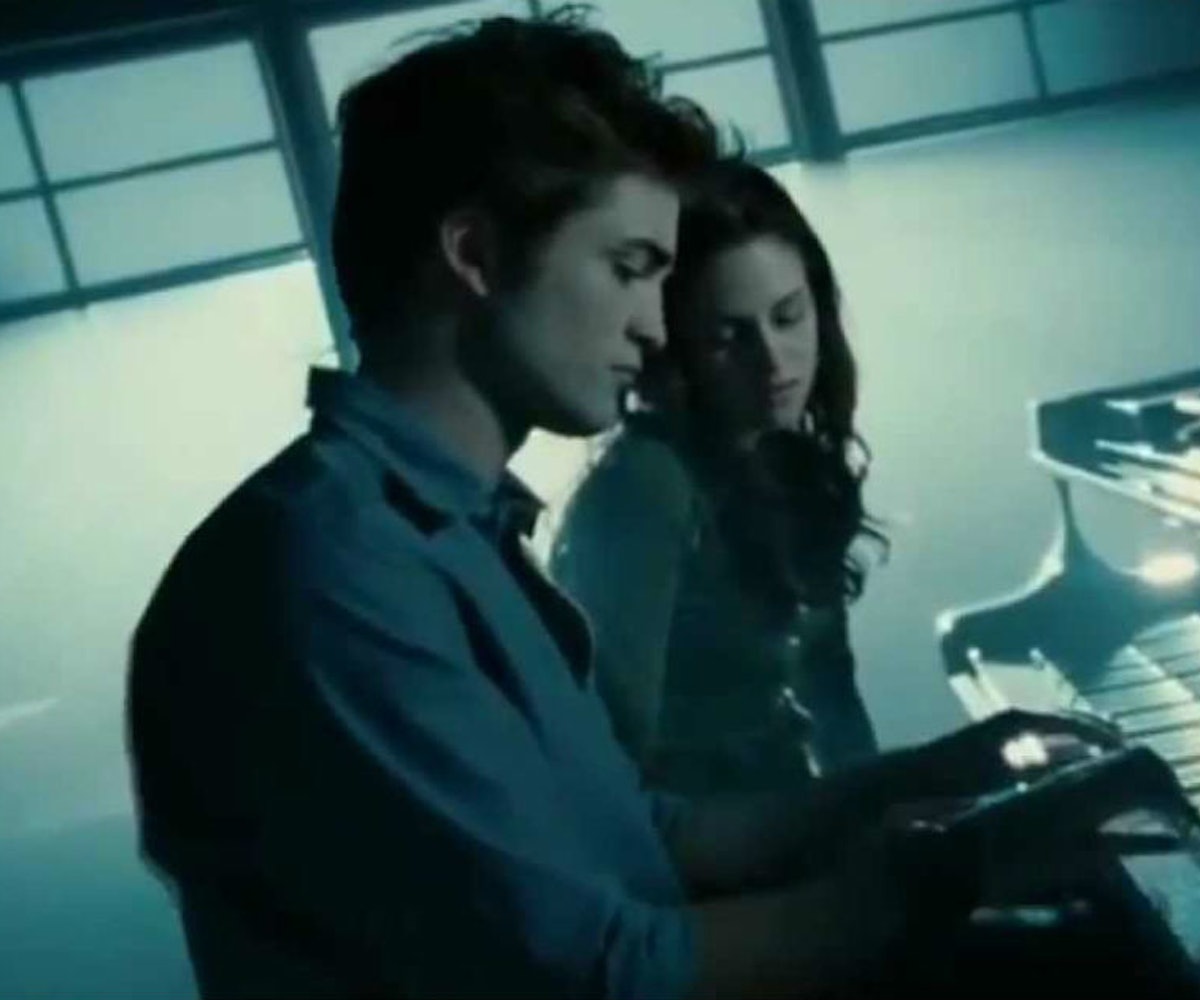 Carter Burwell has composed the music for more than 80 films, including No Country for Old Men, The Blind Side, and Where the Wild Things Are (for which he received a Golden Globe nomination), but it's a love story involving vampires that ended up being Burwell's most talked about project. We're talking, of course, about Twilight.

"Most of the films that I work on don't have that level of popularity," Burwell tells us. "I mean, I guess you could say pretty much all the films do not have that level of popularity. And also the appeal of the films that I do is to a completely different group." So, one could say he wasn't exactly prepared for the thousands of emails that overwhelmed his inbox after he wrote the instantly iconic (amongst Twihards) song, "Bella's Lullaby." Or that this song would become one that hundreds of teenagers would learn how to play on the piano. Burwell didn't expect a piece of instrumental music he composed to elicit a fangirl response, but then, weirder things have happened in Stephenie Meyer's world (like shimmering vampires and werewolves fighting for the love of a human, say).

In the Twilight universe, "Bella's Lullaby" is a song composed by Edward Cullen for Bella Swan. He often plays or hums it to her when she's falling asleep or has had a bad dream, but Burwell didn't create it with those motivations in mind. In fact, he'd already written it before he was even brought on to work on the film.

"'Bella's Lullaby,' as it appears in this film, was not written to be a lullaby, but to speak of love—ecstatic, tormented love," Burwell writes on his website. "Years ago, I was in love with an amazing and challenging woman named Christine Sciulli. She left me, I was heartbroken, and I wrote a piece of music that tried to express the thrill and pain of having my heart pierced. She wouldn't speak to me, so I sent her the music to speak in my place."

That story of lost love has a happy ending—Sciulli and Burwell later married—and so there's some poetic justice in the fact that the song also unites two lovers with a complicated history and, ultimately, a happy ending. It also makes sense that Twihards everywhere would become obsessed with it. "I run into people who are my age who say, 'Oh, my wife loved Twilight, she listens to 'Bella's Lullaby,'" Burwell says. "It's hard to predict the people who it would have an impact on, but it definitely affected a lot of people in a way that's pretty qualitatively different than most of my scores."

Ten years after the movie first premiered, Burwell still hears from fans, though not nearly as much as he used to. "I mean, it was a flood," he explains, but with the anniversary here, he might want to prepare his inbox again.

Ahead, we chat with Burwell about the song, the pressure, and what it was like coming back for Breaking Dawn.

Do you remember the first conversations you had with director Catherine Hardwicke about the music for the movie?

She sent me the script, and I knew nothing about the books at that point. I read the script, and I think my first reaction was that it didn't seem like my cup of tea [laughs]. You know, whether or not you think it's melodramatic, it's very romantic and completely sincere. There's no irony really in it. And it seemed like it would at least be very difficult for me, and I wasn't sure why Catherine was interested in me doing it. It seemed like other composers might be better. And she seemed to feel that I was wrong about this and that I was just a terrified person and she wanted to convince me, so she flew me out to Portland, Oregon, and showed me some of the footage and we talked about it some more. And she convinced me.

Was there something specific she said that convinced you?

I knew a little of Kristen Stewart shortly before that. I don't know if Rob Pattinson had ever had a leading role, but she showed me some scenes that they had shot, and I could see that Catherine had gotten something special out of the actors. And she was certain that I would be able to bring something new to it. Something unexpected. And I have a lot of respect for Catherine as a director, so I decided to take her word for it.

You hadn't read the books prior, but once you found out that it had such a strong and intense following, was there any added pressure?

[Laughs] Well, yes. The pressure only intensified over time. I don't think even some of the entertainment who were making the film really knew the depth of eagerness that this audience had for the film. I think the last book, I'm not sure when it came out, but it was around the time that we were making the film and the phenomenon was growing the entire time.

Back when I went to visit Catherine in Portland, she had just gotten a memo from Summit [Entertainment] saying that they wanted to add a scene to the movie that wasn't in the script. It was the scene in which Edward plays piano for Bella. And that's, of course, "Bella's Lullaby," [which] is what he calls it in the books. But it hadn't been in the screenplay because it just wasn't important to the story. However, Summit was following what people were saying on blogs, the fans and people were eagerly wondering, What music are they going to use for "Bella's Lullaby"!? What is it going to be!? And so Summit began to realize that this was an important opportunity that they couldn't miss. So they went ahead and shot a scene—although the music, of course, had not been written—with Rob sitting at the piano with Kristin. Then later, when I had written "Bella's Lullaby," they actually played the piano so his fingers would match the piece. I guess that was just an example of how Summit was becoming aware of this growing anticipation for the film and even for the soundtrack.

You made "Bella's Lullaby" before you were requested to compose it, and it was about your now-wife. Has the meaning of the song changed for you at all over the past 10 years?

It hasn't changed for me, but, of course, it became something different. Something that's out of my hands and goes out into the world, it does become a bit different just in the sense that it now means something to all these other people, too. But for me, no it hasn't changed at all.

I think it's interesting because the soundtrack features everyone from Paramore to Linkin Park, yet this instrumental song is what really, to borrow a phrase from the book, "imprinted" on a bunch of teenagers. Did you expect it to resonate as much as it did?

I was surprised. It's not because I didn't think people would like that piece of music, but of all the films I had done, I had never gotten that direct response from fans. It's not typically like that being a film composer [laughs]. I'm very happy being sort of hidden from view and usually prefer to not even get involved in that relationship with these people I don't really know, I'm just a private person. But in the case of Twilight, there were so many e-mails, I mean thousands, from people who were mostly young and very sincere and they really wanted to know how to play "Bella's Lullaby" and things like that. I did try to answer them because I did feel like these people were serious and because the music means this thing to them.

I read the backstory that you wrote on your website a couple years ago about the song, and you mention a disagreement with one of the executives of the movie who I believe wanted to change the opening note. He didn't like that it started out sort of sad and said that teenage girls wanted a sweeter, simpler tune. You write that you thought that that was somewhat condescending, and I think the fact that the song was so popular kind of proves your point.

I think so, and I think that probably even the executive in question would agree with that now. I guess it was an ongoing challenge making the movie because, let's face it, the studios are not run by teenagers, and so what you have is a bunch of older, mostly men trying to hypothesize about what this audience is going to want and you often run into some condescension there. Not always, and, of course, if people have teenage children, hopefully, they have a sincere understanding and relationship about what it is to be that age. But, I think sometimes they don't, and I think that was the case in this case. This executive had young children, but they weren't that age, and he just had some idea in his mind about who the audience is and what they would accept.

You worked on the first film, and there was a petition created to bring you back for the final films. Were you already signed on to do Breaking Dawn when the petition came out or did the fans convince you?

I wasn't aware of a petition until you just mentioned it [laughs].

Basically, what happened was when they chose Bill Condon to be the director I think; within a day of that being announced, Bill called me and asked if I would come back and do the last two with him. Because Bill and I already worked on at least two films, maybe more. First, Gods and Monsters and then a film called Kinsey and so, yeah, it was just a coincidence that he was now directing a Twilight movie and I composed the first Twilight movie. But, we both agreed that we should take advantage of that coincidence and we could bring back "Bella's Lullaby" in some form because it hadn't been used in the second and third films. And, of course, in Breaking Dawn, we were much farther along in the story, and it would need some material for their marriage and the birth of their child, but we did like the idea of being able to hearken back to "Bella's Lullaby."

How was the approach making music for the final film, when Bella and Edward are older, different than the first?

It's a little different. Not so much because they are older, but that the story has really gone into a different place. In the first Twilight, one of the things I really liked about it and still do is that it takes place in a basically "normal" context. Bella's going to a "normal" high school with supposedly "normal" kids and leading the life of a "normal" teenager and then she encounters things that are unexpected. You sort of are gradually shown that there's more to the world than you know. And that's of course part of adolescence, and by the last two movies, all pretexts of normalcy have gone away [laughs] and it's really pretty over-the-top, right from the beginning. So, that just makes it very, very difficult. Nobody is a normal teenager anymore, and it's really all about the sort of world spanning battles between different groups of supernatural beings and things like that. It's just a completely different story, in my opinion.

NEXT UP
Entertainment
Meet Amy Allen, The Grammy-Nominated Songwriter Behind Pop's Most Honest Hits
Culture
The Madonna Biopic Is Being Scrapped
Entertainment
Harry Styles Is Performing At The 2023 Grammys
Entertainment
Raye Explicitly Speaks Her Mind On Debut Album, ‘My 21st Century Blues’
Style + Culture, delivered straight to your inbox.