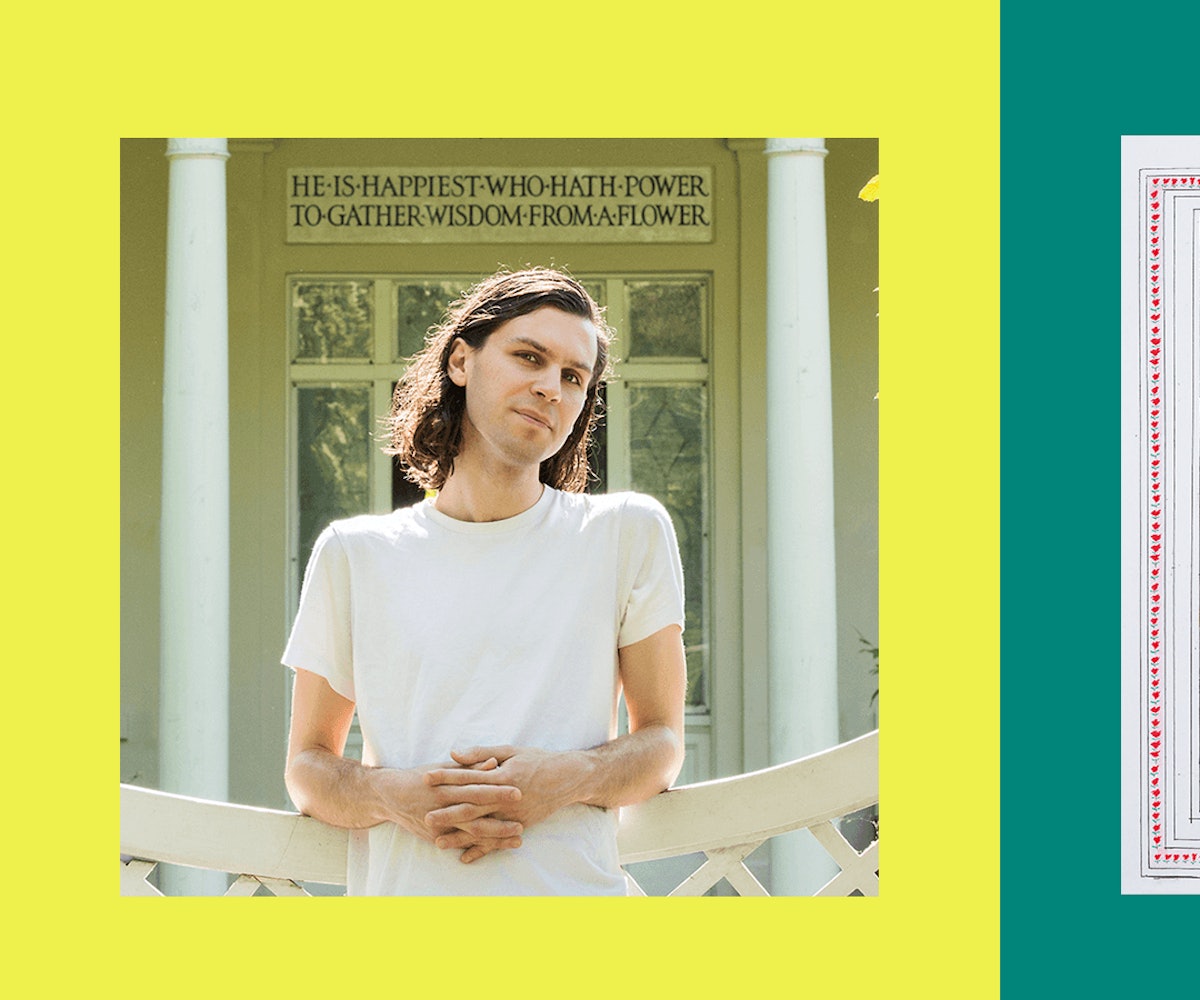 Oliver Kalb, the guiding force behind the bedroom pop act Bellows, would be nothing without his musical community. While most of Bellows' music has originated in solitude, Kalb is plugged into several other musicians that comprise a busy subset of the New York DIY community. Thanks to close relationships with bands like Florist, Frankie Cosmos, and Told Slant, Kalb has been able to thrive in a community that's just as likely to help with one another's albums as they are to go on tour in their band. Case in point: I first met Kalb on tour with Gabby's World, traveling behind last year's exceptional Beast on Beast, which Kalb helped record.

But just because Kalb thrives in large part thanks to the intimate musical community that's bubbled up in the last few years doesn't mean everything is rosy. In fact, feelings of alienation and estrangement from many other DIY acts, particularly within the wider climate of fear and loathing in the Trump era, serve as powerful undercurrents in The Rose Gardener, Kalb's fourth album under the Bellows moniker. In the album notes, Kalb suggests that it was driven in part by the question of "why our counter-cultures were paralyzed and unable to respond, so wrapped up in the narcissism of small differences that they forgot to fight the actual bad guys."

Still, Kalb hopes that The Rose Gardener can serve as a hopeful image in the face of so much uncertainty. "I imagined this character and his practice of tending to a rose that seems destined to perish in ice, who recognizes the futility of the work but nevertheless goes out every day to tend to the dying plant," he writes. Even with all of the hazards that come with living in these fraught times, The Rose Gardener is a plea to get closer to a sense of beauty, no matter how thorny it may be to bring it to life.

NYLON asked Kalb about his recording process, what happens to musical communities when the rent is too damn high, and how he imagines an alternative for musicians everywhere.

Bellows is at once your own solo recording project, as well as something that connects you to a lot of other people. How much of this album originated in your isolated recording space in Woodstock, and how much was the product of the community in which you create your work?

This one turned out to be a lot more collaborative than any of the previous Bellows albums, which was sort of new territory for me. But basically, the way the album was put together, I had this very soul-crushing job at Barnes & Noble a couple years ago. I was working at the big six-level one in Union Square over the holiday season, doing the holiday retail grind, where there are just infinite people in line, greeting people. It was a degrading experience, and I kept asking myself, Would I really prefer to be doing this than making a record?

So eventually I quit the job, and used the money I'd saved up working and just decide to grind out an album, and write and record it in this space I set up in Woodstock. The way it came together, I was writing and recording these songs alone, then contacting different friends of mine in the music scene and busing them up on the weekends. For example, I had Felix Walworth, who's the normal drummer for Bellows, come up on a bus and work on drums together. There were probably seven or eight people that I did that with, but it was cool because it was always one-on-one with each of these collaborators, talking about what kind of atmosphere we were going for with each song, and figuring out how just the two of us could make something interesting happen.

The title of the album, The Rose Gardener, is meant to invoke a sense of loneliness you described in a moment in which it seems harder and harder to find beauty in the world. Still, The Rose Gardener tends to beauty, accepting the pain of living in order to create something wonderful. It kind of seems like something similar was happening in sharing the music you were making gradually with people you care about.

It's really important to me that people that I collaborate with had a sense of the atmosphere and mood of the song before we go into it, that we have the chance to touch base about what the song is about, the kind of dynamic motions of it are gonna do. I find that that's way easier in a one-on-one context. Bellows has always been a bedroom recording project for me: the distinction I make is that we've never recorded with a full band setup all playing live together. There's always a baseline of starting the song alone and then bringing people and layering over and over again to create something fully orchestrated.

I'm also thinking about the wider context you're working in. You're also in Gabby's World, Gabby [Smith] is in your band; same with Felix from Told Slant. How does that community ground you, especially because the new album is a lot about loneliness?

There was and still is a vibrant musical community and community of collaborators in New York City, and a few years ago, in 2014 and 2015, I think there was a peak in the ability of all of those people to find each other and find some kind of positive, creative atmosphere between each other. But I think there was a lot of splintering off of the DIY scene over the last few years that created a feeling of that community having sort of failed, or not been able to continue its originally extremely beautiful creativity. I think that money becoming a part of the equation played a role in that, that a lot of bands in the scene started to get signed to bigger labels, and what had been a free collaborative environment became competitive at a certain point. A change that I picked up that played a role in how I framed the lyrics of the album that a few years ago there felt like there was a lot more artistic camaraderie that became more difficult as careerism became a part of the equation. I started to feel more and more alienated from the music scene at large as it got away from its original purpose, which was to create beautiful things together.

It's also tough, because rent is always going up, and the ability to make music and make a living off of it is always a struggle. So it seems like some of this splintering is also just a natural response to the reality that this world is not compassionate to anyone trying to make art.

I think it's telling that a lot of the strongest collectives and collaborative communities that formed in DIY start around college-aged kids who are still at varying levels of being supported by their parents, or are still connected to some kind of childhood ability to be supported, and that when you get into adult life and you're supporting yourself, suddenly what had been financially easy becomes this thing that's everybody fighting over peanuts, which is sometimes how the New York scene feels. It feels totally, inextricably tied to the city itself, that this is a place where it's hard to make ends meet as an artist, and it changes the way people approach things, and subtly, over time, it makes people resent each other. When money becomes part of the equation, it becomes hard for people's motivations in making the art untied to what they perceive to be their bottom line.

What would be your dream world as far as getting to be just a musician? Does it mean having to retreat from a space like New York because it's so impossible there?

Places like New York operate under a false pretense of scarcity, that somehow everybody needs to be watching out for themselves at all times because it's so hard to live here. I think that artistic communities can still exist in places like New York if the wealth is spread, if there's more of a system in place for taking care of artists, and artists having each other's backs, instead of hoarding opportunities and money.

I feel like I've always been interested in the idea of musicians unionizing and confused by the talk about anti-capitalism in music circles, and then the emphasis that's still in place for megastars being created while others can't make basic ends meet. New York is kind of a case in point: Why are we treating it like artists can't make a living, when we're still active in supporting institutions like Spotify and all of these companies whose ethos seems to be about artists only being able to make the bare minimum for their art? I think if more emphasis is put on people just looking out for one another, and not going into community situations with so much fear and distrust, a lot could change. The material reality still exists that the rent is too damn high, and it's hard to make a living here, but I find that it's still possible to make a living as an artist if you have people helping you, and that should just be more of that spirit of help spread around.