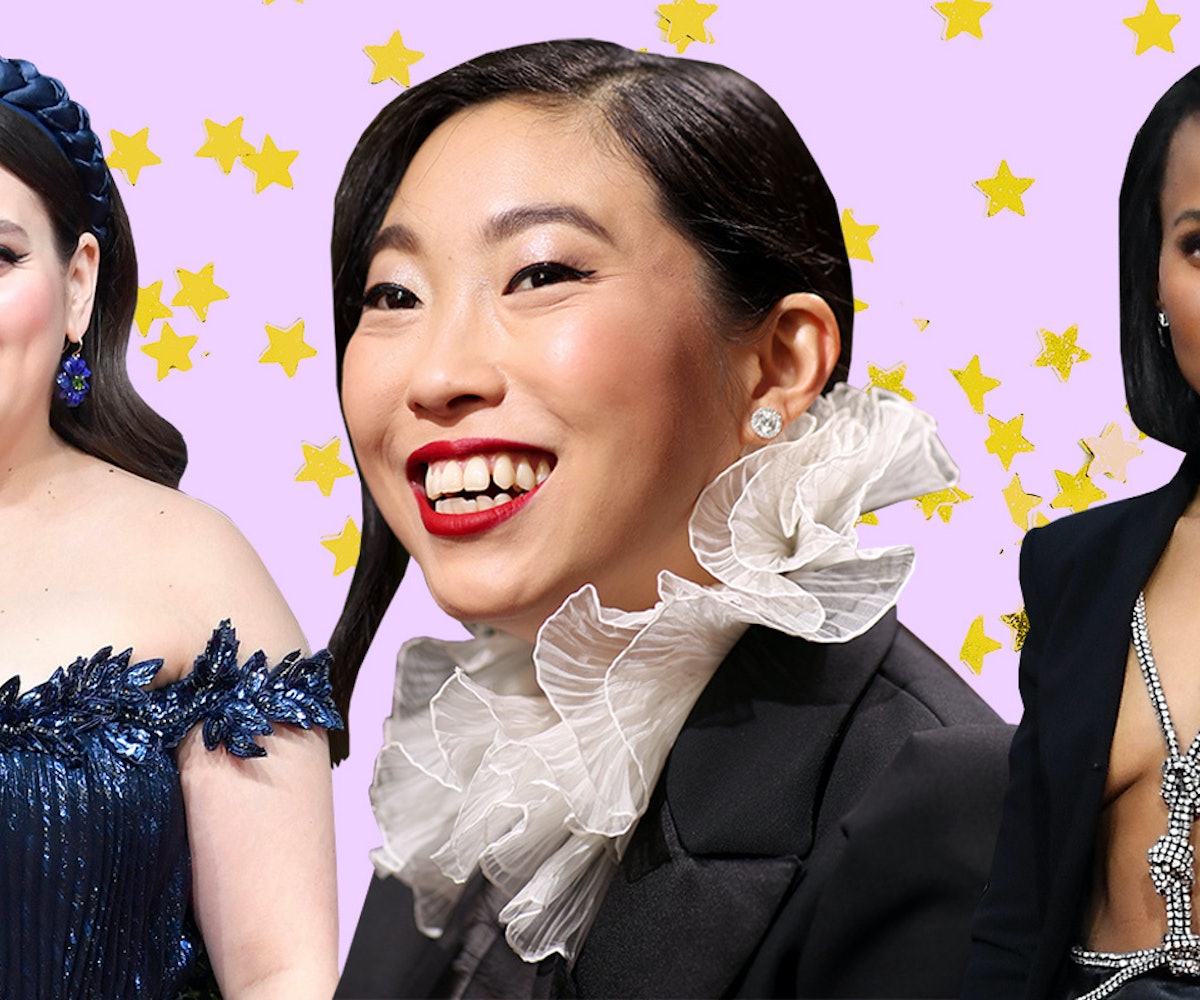 That's a wrap on the first awards show of the season, folks! But before we close this chapter for good, let's take a moment to commemorate the best-dressed celebrities at the 2020 Golden Globes from Sunday night, as chosen by each member of the NYLON team.

Like we mentioned before, the 2020 Golden Globes nominees were stacked with a very stylish crew of famous names, and as a result, the red carpet had plenty of great fashion moments, from Beanie Feldstein's all-navy Oscar de la Renta ensemble to Kerry Washington's Altuzarra blazer-and-skirt combination. There was also Saorsie Ronan in a sparkly slip dress by Celine that's giving us a hint of early-aughts vibes, as well as Zoë Kravitz in polka dots by Saint Laurent. Big sleeves appeared to be the trend of the evening, too, with everyone from Zoey Deutch (in a custom Fendi jumpsuit) to Dakota Fanning (wearing Dior Haute Couture) getting in on the popular style.

Other style statements worth mentioning include Akwafina's ruffled collar (also Dior Haute Couture), which managed to get some stage time as The Farewell star received her first-ever Golden Globes award. Plus, Phoebe Waller-Bridge was also a big winner throughout the evening, taking home two awards for her hit series Fleabag — though she deserves an extra accolade for forgoing a stylist and opting to dress herself in a Ralph & Russo tweed suit.

Read on to learn more about our best-dressed picks from the 2020 Golden Globes red carpet, below, and find out who won every award here.

"This draped, sequined gown might not technically qualify as 'minimalist' on account of all the sparkle, but I always appreciate when a red carpet look doesn't feel forced. The slip silhouette is not only easy breezy — it also gives off plenty of party-ready (going out top?) vibes. Could Paris Hilton's 21st birthday dress from 2002 have appeared on Hedi Slimane's design inspiration board?"

"Big sleeves were one of the biggest trends of the night, and in my opinion, no one did it better than Zoey Deutch. There is a lot at play in this one look — It's a jumpsuit! It's yellow! Those jewels!!!!! — but Deutch managed the unthinkable by making it all look both impossibly glamorous and cool at the same time."

"Leave it to Awkwafina — who played the protagonist in my favorite movie of 2019, The Farewell, for which she was nominated (and won for!) at the Golden Globes — to also wear my favorite outfit of the night. The actress made her Golden Globes red carpet debut in a Victorian-inspired tuxedo by Dior featuring a blouse with a ruffled collar that I want to wear every day from now on. It's the witchy-glam look that every red carpet needs."

"I have no words. I will be spending all week recovering from this look."

"How do you stand out on a red carpet filled with famous, beautiful people? Wear a walking work of art, like this Iris Van Herpen gown on Joey King of Netflix's The Kissing Booth 2."

"What is the best way to show up to your first Golden Globes? In a custom Thom Browne gown that took 11 people and 800 hours (!!) to complete — and that's exactly what Cynthia Erivo did. Her cool, icy silver dyed hair was just a bonus."

"I've been eyeing the polka-dot trend for a while since it's been bubbling up on the runways over the past few seasons, but leave it to Zoe Kravitz to solidify this classic pattern's comeback into something cool and modern with a mixed-up take on the spotty motif."

"In Chinese culture, the color red is one that symbolizes luck and good fortune. So it's quite fitting that Zhao Shuzhen, or Nai Nai from Lulu Wang's touching The Farewell, graced the Golden Globes red carpet elegantly and absolutely swathed in it, proving to everyone around her — and all of us at home — that all we can hope for is to age as gracefully and beautifully as she does."

"Dakota Fanning looked like a pastel fairytale come to life in Dior Couture — the gown is both elegant and whimsical, and the most delicate shade of lavender. It's basically the dress a younger me would have dreamed up in hopes of being swept away to a ball, or older me, to present an award alongside Ansel Elgort. Appropriate for either occasion!"

"Beanie Feldstein makes me want to only wear navy gowns for the rest of my life."

"I love a tweed suit, no-shirt situation. Phoebe Waller-Bridge apparently does, too, as she opted for a very fancy one by Ralph & Russo for the Golden Globes, even eschewing the typical Hollywood stylist to make the pick. Power move for a power suit."