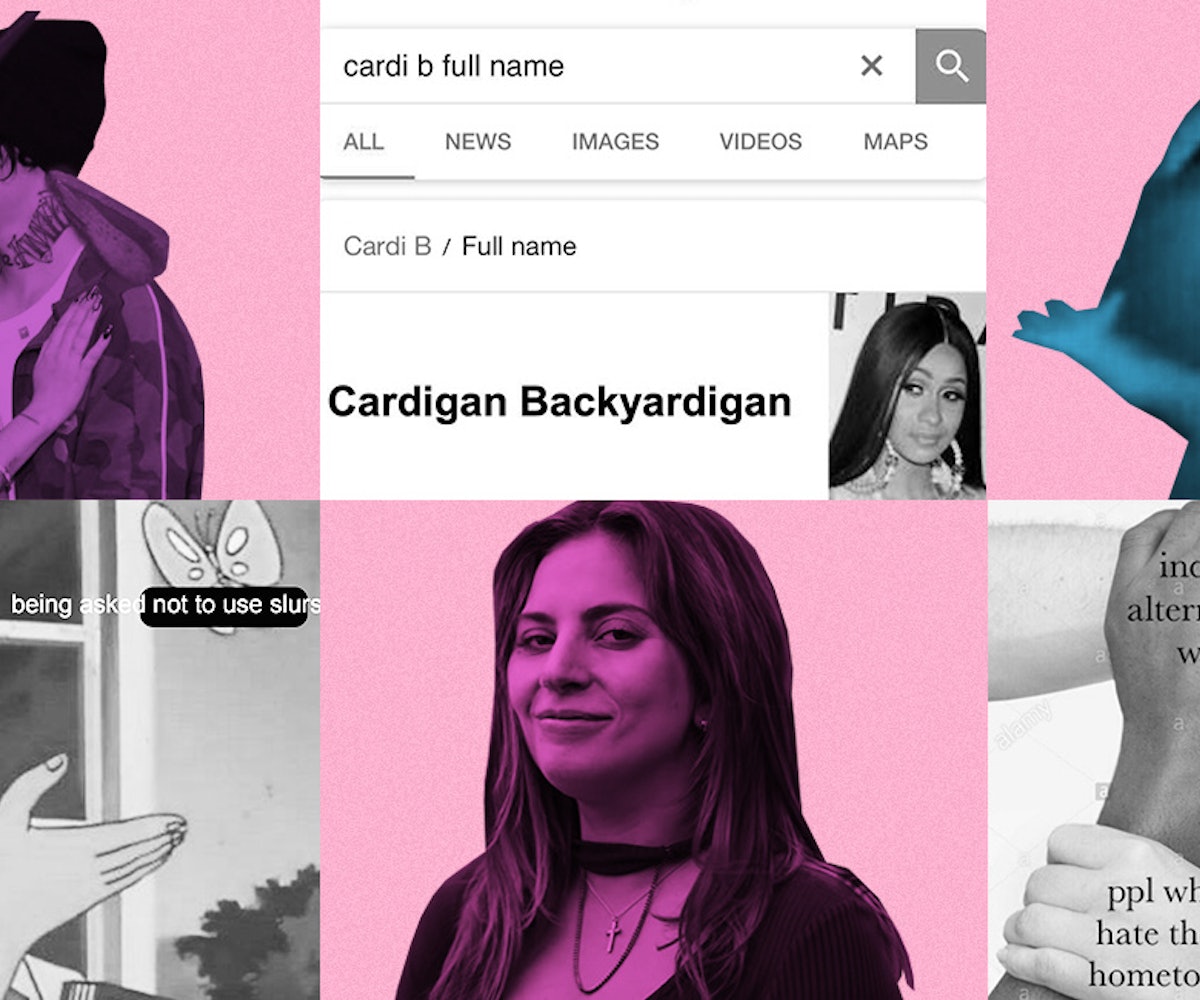 2018 is winding down, and we'd just like to say congrats! You made it! Can you believe that this is the same year Black Panther came out and the Yodel Boy happened? Neither can we! It's truly been a wild ride, but we're finally at the end, and it's prime time to reflect.

One of the things that helped keep us sane through these months has been memes. The inexplicable viral moments have made the days go by faster by distracting us from the other bad stuff happening offline. We've already gathered some of our favorites from the first half of the year, but the internet has produced so, so many more since then.

Ahead, we've gathered the best, funniest, and most relatable ones. You could say we got by with a little help from the internet this year.

It started with Pete Davidson and the size of his, well, dick and escalated very quickly from there. Here's an explainer on what, exactly, BDE is, but it mostly has to do with exuding the kind of confidence that comes with having a huge penis (literal or metaphorical). A debate followed regarding which celebrities embody it and, given how far Davidson's fallen, the No. 1 spot is definitely up for contention. Our vote's for Rihanna.

Mason Ramsey—aka Walmart Yodel Boy—was an easy target for meme-ing, but his talents also got him a pretty bop-able remix and a guest appearance at Coachella. Proof that memes are good for something other than distracting us from the current state of our country.

One very important bit of information we learned this year: Posing for a picture in a garden does not mean you know how to garden. Just ask Melania! Or don't? She probably still thinks holding a pair of shears makes you a plant expert. Anyway, the picture was taken last year but resurfaced on Twitter this summer where people pointed out her very clean sneakers, $1,380 Balmain shirt, and general awkwardness.

I had no idea who Bibble was until I started writing this story. Which just goes to show that memes are so powerful, you don't even need to know their origins to relate. For context: He's a character from the 2006 animated film Barbie: Mermadia who, apparently, likes to sing. He's since become a funnel for people to reminisce on the songs they used to belt out when they were young and dramatic.

To All The Boys…

Nothing like a popular, charming rom-com to make you think about all of the boys you had your own complicated relations with.

Have you ever wondered what 50 Cent is short for? Or, maybe Machine Gun Kelly? Well, if you were on the internet this summer, you probably confused yourself for a bit. For whatever reason (the internet never needs a reason), people Photoshopped fake Google results for celebrities "real" names. Like, Icelandic Cubicle (Ice Cube), Ludacrisscrossapplesauce (Ludacris), and our personal favorite, Cardigan Backyardigan (Cardi B).

When Cardi B announced on Instagram that she and Offset were splitting up, he commented under her post "y'all won," apparently referring to the internet who, we guess, is to blame for their breakup. It's a sad situation, but the same internet who is apparently to blame refused to show any remorse toward Offset (especially considering he allegedly cheated on Cardi multiple times). And so "y'all won" was quickly turned into a chance for people to play the victim during situations where they know they're wrong.

A Star Is Born

A lot (and we mean a lot) of memes came from A Star Is Born, but the best, in our opinion, is the one that takes the corny "I just wanted to take another look at you" and turns it into internet fodder.

We were confused about the moth meme when it first popped up in September, and we still are. It centers around a moth's love of lamps and was eventually combined with other pre-existing memes like "Distracted Boyfriend" or Lil Xan and Miley Cyrus' VMA PDA.

Uniting us all in our inept social cues, this meme touches on times when people have put their foot in their mouth during conversation. At least we can all take comfort in the fact that we often say things we know we shouldn't, including Kacey Musgraves.

People like to show off on the internet a lot and sometimes about not so great things. Here, a chance to call those people and their self-involvement out with four simple words.

Someone unearthed a shot from of SpongeBob, leaning against a wall and panting, and it became a playground for anyone who has ever done anything that required even a modicum of effort. Our favorite cross-meme love-pairing is that of tired SpongeBob and the viral squinting woman image. A match made in meme heaven.

Ariana Grande's hit song "Thank U, Next," in which she calls out which of her exes taught her love, patience, and pain, got the entirety of the internet doing the same with their own past (often fictional) loves.

Not much agreeing goes on on the internet, but at least sometimes people from different subcultures can come together to bond about one common interest, as this meme displays. If anything, we can agree that the meme itself is pretty gold.

This meme apparently originated from an anime cartoon where the man pictured thinks the butterfly is a pigeon (he must be friends with Kylie). Still keeping that same confused energy, he's now become a person that's baffled by basically everything.