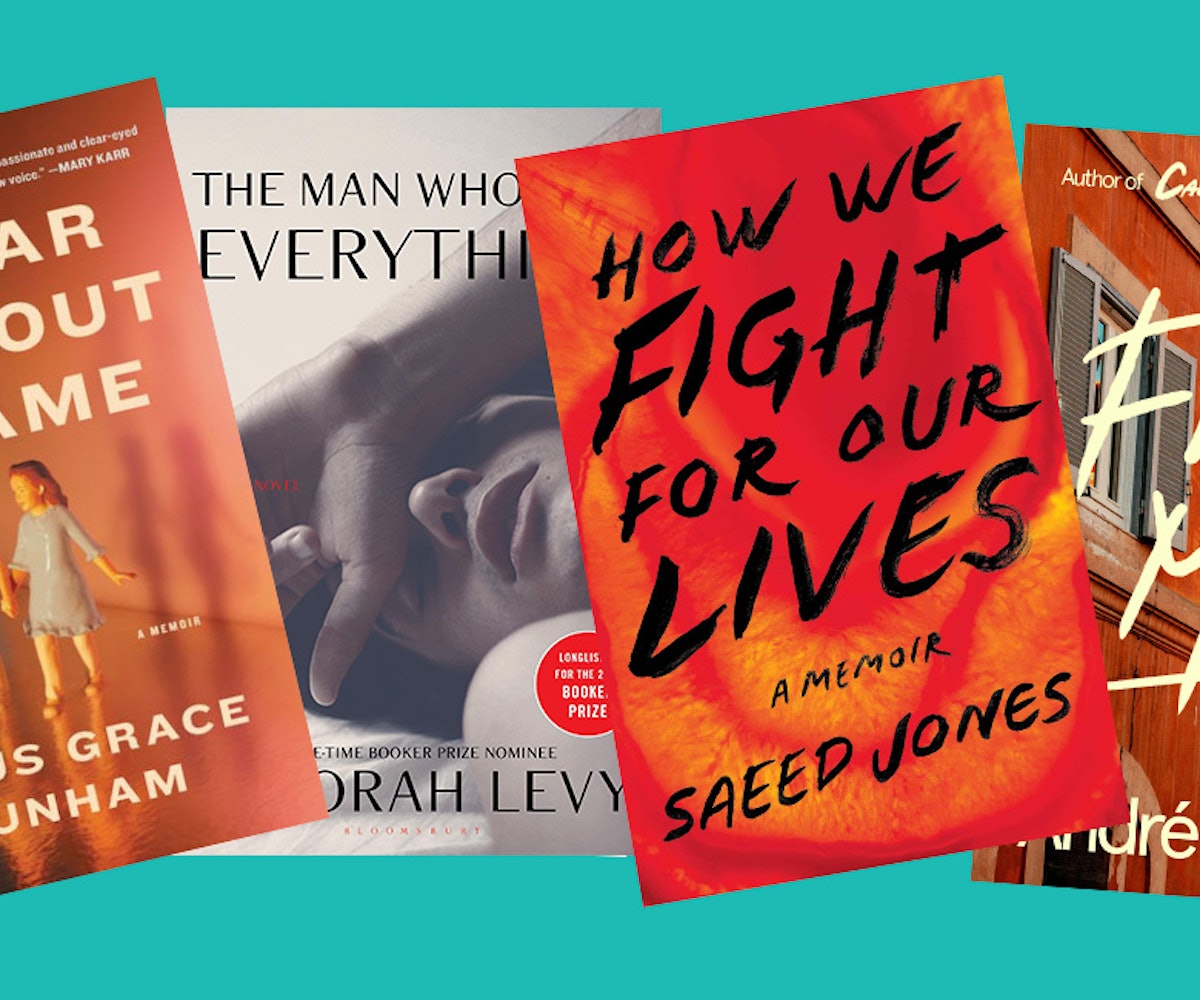 From a memoir that's a sensitive, profound exploration of a transitioning identity to an essay/story collection that's the most subversive possible love letter to New York City circa now, this month's new releases offer something for everyone, no matter where they are in their lives.

Reading this slender novel, full of glistering language, shards of which stick in you, like weirdly welcome slivers of glass, feels like reading an email from that one brilliant friend of yours, the one who disappears and reappears and weaves stories for you that are both instantly recognizable and then also have you wondering if you're really living at all. This is just to say, Exquisite Mariposais singularly enchanting, offering insight into what it means to be young and an artist, what it means to have style (a rare quality, indeed). What's not to love?

Ben Lerner's latest foray into autofiction follows Adam Gordon into his senior year of high school; it's 1997, and Adam is a nationally acclaimed debater, a popular and privileged kid, with lots of friends and a good relationship with his parents, both prominent psychologists. However, as Lerner switches perspectives between Adam and each of his parents, it becomes clear that not everything is actually that simple, and things are only more complicated with the introduction of Darren, a high school student with anger issues, into the fold. Lerner's interrogation of what it means to be a young white man, and the pervasiveness of toxic masculinity in a culture that also offers ready access to weapons, is an unsettling, insightful, and riveting book, one that feels both current and prescient, and undeniably vital.

Thought-provoking, unmooring, and haunting, Jeannie Vanasco's memoir is a clear-eyed, moving account of what happened when Vanasco decided—after years of waking up from nightmares about the boy who raped her in high school—to confront her past rapist and see what will happen if they talk. Mark—the boy, now a man—agrees to meet, and what follows is an interrogation into what it means both to be raped and to rape someone, how this act marks both the victim and the aggressor, and how powerful it can be for someone who has been raped to reclaim their narrative, and write their own story.

How We Fight for Our Lives: A Memoir by Saeed Jones (available October 8)

"People don't just happen," writes Saeed Jones in his powerful memoir, that tells the story of what it was like to grow up as a gay, Black man in the South. Jones is a poet—read Prelude to Bruise, if you haven't—and his sense of verse is present in his prose, which is lyrical and visceral as he recounts navigating difficult relationships with his family and clandestine meetings with lovers. It's an intimate and specific book, and one that feels very much needed within the coming-of-age genre.

As with her last book, the 2017 novel A Loving Faithful Animal, Josephine Rowe demonstrates in her new story collection an uncanny ability to find moments both devastating and sublime in even the most mundane aspects of life, like a millennial Alice Munro. Each of the book's 10 stories is singularly transfixing; reading them is like walking down a street at night, moving from one lighted window to the next, bearing witness to the lives within, feeling more profoundly the darkness around you when the story ends, when you can't see inside any longer. But while you can see inside, Rowe offers exquisite, many-faceted glimpses into the lives of people drifting and settled—often both at the same time—all reflecting the unnerving awareness that life's transience might be the only permanent thing there is.

It is always an event when Zadie Smith publishes new work, and especially in this case, with the publication of this, her first book of short stories. Grand Union comprises 19 stories; 11 previously unpublished, and eight that have appeared before in The New Yorker—all provocative, incisive, and revealing Smith's prodigious talent, which she refuses to limit to any singular genre or subject, instead choosing to range from dystopia to realism, offering sly commentary on the lives we live today, and what might be in store for our futures.

There's now, officially, only one person who I want to read on New York and fashion and media and, well, image, and that's Natasha Stagg, because after devouring her new book, Sleeveless, a blend of essays and story snippets—or, as Stagg calls it in her introduction, "a personal account of a very strange time... an attempt to identify the invisible strings pulling us in directions we never thought possible"—I'm under the spell of her unsentimental, though not insensitive, piercing way of looking at everything around her. Stagg isn't afraid to interrogate those things, those movements, that are embraced thoughtlessly, and she is not ruthless exactly, but fearless about questioning what will happen once we dismantle our existing structures, wondering what will be left if we throw it all away.

Your House Will Pay by Steph Cha (available October 15)

In 1991 in Los Angeles, 15-year-old Latasha Harlins was murdered by Soon Ja Du, a convenience store owner, who accused Harlins of trying to shoplift a bottle of orange juice. Du shot Harlins in the back of the head, killing her instantly; Harlins held the change for the juice in her hand. Du was found guilty, but, against the jury's recommendation, the judge declined to sentence her to any prison time. Harlins' murder happened just days after Los Angeles police officers beat Rodney King, and the two brutal incidents contributed to the racial unrest in the city, preceding its 1992 riots, which left dozens dead and thousands injured. Steph Cha's gripping, incendiary novel has a historical basis in this time period, but takes place in 2019, and centers around two people: Shawn Matthews, a Black ex-con whose teenage sister was shot and killed by a Korean grocery store owner who served no jail time, and Grace Park, a young Korean woman whose life is shattered when her mother is shot in a drive-by shooting. Cha deftly brings together these two characters, offering an incisive and searing look at race relations, violence, and the intersection of disparate traumas. It's a riveting, revelatory novel—a must-read.

A Year Without a Name: A Memoir by Cyrus Grace Dunham (available October 15)

When Cyrus Dunham was a child, they felt like a stranger within their own body, and as if they were fooling those people who saw them as a little girl. As Dunham grew up, their sense of dysphoria, or rather "bodily claustrophobia," persisted, culminating in Dunham determining to interrogate their identity in relation to their peers, their family, and their body. Dunham's deeply felt, forthright, lucid accounting of the complex process of determining who they are is astonishing in its intimacy and generosity, and serves as a reminder of how difficult, but how necessary, it is to be honest with ourselves about who we know ourselves to be.

The Man Who Saw Everything by Deborah Levy (available October 15)

There is no way to succinctly summarize this slim book and adequately convey how it manages to hold exquisitely actual multiverses within its pages. But, well: Levy's latest opens up on Saul Adler, as he crosses Abbey Road in 1988, to pose for a photo inspired by the famous Beatles album cover. Adler is hit by a car, though only lightly injured; however, this incident will be relived later in the book, offering a glimpse into the ways in which our lives do and don't matter in the grand scheme of things. It's a brilliant, blistering, bold look at identity, relationships, and time; a perfect puzzle of a novel.

Divide Me by Zero by Lara Vapnyar (available October 15)

Math is a love language of sorts in this brilliant, heartbreaking new novel from Lara Vapnyar, who has created one of my favorite narrators in recent memory with this novel's Katya Geller. From a young age, Katya sees the world through the numerical prism offered by her mathematician mother. This doesn't prevent Katya from being the romantic she innately is, but it does offer her another way to see the world—a sensible, ordered way, one which Katya craves as everything around her falls apart. If I were just to list the dramas that Katya endures—a difficult divorce, a fraught love affair, a terminally ill mother—it would perhaps make this novel seem heavier and darker than the most tragic of Russian novels. But, in fact, Divide Me by Zero is, despite its honesty about the difficulties of a life fully lived, a celebration: a sensitively told, honest account of the messiness and beauty of loving with abandon and living in a manner that defies easy categorization, numerical or otherwise.

All This Could Be Yours by Jami Attenberg (available October 22)

Nobody writes family drama quite like Jami Attenberg, and her latest novel is a dark, deliciously captivating look into the way a toxic patriarch can poison everyone around him. All This Could Be Yours centers around the legacy of Victor Tuchman, a rapacious real estate developer whose family has gathered around him in New Orleans now that he is on his deathbed. As his daughter, Alex, tries to understand who her father was, and what his legacy means for her, and for the rest of the family, it becomes more and more clear the ways in which trauma is generational, and how our secrets bind us to one another, even as they tear us apart. There are no easy resolutions offered here, but that's as it should be: There are many ways to describe familial relations, but "easy" isn't ever going to be one of them.

This stunning debut collection marks the arrival of a brilliant storyteller; Beth Piatote weaves together political, historical, and personal themes to offer new perspectives on the human condition. In her stories, whether by offering her take on Antigone("Antikone") or invoking events like the Battle at Wounded Knee, Piatote, who is Nez Perce, writes with dazzling clarity, emotion, and bone-dry humor about the lives of indigenous people, in what feels like a celebration, an act of love, and one of the most unforgettable story collections of the year.

This follow-up to André Aciman's Call Me by Your Name leaps many years into the future for Elio and Oliver, which allows Aciman to craft a stubbornly unsentimental, but nevertheless beautiful meditation on love, the passing of time, and loss. We're greeted with Elio as an adult, a classical pianist in Europe, who is still searching for love—he has not been able to forget about Oliver, who, though married for years and living in the U.S., still hears the echoes of his long-ago love. Find Me is, at heart, a meditation on how love bends and warps over time, but never quite disappears

The In-Betweens: The Spiritualists, Mediums, and Legends of Camp Etna by Mira Ptacin (available October 29)

Talk about a great start to a book: "They believed they would live forever." That begins Mira Ptacin's accounting of the little-known Camp Etna, a more-than-century old community in Maine which has long played host to women who believe they can commune between this life and whatever follows it. Ptacin does more than just recount the history of Camp Etna (which, yes, still exists), but also delves deep with precision and insight into our ongoing fascination with the spirit world, and the reasons why women, in particular, have long embraced an alternative to the conventional ways society wants us to look at death, and life.