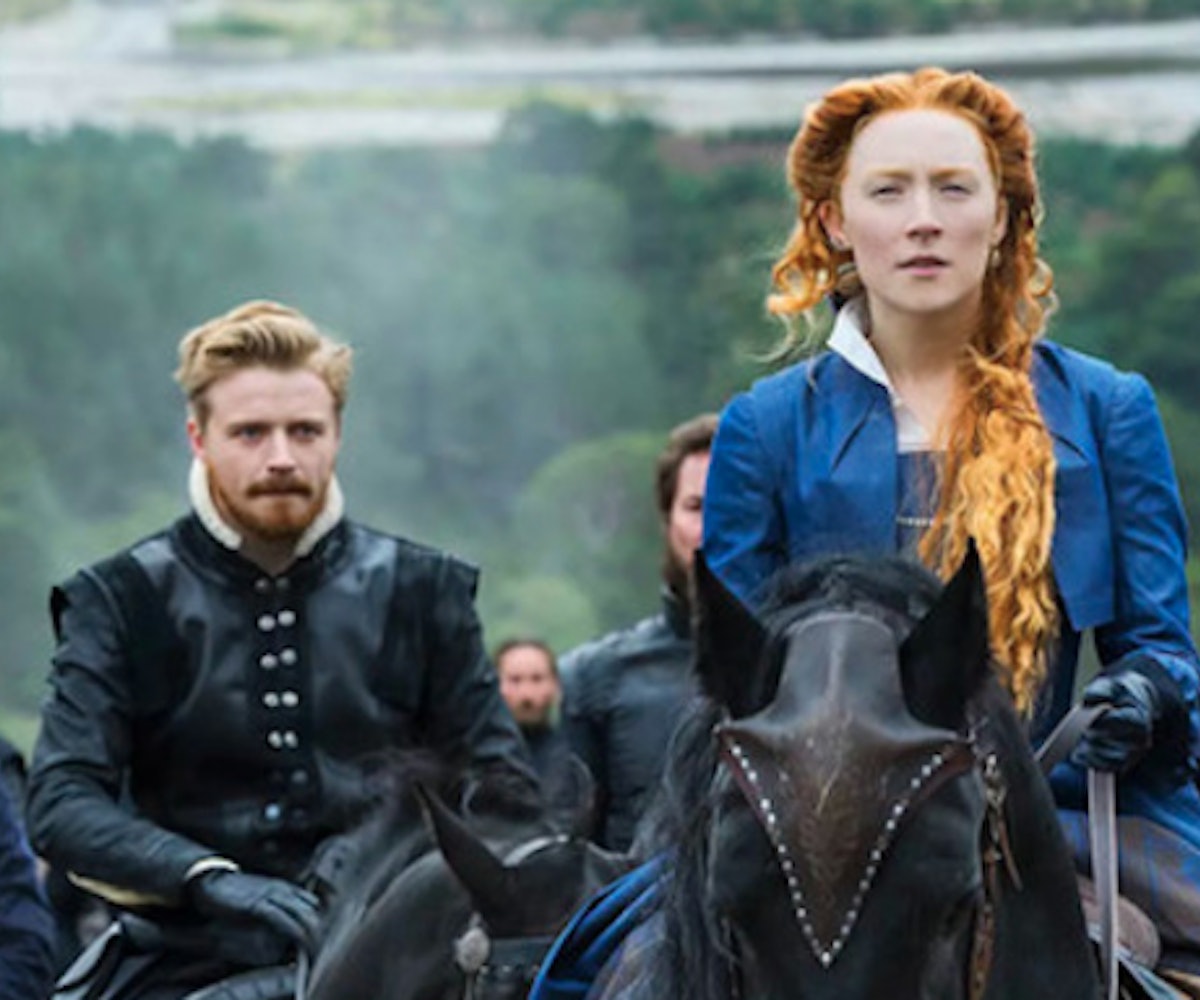 There are doubtlessly dozens of questions running through the mind of anyone who has just watched Yorgos Lanthimos's brilliant new comedy, The Favourite. Many probably have to do with bunnies. Others are perhaps concerned with whether or not Sarah Churchill, the Duchess of Marlborough (Rachel Weisz), actually had a sexual relationship with Queen Anne (Olivia Colman); or if Abigail Masham (Emma Stone) truly usurped her cousin's position in the royal household.

And it isn't just The Favourite that's currently inciting questions about the goings-on of long-dead members of the British aristocracy—the just-released Mary, Queen of Scots similarly must have plenty of theatre-goers wondering whether or not Queen Mary (Saoirse Ronan) was, in fact, incredibly religiously tolerant; or open to the idea of having a gender-fluid courtier, who occasionally slept with her husband; or wore mismatched, suspiciously modern-looking earrings.

Or perhaps your interest in the British royals was stoked by writer Nicole Cliffe's recent Twitter thread on Kitty Kelley's dishy, questionably sourced book The Royals? Cliffe's thread included screenshots from the book, revealing all sorts of things not only about well-known Windsors like Queen Elizabeth II and Prince Charles but also about lesser-known royal-adjacent figures like Louis and Edwina Mountbatten. Or maybe you've been watching Netflix's The Crown?

It's all enough to send even the most mildly curious amongst us down a Wikipedia wormhole into the lives of the British monarchy, and to that I say: Yes! What have you been waiting for? The best thing to do on the entire internet (other than read Sephora product reviews) is read about dead kings and queens and counts and countesses and lords and ladies and just let yourself wallow in the decadence and disorder of the ultra-elite, not just the 1 percent, but rather the .01 percent of their days.

While we currently live in a time filled with many cultural entry points into Wikipedia's treasure trove of monarchy pages, my personal entry into this area of Wikipedia came several years ago when I read, in quick succession, Wolf Halland Bringing Up the Bodies, Hilary Mantel's novels about the court of King Henry VIII, as told through the perspective of Thomas Cromwell, a commoner and lawyer who would eventually serve as Henry's chief minister. Mantel's justly celebrated works of historical fiction were fascinating and filled with the kind of intrigue that it was nearly impossible to believe was real. I mean, I knew, of course, about the king's rapid cycle through wives, but some of the other details—the depravity of Catholic martyr Sir Thomas More, say, or the fact that Anne Boleyn's brother, George, was beheaded for treason right before she was, thanks to the testimony of his wife, Jane—were then unknown to me. But since these books were fiction, I couldn't be as sure about their veracity as I would in a biographical work. So Wikipedia became my constant companion.

What I found, soon enough, was that I wasn't only using Wikipedia to learn about the original people for whom I'd been searching; I would start reading the page for Jane Seymour and, before long, I'd find myself on the pages of Thomas Tallis, a famous Renaissance composer; and Thomas Howard, the 4th Duke of Norfolk; and Lady Jane Grey, the "9 Days' Queen." These rabbit holes stretched out far and wide, across centuries, past fallen dynasties and cresting the rise of new ones, spanning kingdoms and duchies and the entire European continent. I tracked generations of descendants, noting where family trees branched out and then back in on themselves, understanding more clearly than ever before the risks taken when procreating with close family. (That Hapsburg jaw is funny but it's also... no joke.)

Probably not dissimilarly to the way in which it's vicarious fun to read a biography like Kitty Kelley's, it's a true pleasure to read about these once omnipotent figures, almost all of whom led lives plagued by scandals and disgrace and strange diseases, and the vast majority of whom met untimely, violent ends. (Do you know how many thwacks it took to sever Thomas Cromwell's head from his neck? More than one. Much more than one.)

And about those violent ends: There is also something specifically appealing about how unsanitized Wikipedia is—the language is rarely that poetic or lyrical, as it would be in a historical novel, and the lives being read about are not enacted by beautiful women like Saoirse Ronan or Emma Stone. Hollywood likes to make more beautiful these pockmarked, snaggle-toothed, gout-ridden royals, and I get it, I do, but I also lament the fact that this means we end up with a climactic execution scene in Mary, Queen of Scots in which Mary (Ronan) looks exactly the same as she walks to her death at the age of 44 as she did when she arrived in Scotland, at the start of the film, when she was just 18.

Sure, it makes for a more strikingly composed final few moments on film, but it in no way has the kind of dramatic tension that happened in real life, when, per Wikipedia, "The first blow missed her neck and struck the back of her head. The second blow severed the neck, except for a small bit of sinew, which the executioner cut through using the axe. Afterwards, he held her head aloft and declared, 'God save the Queen.' At that moment, the auburn tresses in his hand turned out to be a wig and the head fell to the ground, revealing that Mary had very short, grey hair." Drama!

More than just being invested in the gory details of these dead monarchs' lives, the appeal of these specific Wikipedia entries resonates with particular strength right now, when our capitalist society's inequalities have created a system in which our status at birth feels as impossibly entrenched as it did some few centuries ago. American political dynasties have a lot in common with the royal families of old; fathers and sons are presidents a scant eight years apart; daughters and son-in-laws serve as senior presidential advisors. The wealthy stay wealthy through the work of the poor; empires continue to be built around the world; gated communities have taken the place of moat-rimmed castles.

This, then, is why it's so appealing to read about these rulers—it's a reminder that our current rulers are not inherently special. There is not now, nor was there ever, a divine mandate to rule. These men and women served through twists of fate—many of them perversely cruel—and there is no more reason now to respect the whims of a monster, merely because he's president, than there was to do so hundreds of years ago, simply because someone was a king. Reading these entries offers a clearer understanding of society's most elite members than most people were ever allowed to have before, offering a democratizing experience, an ability to rid yourself of any notion that people are intrinsically special because of some random combination of DNA.

And, at the very least, reading these means you'll be able to discuss at length the fact that Prince Philip's sisters were all married to Nazis—there's no more charming kind of dinner conversation. Really!