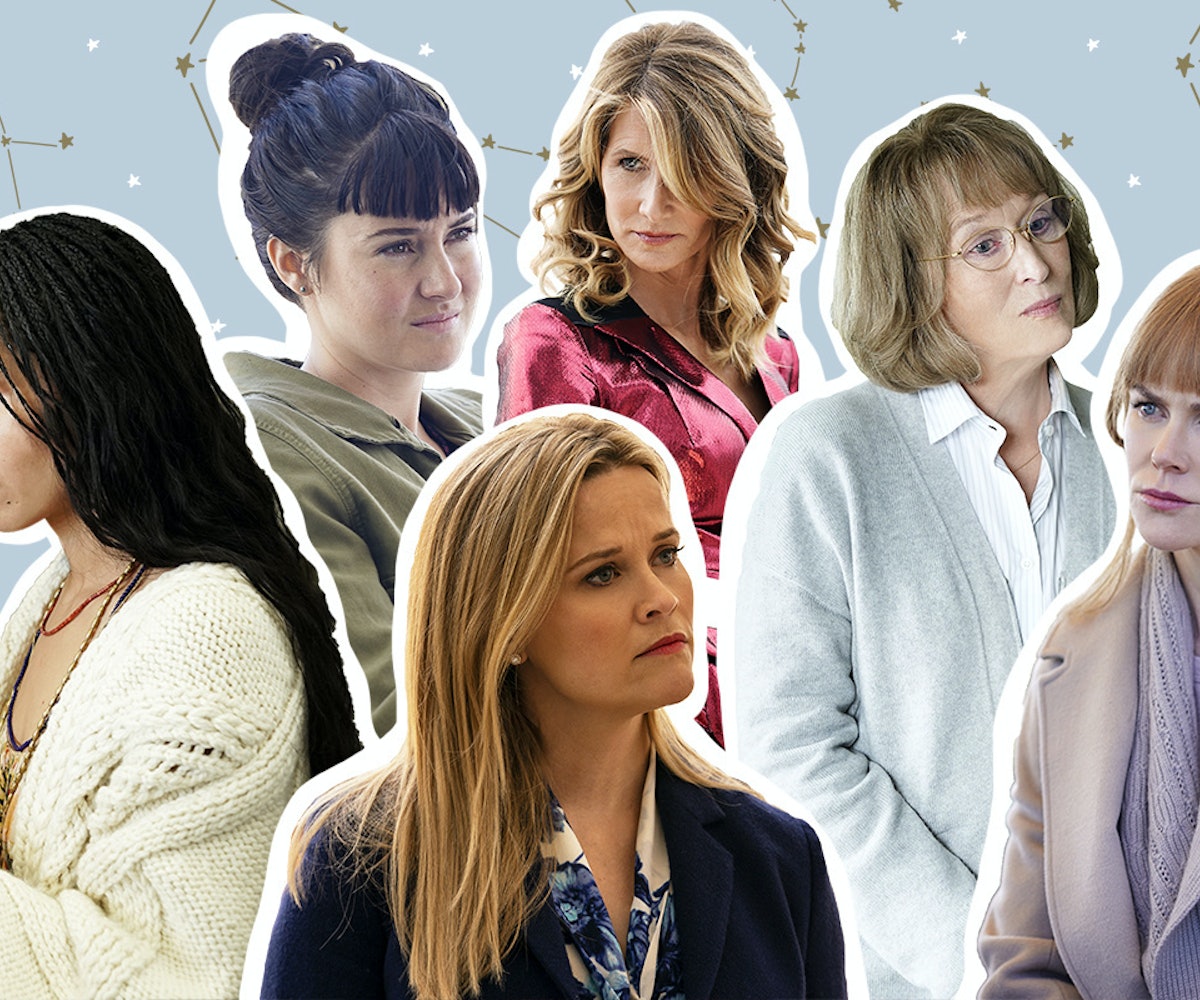 Have you been watching Big Little Lies? If you haven't, then maybe you're one of those healthy people who doesn't consume TV like it's your job. Good for you, but also you are a fool, because this melodramatic show full of white women driving cars while listening to moody music is a jewel on the landscape of visual media.

Their relationship to their cars, their tensions, and their chaotic behavior that serves to catalyze each other's downfalls are just some of the reasons why I've decided that every member of the Monterey Five except for Bonnie is a cardinal sign. Why except for Bonnie? Read on to find out.

As for the men: No one cares about the men. Or, perhaps you care about one man. That man is probably a Cancer with the way he deals with Madeline's shit with equal parts emotional support and passive guilt trips. (He still wasn't really worth writing about, though.)

Listen, here's the thing: Reese Witherspoon is an Aries, and almost every character she plays is an Aries. Tracy Flick (Election)? Aries. Elle Woods (Legally Blonde)? Aries. Why should her character in Big Little Lies be any different? As one piece of evidence among many, I offer Madeline's complete inability to apologize to Ed for her unfaithfulness. The best she can do is: "I can't promise I won't fuck up again, but I won't fuck up the same way!" Yeah, okay. Plus, let us not forget Madeline's Aries temper. They might have cut that scene of her chucking an ice cream cone at Mary Louise, but it lives on in our memes.

I'll start with the one I found hardest. If my cardinal sign premise is correct then, surely, Jane is a Cancer. Jane, the emotional warrior. Jane, the caregiver—not only to her son, Ziggy, but also to all the women to whom she is tied. She checks in on Bonnie in a way that shows no signs of ulterior egoistic motives (in contrast to Madeline, for instance). She is the one who bangs down Mary Louise's door and demands she answer for the wreck she is making of Celeste's life. She's the one who, when pushed, will admit that she wishes she could have killed Perry if she'd only had the chance. She's the one who danced in front of the ocean with her headphones on in a private world where joy is protected and possible.

Renata is a hustler, a purveyor of good taste, and a control freak. Her story revolves around the material world, around an identity built on top of what one owns and achieves as proof of who they are. Well, what else would she be but a Capricorn? I know what you're thinking, what about the drama and the hysterics? What about all those scenes where Renata berated the school teachers? Isn't that a Leo move? No. Leos live to be liked, even when they're playing the role of mama bear, they're pouring out honey, not vinegar. But, let me tell you what, if you haven't seen a Capricorn mom in a rage over her child, BLL offers only a taste, though a delicious one, of the righteousness a Capricorn brings.

A Libra is a Hellenistic statue come to life and ready to shatter. So is Celeste. She's both fierce and fragile. A cardinal sign associated with information, she moves quietly from woman to woman, collecting secrets and alliances. She's the only one who's in therapy because her mind is a powerful tool. An air sign, she changes the air in any room by bringing it to a standstill. A standstill, that is, until she brings the gavel of justice down. Imagine her, pummeled by the slutphobia of the justice system, standing up and demanding to interrogate Mary Louise herself because this is her fight. It's a Libra power move if there ever was one.

Why is everyone cardinal except for Bonnie? Listen, Bonnie doesn't belong in this white disaster world, and no one really knows why she's stuck around so long. Surely there's a yoga class she can teach somewhere else? Surely there's another show where the writers don't feel the need to give her a magical Black mother? But no, Bonnie wants to stick around in some toxic environment, crying because she's triggered. That's some Pisces shit.

I wouldn't want to ignore Mary Louise, and, honestly, she probably wouldn't let me if I tried. That's because Mary Louise is a Scorpio. A playing-the-long-game emotional detective. A manipulative cross-dangler. An all-seeing sneaky sneak who has been having Celeste followed for months. A suffocating moralist who probably fucked her son all the way up. Not that we have to blame the mother. It's true that there are male demons everywhere who can only blame themselves. But, watch one episode with Mary Louise in it, and you know it was her.