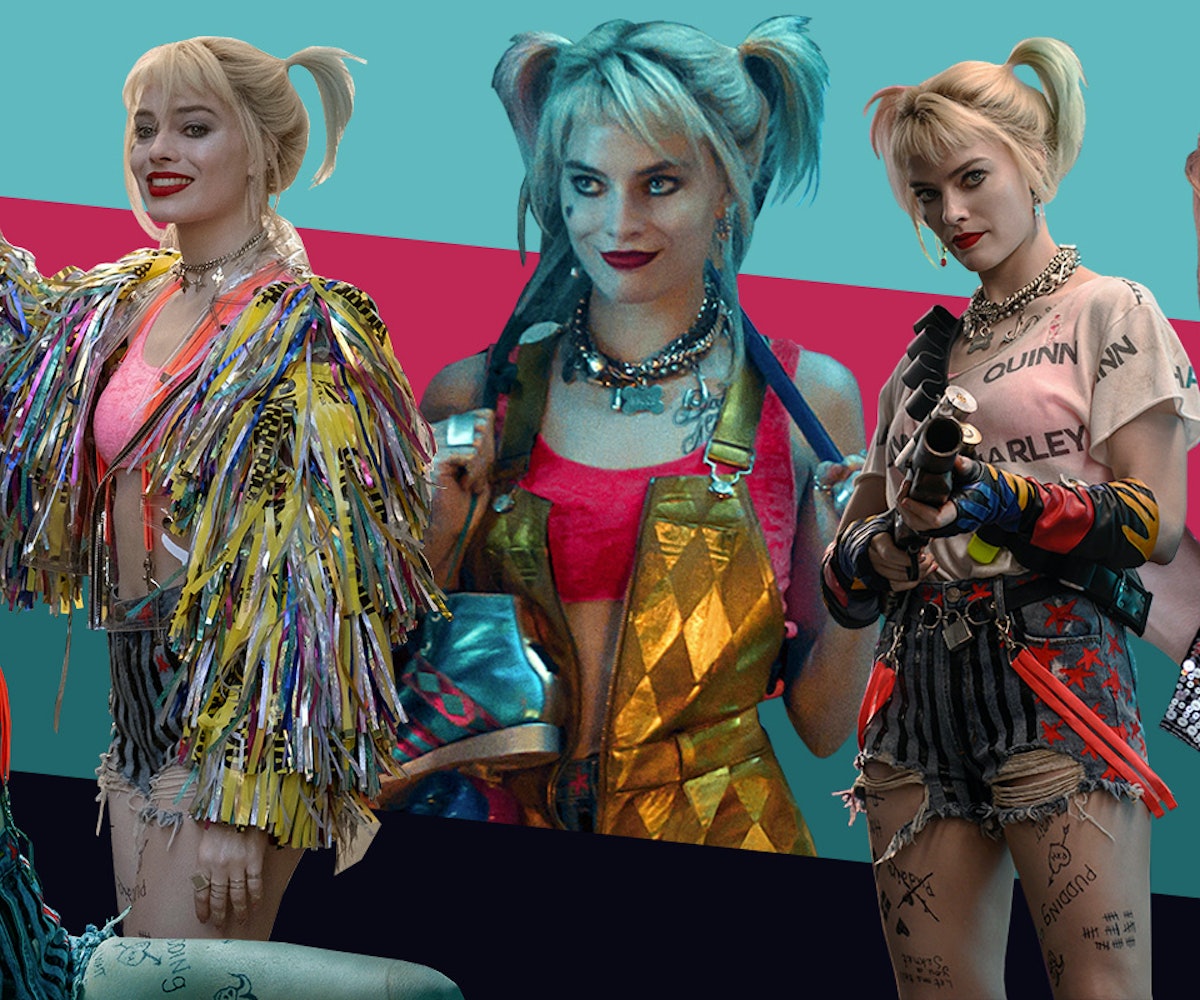 Before you even have a chance to immerse yourself in the (much-anticipated) world of one (emancipated) Harley Quinn in Birds of Prey, you will be dazzled into another — one full of stylish clothing, kaleidoscopic colors, and more jewelry and shine than all of the DC Universe films combined. For Harley Quinn's Birds of Prey costumes, designer Erin Benach reimagined the anti-superhero's two main comic book looks — trading her red-and-black color palette for a hot pink-and-blue one, and her signature harlequin-like jumpsuit for gold leather overalls with a diamond pattern.

"We tested tons of different ideas and colors and fabrics for that outfit. I wanted it to feel a bit utilitarian, but also sexy," she says of the latter. "We had tried red, we had tried black, we had tried all these different ideas. At the end of the day, the gold leather, aesthetically, looked better with the lighting in the funhouse, and the exterior night scenes, where it just glowed almost. It also kept in tone with the rest of her world."

As the costume designer behind indie favorites like Blue Valentine, Drive (yes, she designed Ryan Gosling's character's now-iconic scorpion jacket), The Place Beyond the Pines, and Neon Demon, Benach knows all about moody worlds that come alive sartorially at nighttime. And while the Birds of Prey costumes are undoubtedly reflective of Gotham's dark, violent underbelly, they're also unabashedly celebratory, with sequin pieces and star iconography dominating the early scenes featuring a newly single-from-the-Joker Harley Quinn (played by Margot Robbie) partying in the club.

"From the outset, we knew we wanted to have fun with the world and the characters that we were creating," she says. "We knew that Harley has broken up with the Joker — she's emancipated, she's on her own. She's doing that thing you do when you have your newly found freedom from a relationship that's toxic."

This continues as Harley Quinn gets soon caught in a chase, which she conducts in a jacket made of caution tape tassels. "I had seen a sweater-jacket that had these yarn, fringe sleeves, and I loved the movement in it... I was like, 'I wonder how I can take this idea and translate it to a Harley Quinn World?'" says Benach, adding:

And everything we created for her had this DIY aspect, like she could make these things herself. The idea being that she went to a party store, and she got these streamers and the caution tape. And it was just this motif that I gravitated toward about her, like "step off, don't fuck with me" kind of attitude, and also that she has this anarchy to her, where she would like to deface some sort of government property. So the idea was that a scene of a crime would have caution tape, and she would take it down and then use it to make something herself. There's something very Harley about that.

This rebel aesthetic extended to Harley Quinn's jewelry, all of which Benach designed from scratch — which, following filming, led to her starting her own line of jewelry, Billie Valentine, now carried at Nordstrom. Featuring stacks of rings, ear parties, and layers of necklaces, the jewelry is also packed with meanings. Most notably: a chunky necklace featuring a selection of charms, ranging from a "Bruce" dog tag (for Harley Quinn's pet hyena) to a pill (a wink at Harley Quinn's backstory as an asylum psychologist).

"There's also female iconography and tools that maybe she would use to unlock doors or MacGyver her way through whatever she needed to do. And then just mixing the hard elements with the soft things, like pearls. Just that idea of mixing soft and hard for that complexity of character, which I think Harley really does embody," says Benach. "I just loved the idea of jewelry layering a character, and to me, it just always brings it to that next level. Taking cues from her previous history, Harley has a punk rock aesthetic to her. So we took that and went a little bit glam and a little bit further."

Nowhere is that more apparent than in the last scene where Harley Quinn is wearing a can't-miss sequined blazer — custom made by Discount Universe for Benach — that, similar to the jewelry, features symbols like baseball bats, flames, and chains among other, erm, things: "There's a vagina on the back of her jacket — there are several sort-of female empowerment symbols that I love using [throughout the film]."

One moment that veers away from the punk aesthetic entirely is when Harley Quinn, for reasons we won't spoil here, channels Marilyn Monroe in Gentlemen Prefer Blondes in a jumpsuit version of the film's iconic pink gown. "To make a Harley Quinn version of Marilyn's look in that scene, I played with so many different ideas — like, 'I'll take the silhouette, but I'll change it to Harley colors' — I had all these sort-of super out-there creative ideas. And then in doing my research, in the middle of it, I stopped myself and was like, 'You know what would be actually way cooler? If we pay more of a nod and homage to Marilyn, and we take that idea, and we just put it in pants,'" Benach says. "So many of our looks in this movie are pants, and just the idea of spinning it on its head that way, and revisiting that concept but doing it so on the nose exact, with just that little twist, [was exciting]."

In another performance scene, we see Black Canary (Jurnee Smollett-Bell) singing in the club in a fishnet dress. This time, the jewelry is made up of a collar-like necklace and chunky bangle. "I felt like she wore jewelry as armor," she says. "I remember I was watching some FKA twigs videos, and she has an amazing jewelry ensemble... I was kind of inspired by that, I felt like it completed the character."

Soon, though, Black Canary undergoes a wardrobe change as she is promoted from singing in Roman Sionis' (Ewan McGregor) club to driving him, which she does while wearing suits paired with crop tops and bras, along with '00s-esque body chains and arm cuffs. "I try to tell a little story arc with the clothing, I love the idea that she goes into a sort of boss look in the suit. And she owns it," she says. "There's something about it being super put-together with a strong shoulder, a great silhouette. I feel like the strongest version of myself sometimes when I put on a suit, and I love the idea of one of our superhero females wearing a suit to finish off the bad guy."

The film's costumes are not without humor though. In a comic relief moment, at one point, we see detective Renee Montoya (Rosie Perez) wearing a "I Shaved My Balls For This?" T-shirt, fished out of the lost-and-found bin at the police station after she gets trash dumped on her. "I can't actually remember how that particular phrase came up, but I think I had sent 10 ideas that we could try," Benach says. "This one was just the most irreverent and the most raunchy and the most embarrassing. And that was kind of what we were going for." Another humorous moment comes in the form of pickpocket Cassandra Cain's (played by 13-year-old Ella Jay Basco) jacket featuring a middle finger patch.

But maybe the most entertaining is the wardrobe of the film's villain, Roman Sionis, made up almost entirely of suits — all impeccably paired with printed shirts, pocket squares, and gloves — while at the club, and silk robes at home. "The idea was that Roman owned and ran the nightclub and could have anything in the world he wanted," she says. "There is a scene where, for the silk pajamas, we created a textile of Roman's face on it to reflect his very egocentric kind of personality. Everything sort of reflects that, like the rubber gloves with his initials. Everything for him would have to be custom and unique. We tried to create a wardrobe that felt as custom as possible."

Given that Roman spends most of the movie indoors or in the dark, in lieu of color, Benach opted for a lot of texture in the form of velvet and embroidered suits that would still pop. "Everything I did for him had to look good in club lighting, basically," she says. "I live and breathe about how lighting affects color and texture."

And we live for these costumes.

Birds of Prey is out in theaters Friday, February 7.