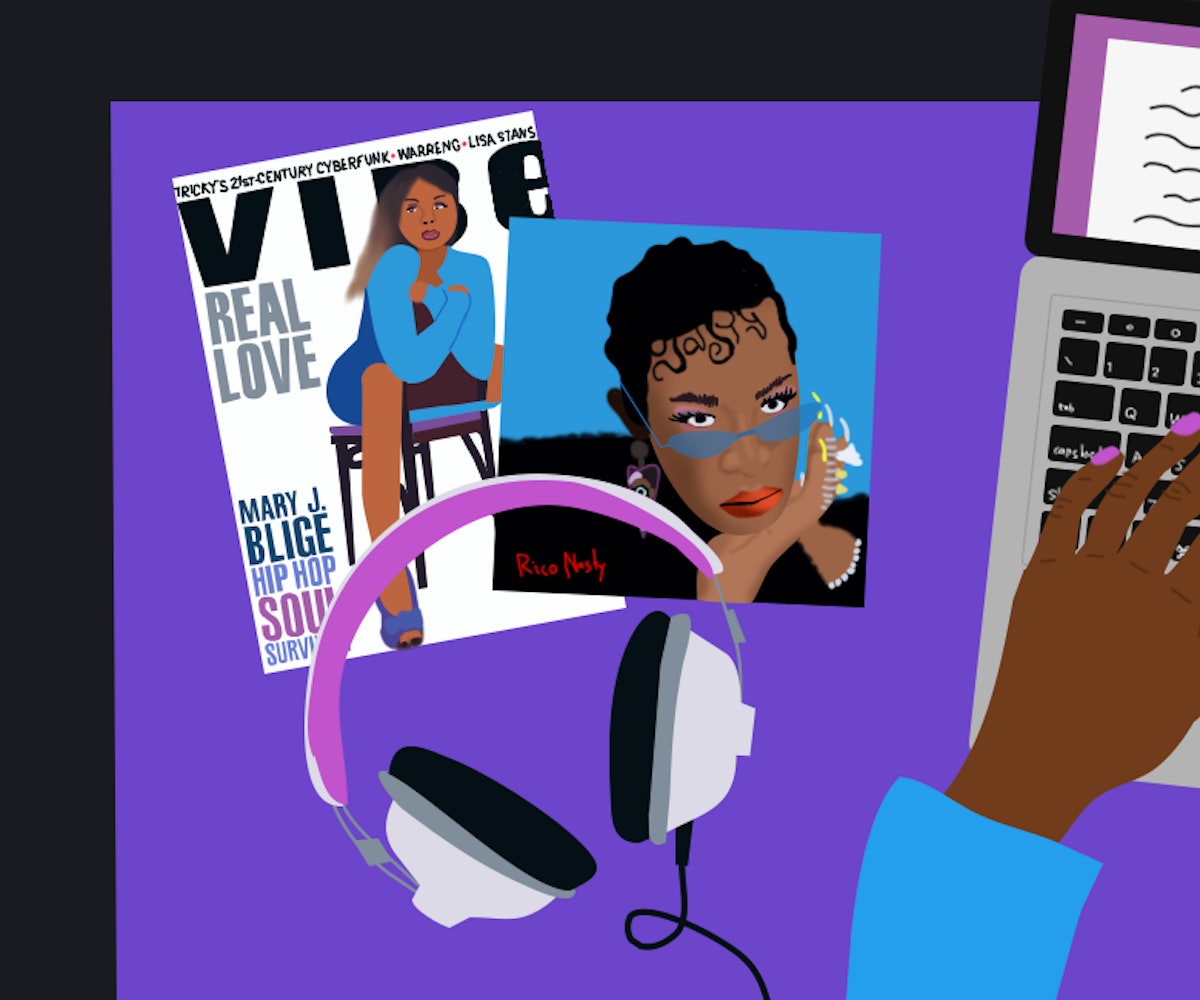 In 2018, an annual year-end report from market monitor BuzzAngle stated that, across streaming platforms, hip-hop was the most digitally consumed genre of music. However, simply because a genre has a broad audience and dominates popular culture does not mean that there's true diversity when it comes to who gets to tell its stories. The ugly truth of hip-hop journalism is that it's overwhelmingly dominated by men, and women are still waiting to have their voices heard within an industry that not only rarely champions them but also intentionally overlooks and undermines them.

Since I was a young girl in Chicago, rap music has always been part of my life. There was never a moment growing up that I didn't feel it was a natural part of my culture and generation. I always begged my mother to buy issues of The Source and Vibe before the internet became the place to get the most intimate look at my favorite artists. There were Black women I admired who were narrating the culture, like Danyel Smith, the first editor of Vibe magazine, and Leslie "Big Lez" Segar, the first and only woman to host BET's Rap City. Throughout my teenage years, once the online-shift started, I enjoyed the thrill of leaving my opinion in the comment section on hip-hop message boards. A few years later, I was a journalism major at the University of Houston, and always on Twitter looking for writing internships. I searched the internet relentlessly for a chance to write about rap. During my quest, I noticed that, even with the advances of music technology, it was still a rarity to find Black women creating content online for hip-hop. It was a harsh reality check to see that weren't as many Danyels or Leslies in the game as I'd thought. Despite hip-hop beginning to foster a creative culture centered around women, it still did not–and does not—have enough women covering it.

Eventually, I started an internship with the Houston Press, a paper whose music section I read religiously every Thursday to see what was happening locally in hip-hop. I showed up to the Houston Press office twice a week to get college credit, and I soon realized that I was the only Black woman in the office. I thoroughly enjoyed the freedom my editor gave me and the opportunity to cover shows by both local and touring artists. However, with all the good came the few uncomfortable and awkward instances where I would get backstage access to interview an artist and be mistaken for a groupie by venue security. It took some time for me to learn how to use my voice to set boundaries and assert myself professionally. But I learned, and I was better equipped to capture the voice of Houston's hip-hop scene. It took Fat Tony, one of the artists I covered, who is now a friend of mine, to point out that I was actually one of the first, if not the only, Black woman to cover hip-hop for the Houston Press.

After graduation, pursuing a career in hip-hop journalism quickly lost its luster. I became a music freelancer and picked up gigs that paid little to nothing. I learned the hard way that most journalism jobs only pay a living wage once you're hired as a staff writer, and those positions are scarce to those of us living outside of New York and L.A. I also began noticing a more troubling trend where my opinion as a Black woman was only valued during certain times, like Black History Month, or worse, in the wake of a tragic event that was trending. For example, at the height of "drill"—a rap subgenre originating in Chicago and popularized by artists like Chief Keef—I turned down several writing gigs where editors wanted me to ask local rappers about violence in the city. Talking about gun violence in the place I grew up isn't clickbait to me, it's actually triggering and really fucking sad. Casually exploiting this kind of trauma was never on my vision board.

Things haven't changed in the years since I left school. This became even more clear to me after I reached out to four women in the digital media industry who have covered hip-hop in the last decade and asked them about their experiences, how they pushed through, and whether or not the girls who still want to cover hip-hop have any hope at all.

"I want women to know that even if they are rapping or clapping on a stage, they make a difference in the culture"

Jazzy Belle modeled for magazines like Smooth and Black Men before she became the host of shows like Streetsweeper Radio on Shade 45 and New York's Hot 97. She currently hosts the Women in Hip Hop podcast, where she discusses women both on the stage and behind the scenes. She is also releasing a book titled 48 Bars of Power focusing on her experience in the industry throughout the years. Belle has been on both ends of the spectrum in hip-hop—as eye candy and commentator—and understands the unfair respectability politics that women face in the genre. "I want women to know that even if they are rapping or clapping on a stage, they make a difference in the culture," she insists.

"I feel Black women's voices are important in hip-hop journalism because we are more than just pop culture writers, we can specialize in covering a certain topic like music criticism and be just as incredible at it as our non-Black and male counterparts," says Bri Younger, music editor at The New Yorker. "Many times, larger publications look to Black women to cover every single aspect of culture, from reality television to fashion, instead of allowing them to write about the one thing they know best," she added. I relate. I've also felt pressured to cover gossip as opposed to meaningful criticism or commentary on hip-hop culture.

This is reflective of a larger problem in hip-hop journalism, one where too many critics are outsiders, passing judgment on art born out of a culture they've never experienced. Ivie Ani is the music editor of Okayplayer. She studied print journalism and Africana studies at NYU and is a Bronx native. Ani considers herself a culture writer, but also believes that most cultures lead back to music.

"When it comes to people who work in music media, in particular, there are not a lot of Black people who get to cover hip-hop, surprisingly. It often feels like we're getting music critiques from a very studied and external lens because it comes from writers who may have grown up listening to the music, but essentially have this 'discovering' moment with hip-hop because they are not living in it," says Ani. She also points out the significance of hiring writers to cover artists who are from the same cities as them. "Speaking the same cultural language as someone is not mandatory, but it is important, because things get lost in translation and it's easier to document the story of someone who is from your culture," says Ani. Going back to the drill assignment I mentioned earlier, bringing in writers with shared cultural experience also lends credibility to the fact that some stories should be re-angled, or not written at all.

"Speaking the same cultural language as someone is not mandatory, but it is important"

Brooklyn White is a freelance writer who covers hip-hop's impact on fashion, culture, and feminism. "I don't think anyone can tell the stories of women in hip-hop better than Black women, just based on the uplifting and comforting feeling of familiarity. A guard is somewhat let down," says White. "I can honestly see that the best way of breaking down and storytelling the art of a Black woman is done in the most eloquent way by another Black woman."

White found herself writing for publications that have a majority women's audience because she felt a sense of intimate camaraderie when covering topics like women in rap. Platforms like The Gumbo, a hub for women who love hip-hop, gives Black women writers like White, and myself, a space to speak freely about a culture we've known all our lives.

For me, there is no hip-hop without Black women. Having Black women documenting hip-hop is of the utmost importance because women rappers deserve to have their stories told by people who share their identity and some of their experiences. Our voices in media should be amplified all the time, not stifled by gatekeepers or tokenized for convenient clicks. Hip-hop is rich with culture—a culture that is nothing without the voices of Black women. For that reason alone, my quest to keep Black women's voices front and center—like the beat—must go on.