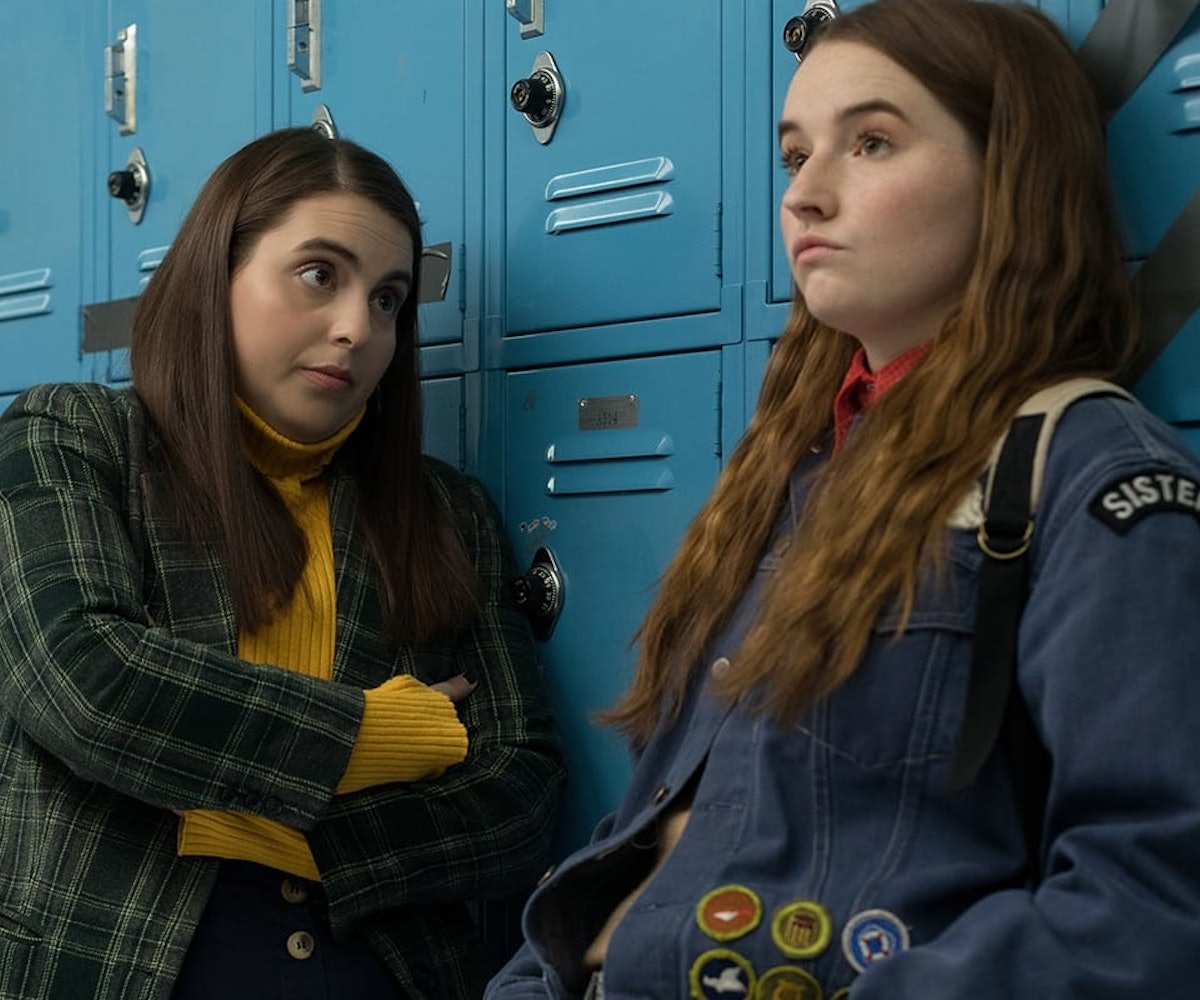 When I was starting college, a high school friend who was at Yale told me that one of her fellow freshmen had hooked up with so many different guys in her first weeks on campus that she'd been given the nickname "Turbo." I was naturally aghast: I hadn't gotten into Yale or been promiscuous. How come Turbo got to do both?

In Booksmart, which was a big hit at SXSW and is poised to be a big hit when it opens this week, a somewhat similar revelation stuns Yale-bound Molly (Beanie Feldstein) on the last day of high school. Like her BFF Amy (Kaitlyn Dever), Molly has made the conscious choice to forgo partying in order to focus on academic and extracurricular achievement—that's what Molly and Amy tell themselves, anyway—but learns that a loathed classmate, called "Triple A" because she gave three male classmates "roadside assistance," will be joining her in New Haven in the fall; that, in fact, all the nemeses who shit-talk her brittle Tracy Flick routine are bound for the same elite incubators for which she's been busting ass for 18 years.

Molly, up to now, has probably thought that personality works like character attributes in a role-playing game, with a fixed, equal amount of points distributed over different traits: You can be good at soccer, math and drawing, but also dyslexic and acne-prone, say; everyone will acknowledge that you're the best actor and singer in your grade, but they'll also always remember how you threw up in your own purse the first time you got drunk. This kind of thinking is a way to wrestle the cruelties of adolescence into a shape that seems plausibly fair.

Booksmart hinges on a very teenage reaction—Molly has worked so hard to define herself in a particular way, so naturally she's furious when somebody else claims her thing—and a very teenage revelation, too: that, to paraphrase Anthony Michael Hall in The Breakfast Club, everyone is a little bit of a brain, an athlete, a basket case, a princess, and a criminal. It's a revelation with particular relevance to the teen movie, a genre in which filmmakers are constantly tempted to pigeonhole characters with subculture-affiliated clothes and accessories, soundtrack cues, and mannerisms. Setting out to smash the tyranny of the clique, Booksmart, the feature directorial debut of Olivia Wilde, is sweet and celebratory about try-hard adolescents on the cusp of college and the Great Reinvention—one which Molly and Amy decide to jump-start by crashing the Epic Party the night before graduation.

Feldstein's older brother, Jonah Hill, was in Superbad, and Booksmart welcomes comparisons with the earlier film: It's likewise an odyssey about getting to a high school party, featuring two friends who've been so close for so long that they're only just becoming conscious of the very real differences in their personalities. (One or two specific moments of sexual mortification are more specific Superbad callbacks as well.) Molly—who wears a sweater and skirt suit even though the movie is set in late spring in Los Angeles—pumps herself up with daily lean-in affirmations about putting in the werk and crushing her haters; Amy—jean jacket studded with feminist flair—is out and proud, though only in theory, as she's never had a girlfriend. They both want to save the world: They cruise around in a used Volvo with a "Future Is Female" bumper sticker, Molly has an RBG doll, and the two of them invoke the name "Malala" as a private meme. Which is fine for teenagers, but this stan-culture stuff has nothing to do with leveraging institutional power for social change—you know, politics—and since the filmmakers don't make any jokes about it, you get the squicky suspicion that Molly and Amy's worldview-as-aspirational name-dropping comes out of the same idealized hindsight with which adult filmmakers always cast adult actors as teenage characters, and fill in their sensibilities with the bands they wish they'd listened to, the things they wish they'd known to say, in order to flatter current teens with characters who are like FaceApp'ed versions of themselves, and to indulge in the soft-focus nostalgia of former teens.

In this case, the aspect of teen life that's being heightened and romanticized is the way in which kids use lofty ideals, uncompromised principles, and big ambitions to cover for the things they perceive as awkward or unformed about themselves. Molly and Amy's interactions are always mutually supportive—the two have a bit where they gag at each other's fashion choices (frequently matchy-matchy), delivered by Feldstein and Dever with a rapport that makes it clear this is a running joke in their friendship. They don't stumble over each other's slightly dorky, stilted inflections. Their rhythms are halting, but they flow around each other snugly.

Booksmart has a matter-of-fact way with phones, such that Molly and Amy's FOMO doesn't feel foregrounded or forced—it's just understood that they'd be watching Instagram Stories from the party they're trying to track down, despite facing obstacles such as draining batteries. Booksmart indulges in some cliches of the teen movie genre, many of which are more or less true: "one epic night" is about the median for high schoolers, and a graduation party isn't too late to make up for lost time, since so many of the "real" and lasting memories from high school happen so late in senior year. It also feels true that Molly and Amy put so much pressure on themselves to have a great time—they're almost too nervous to knock on the door, though by this point, everyone is drunk already and happy to see them—that they ignore many more interesting stopovers on the way there, like a very Pimp My Ride-style party boat, with light-up dancefloor and canapes, that's basically a ghost ship; and a drama geek's extremely elaborate murder mystery party, all to get to a house where someone, like, ate a ghost pepper and chugged a lot of milk.

When they do get to the party, it may remind viewers of a very specific age of the video for Jimmy Eat World's "The Middle": a teen house party, filled with perfect young bodies in pale, wet-looking flesh tones (there's a pool scene), where everyone who isn't the protagonist seems to already be making out (Wilde throws kissing extras into the background of one or two shots), until two scared, withholding kids find each other having retreated into an empty room. And why not? Because, listen. It just… takes some time! These girls really are in the middle of the ride, but everything (everything!) will be just fine, everything (everything!) will be alright.

That I've just expended deadass an entire paragraph describing Booksmart in relation to an emo song that came out when I was in high school should be a clue that this is an enormously charming movie, despite being frequently repetitive, sloppy, and secondhand. Wilde introduces Molly and Amy popping and locking to non-diegetic music, then cuts the track out on them while they continue their sidewalk spasms—it's a nice joke, but it rather undermines the next 10 or 20 minutes of the movie, which are just wall-to-wall with slo-mo character introductions featuring kid after kid swaggering toward the camera to a hip-hop boast track. (Wilde resets scenes with needle-drops a lot; the soundtrack is mostly rap and R&B until the serious emotional moments, when she switches to sit-in-your-bedroom-swelling-with-tears indie pop.) Jokes are lifted almost wholesale from Party Down (that empty blinged-out boat party!) and Almost Famous, and there are nearly back-to-back scenes in which a formerly one-dimensional character volunteers the truth about a notorious sexual rumor surrounding them.

Booksmart has four credited screenwriters—each of whom plainly thought someone else was going to write Molly's big graduation speech—and this leads to weirdly truncated or misshapen character arcs, like Jessica Williams as Molly and Amy's "cool" teacher, a role that seems haphazardly built up late in the process to accommodate a grown-up name talent. (Though some subplots which were undeveloped, or amputated in the edit, actually work better—it's understated and intriguing that we never meet Molly's parents—only guess at the loose grip with which they cling to the lower middle class, and at how that motivates her striving.) Different scenes play out in different registers of realism—this was not an issue with the seamless Superbad, which holds up better than I'm guessing Booksmart will—and there are poorly motivated, almost standalone sketches which only skate by on the strength of Feldstein and Dever's bracing hyperverbal no-filter repartee, like when they watch porn on a smartphone in the backseat of a Lyft, for… reasons. Billie Lourd (Carrie Fisher's daughter!) is great as classmate Gigi, swanning around the screen in a series of Art Basel Miami clubbing outfits and making use of an alarmingly dynamic vocal range for pronouncements splitting the difference between acid-freakout and infantile; Wilde uses her as a cheat code to get out of scenes with an absurdist flourish.

Gigi is not a type, and, in fact, there are barely any teen archetypes in Booksmart, or at least the archetypes are so fresh that they haven't become teen movie cliches yet—a nonwhite stoner-programmer bro, a posi sk8r gurl. So much of directing is running a set, creating a space in which actors can feel supported and joyful, and by that measure, at least, Wilde seems to have done a fine job: her cast goes big, whether showing off for each other at Alanis Morissette karaoke, riffing on childhood stuffed animals-turned-sex toys, or digging into the quite quotable dialogue with theater-kid excitement. Flawed as Booksmart is, it will be a special movie for the Class of 2019. It's a fantasy of adolescence in which every kid gets to be, as Lady Bird's mom says, the very best version of themselves, by pushing outwards against their limits.

Booksmart is out in theaters on May 24.