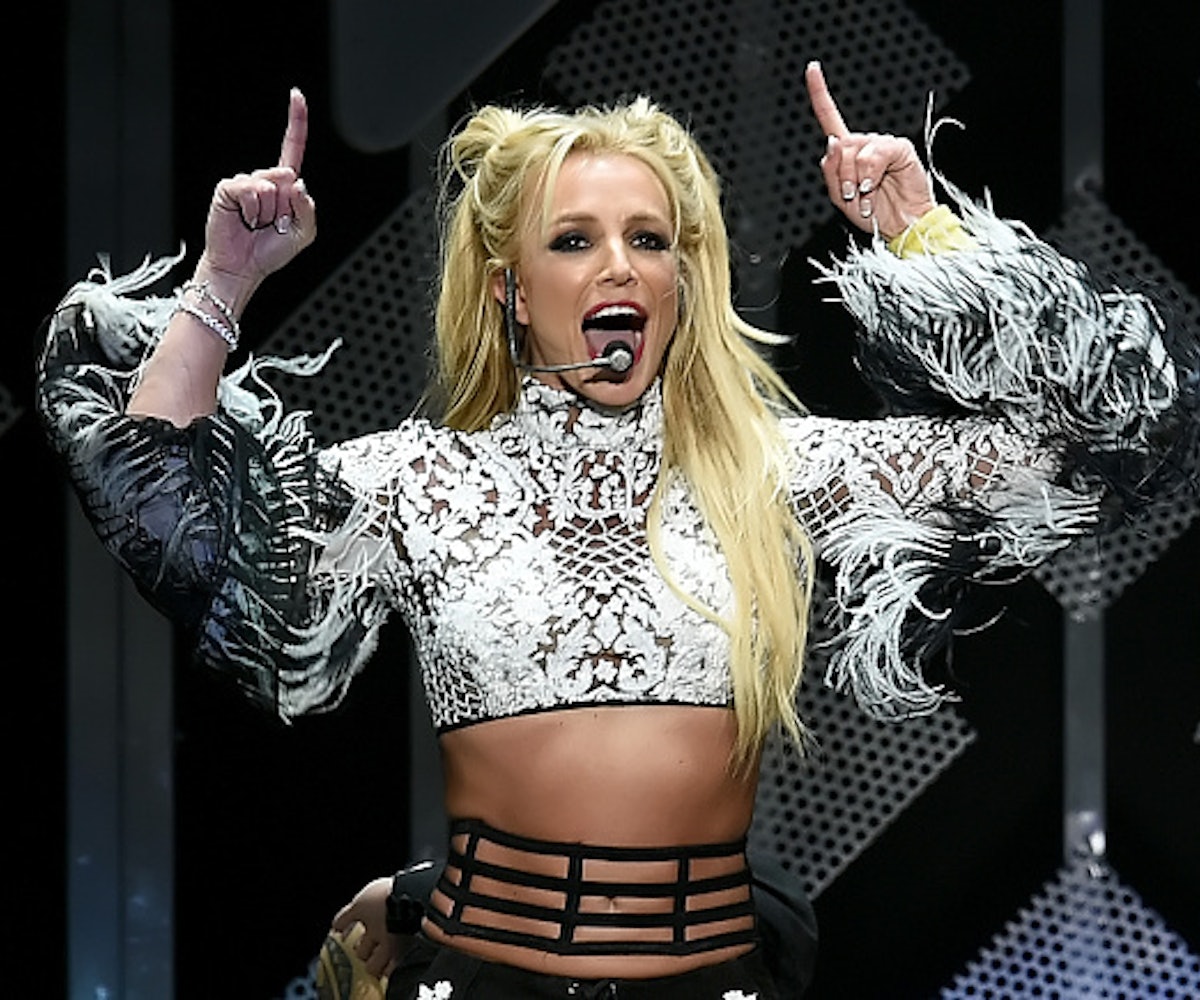 Domination. Prerogative. These are the names of the only two saved Stories—the highlights—on Britney Spears's Instagram. They reference, respectively, her upcoming Las Vegas residency at the Park MGM and her new perfume, a unisex scent which Spears has described as "fruity, earthy, and woody with unique notes like Red Goji Berry and Saffron Cream that make it extra special."

But then also, the words are metonymical for Spears, who has, in the 20 years since the video for her instant-classic "...Baby One More Time" hit MTV, not only been an omnipresent force in the cultural discourse but also pulled off this feat in a way that is unmistakably and inimitably her own. It isn't so much that it is Spears' intention to dominate everything, but more that it is her prerogative.

In her 37 years on this planet, Britney Jean Spears has occupied many roles, both professionally and personally, some of which have proven to be more successful than others. Though, it should be said, that her failures, like her brief stint as a restaurateur, serve both to emphasize the towering heights of her successes as well as to make clear that her victories are the purest distillations of Spears herself—her personality, her thoughts, her desires. This, then, is why she excels in areas where others might fail, because they are evident extensions of who she is and what she wants. And this is why her Instagram is so perfect, because it is there that Spears is most unfiltered, transparently a person, not, as is the case with many celebrities, merely a persona. Or, rather, her persona is indistinguishable from who she is as a person, making it easier for her to navigate both in a unified way.

Spears' Instagram first became a widespread object of fascination in 2017, when she posted a video of herself—ponytail perched high on her head, cleavage perched high on her chest—painting in her backyard, a non-diegetic Mozart concerto tinkling in the background. The caption? "Sometimes you just gotta play!!!!!!" (I remember approving her use of an even number of exclamation points since I think using an odd number is a minor—and annoying—act of aggression.)

I had been following Spears' Instagram art for some time prior, though, to this post. A drawing she'd made in early 2016, consisting of swirling lines of color is not wholly dissimilar from a Brice Marden painting (okay, yes, actually it's wholly dissimilar), announced: "It's doodle time!" It was a particular favorite of mine, not least because of her use of the painter's palette emoji. Spears wields emojis like the late-millennial mother of two that she is, that is to say, prolifically.

And it's not just emojis that are plentiful on Spears' Instagram. Also abundant are: inspirational quotes (including "inspirational" quotes from Nietzsche), videos of her dancing, photos of her sons' artwork, clips of her stalking down her mansion's hallways as if they were Paris Couture runways, photos of the beach and of sunsets and of sunsets on the beach, a photo of Spears and Hillary Clinton. All of these are examples of things most of us are conditioned to find cliché and suburban mom-like and embarrassing. It can feel like the only thing missing from Spears' Instagram is a plea to buy essential oils or, like, some really cool leopard print leggings. They are all the sort of posts that ordinarily lead to mockery, or at least pity.

But then, Spears has always toed this line, this invisible, uncomfortable delineation between what is acceptable to perform in public and what we know exists in private. She has let us celebrate those things we enjoy but of which we've been taught to feel ashamed. She's done this ever since the first time many of us saw her, when she wore a blatantly sexual riff on a Catholic schoolgirl's uniform. By playing out, in excruciating detail, the most overdone sexual trope of all time, Spears excelled at embodying our collective id, acting as a mirror to our own, often stifled, desires and impulses. She makes us question why we find these things pathetic, challenges our perceptions of what is embarrassing and what is just human, makes us question why we need to feel bad about who we are.

This isn't to say that there aren't things to feel badly about, to feel uncomfortable as we watch them play out in her life, or our own, whether it's a 55-hour-long marriage to a virtual stranger or a public breakdown when the pressures of fame and mental illness get to be too much. But a little discomfort is okay. And, in her darkest moments, what Spears taught us to feel wasn't pity, but compassion—for her, yes, but ultimately, hopefully, for ourselves as well.

And so while loving Britney Spears is, currently, a popular thing to do, it's important to distinguish those professing their love for her sincerely from those doing so ironically. Those who love her ironically probably do so because it is easier to keep Spears at arm's-length, lest they too fully realize how close to her they are. It's a little bit like loving your mother, or an idea of your mother; you can't help but worry that love will transform into becoming her, or that idea of her. It's not—not really—very cool.

But if there's one thing Spears' Instagram can teach us, it's that being cool is not a means to an end, nor is it necessarily the end itself. The reason Spears continues to dominate is because she is consistently, almost decadently, herself, and she is so in a way that feels liberating to witness, so difficult it is to be that way in our own lives. So as we struggle to make sense of who we are, who we want to be, who we'll allow ourselves to become, it is nice to have an online oasis of sorts, a relief from the constant posturing that exists everywhere else, a place where we can't help but be reminded that it's boring to pretend to be normal, we should all just, as Spears reminds us, go back to being ourselves.