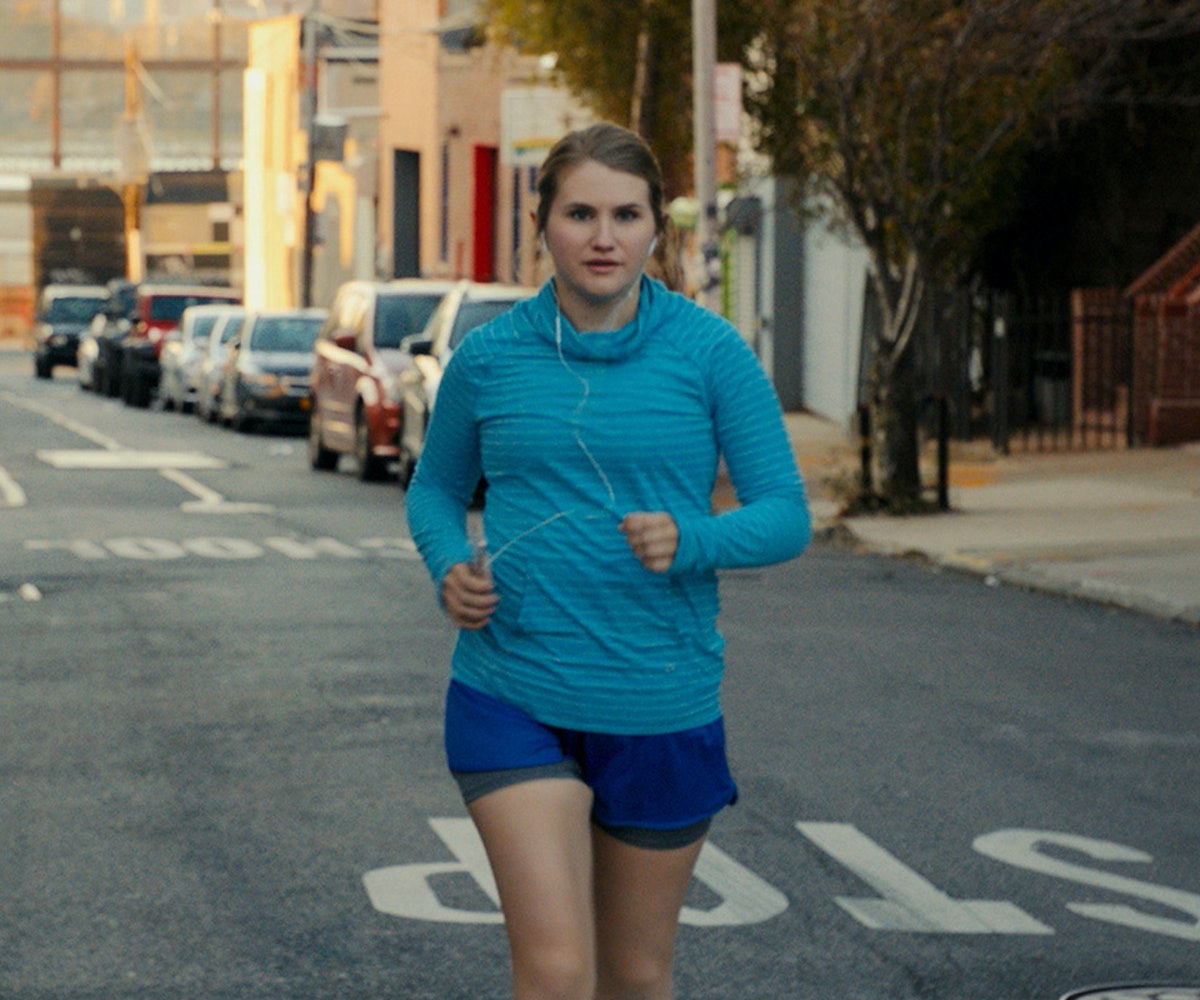 An early sequence in Brittany Runs a Marathon captures a feeling I hadn't seen in a movie before, at least not portrayed with such sharp specificity. In it, Brittany (Jillian Bell), a messy late-20-something who has just been given a dire health prognosis from a doctor she was attempting to scam for an Adderall prescription, decides to grim up and start running, for exercise. She suits up in makeshift exercise clothes several times before finally making it out the door and awkwardly pushes herself to just start running down New York City streets. It's a clumsy process, as she dodges passersby and feels winded almost immediately, and Bell gives a vivid performance as a woman who doesn't know quite what to do with her body. Her whole first run has the subtext of: Is this it? Am I allowed to be here? As a perpetually overweight New Yorker who took to gym-free running for a time in his late-20s, I felt, as the kids say, seen.

The rest of Brittany Runs a Marathon is not quite so observant. It wants to be both a weight-loss and a body-acceptance narrative, and doesn't always navigate that minefield with grace. Writer-director Paul Downs Colaizzo seems to have his heart in the right place, and makes sure to have Brittany's doctor tell her that, of course, all body types are beautiful, plenty of "overweight" people are actually quite healthy, and that her weight is mainly a problem because of how it seems to be affecting her blood pressure, liver function, and so on. There are no real jokes made at the expense of Brittany's weight, apart from a few self-deprecating remarks from Brittany herself (even then, they're more about her lack of fitness). The movie tries to make clear that this character needs lifestyle changes that have nothing to do with her appearance—and even gives her a late-breaking unhealthy obsession with reaching a goal weight rather than making smart choices.

But as it turns out, Colaizzo gets his story to that point by issuing judgmental diagnoses of Brittany's non-weight ills: She drinks too much, stays out too late, does too many drugs, eats unhealthily, shows up to work late, makes everything into a joke. Of course, all those things can be bad for you, and there are plenty of movies that seem not to realize how their characters' "funny" drinking habits would qualify as alcoholism in real life. But, Brittany Runs a Marathon bolts in the opposite direction, dragging its lead character along with it. When she decides to train for the New York City Marathon, just to prove she can do it, Brittany makes some changes: She eats salads, goes to bed early, stays away from alcohol, gets a job, and, uh, stops making jokes.

It's that last one that feels most baffling in a movie that seems like it's supposed to be a comedy. Bell is certainly funny; early on, the movie shows her at her job as an usher in a small theater, creating jokes and bits out of virtually nothing as she hands audience members their programs. It seems at first like the movie wants to characterize her as a failed improviser who's always "on" and can't latch onto adult responsibilities. Instead of sticking to that type, her character and backstory zig-zag confusingly: She wants to be involved with acting or singing, then gets a cushy house-and-dog-sitting job to finance her marathon training, then reveals her past as an intern at a prestigious ad agency, and a lifelong dream to write advertising jingles. It's, as the kids say, a lot. And none of it is particularly rooted in the economic reality of living in New York without a reliable income. Her housesitting job is a plot convenience to provide the movie with an additional location and a possible love interest (Utkarsh Ambudkar). Come to think of it, convenience describes a lot of the movie's characterizations, which are supposed to offer surprising layers, but mostly just turn on a dime: Brittany's roommate (Alice Lee) is her slightly superficial bestie, before she quickly turns cruel; Brittany's neighbor Catherine (Michaela Watkins) is fussy, before she quickly turns tender and motherly.

Worse, none of this is especially funny, because the movie more or less swears off being funny by around the halfway point, like a comedy trying out some kind of nontraditional no-laugh diet. Maybe Brittany Runs a Marathon is supposed to be a chance for Bell to stretch out dramatically, but there isn't much dramatic tension in marathon training when most of it happens in seasonal montages. The immediacy of that early, harrowing running scene melts away with the pounds. The slacker-self-improves narrative and the moralistic overtones that remain might remind some of Judd Apatow—but at least Apatow, for all his traditionalist leanings, doesn't use messiness and rawness exclusively as cleaning fodder. Twenty-something coming-of-age comedies often have to contend with a structural problem where the early debauched shenanigans are funnier than the inevitable growing up; Brittany tries to address this by making the whole thing kind of humorless. To young city-dwellers in particular, it may feel like a visiting parent's list of grievances.

Brittany Runs a Marathon is out in theatres tomorrow.