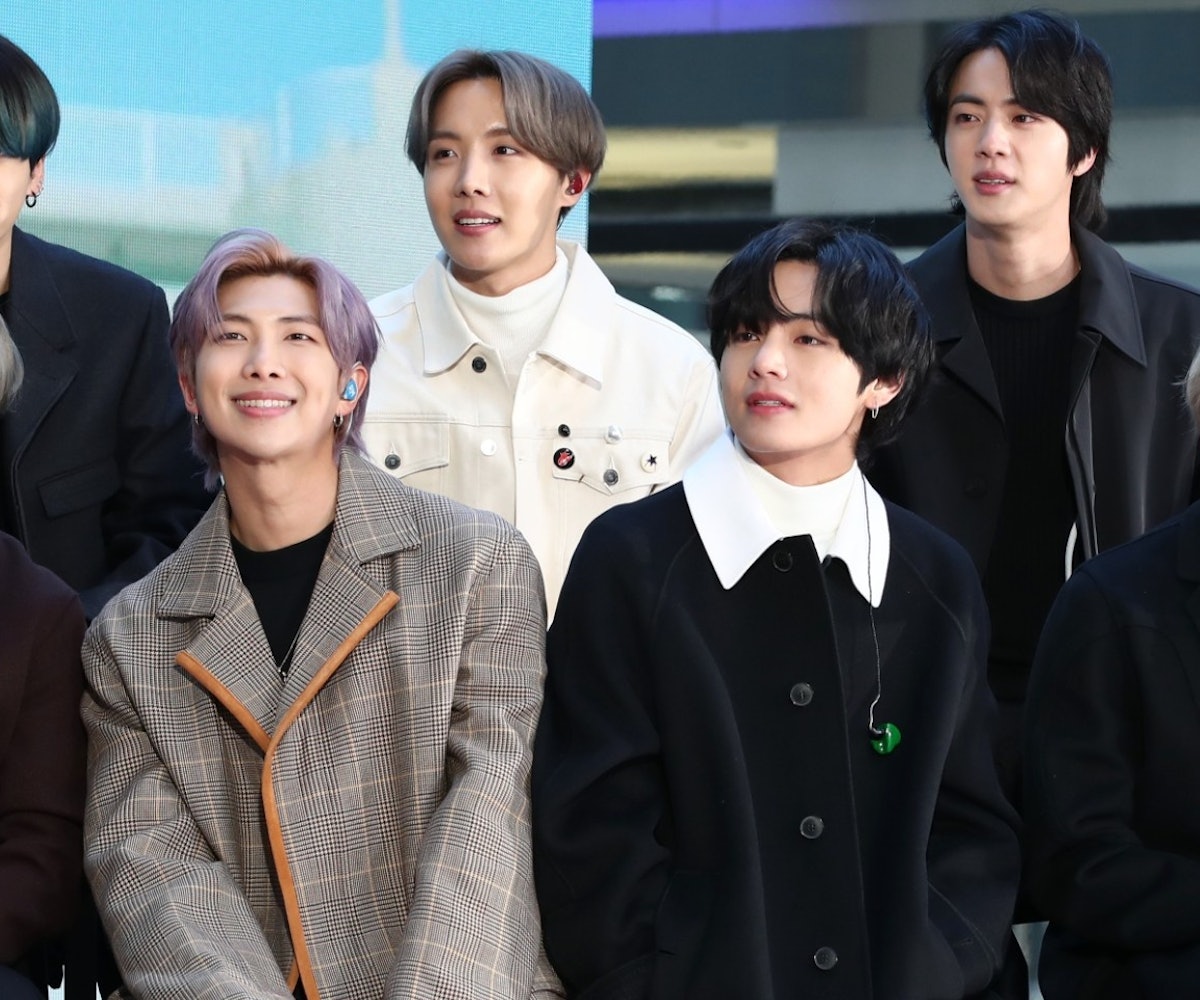 Here's everything BTS did last week: release their new album, Map Of The Soul: 7; have that album become the best-selling album of 2020 within an hour of its release; debut No. 1 on all real-time Korean music charts, an achievement known as a "Perfect All-Kill" in K-pop circles; and made the ARMY's emotions go haywire — all in a day's work.

Naturally, I did what anyone would do in this very trying time: comb through 7 to pull out all references to their universe and vivisect their songs to place them at points in their philosophical trajectory. From recurring references to their previous discography, to revealing instances when their intense lifestyle has felt like a drain on their creativity, to their thoughts on balancing fame with artistry, here is why Map Of The Soul: 7 is the most personal, cohesive, and honest look into BTS yet.

From 7 Members To A Global Family

Understanding the album's title, 7, is a good place to start. Looking at it literally, the seven members of BTS have been an official act for seven years now, having debuted in 2013. It's a short time to go from being a rookie act from a small South Korean label to becoming the biggest band in the world. The tracks on 7 serve as pockets where the members retrospectively analyze the people they have become over the "seven winters and springs," as the song "We Are Bulletproof: The Eternal" goes.

BTS' leader, RM, put it concisely at the global press conference for the album's release: it's a look at the past and a welcome to the future. "Looking back at the seven years, going back to the beginning, there were times we were completely clueless, times we made mistakes, and things I feel we did well on," he said. "But going back, thinking of how each of the other six members were beside me, I think they did really well, and I think a lot about how fortunate I am."

The Theories of Carl Jung

7 and its predecessor, Persona, both thematically draw upon the philosophical theories of Carl Jung and his studies into mapping a human being's psyche — or "map of the soul."

In Jungian philosophy, one's "persona" refers to the psychological mask or identity that we project onto the world. It's the role we play every day: a second skin we've worn so often that it's sometimes indistinguishable from our actual selves. One's "shadow," however, consists of the bits we hide away: our weaknesses and darkest desires. If our persona is the front we put on, our shadow is the pain we lock away; if one side exists, the other must be absent. Jung, however, argued otherwise, essentially implying that to attain happiness, one must make peace with one's demons.

Although the concept of persona and shadow appears consistently throughout Map Of The Soul: 7, it's most directly referenced on Suga's "Interlude: Shadow," the song that introduced the album to the world. On the first verse, Suga says: "I run but the shadow follows, as dark as the light is intense." Toward the end of the song, however, he's changed positions: "I'm you, you are me, now do you know…You'll be at ease if you admit it too." Where in the beginning he wanted to run from his inner conflict, the end sees him embracing it.

The Darker Side of Fame

The main conflict on Map Of The Soul: 7 is BTS grappling with their fame, and the realization that their creative energy isn't infinite; if they draw upon it too much, their spring can dry up. Throughout the album, the band scrutinizes the effect their continent-to-continent life has had on their creative output and psyches. On "Shadow," Suga sings about how he wants to be more than just "rich" and a "king" — he wants to be himself. The sentiment mirrors his interview from BTS' 2018 YouTube Original series, Burn The Stage, when he said: "At first, I wanted to succeed and make money. But strangely, I didn't want to become famous."

BTS' art film for the track "Black Swan" opens with a similar-sentiment quote by Martha Graham: "A dancer dies twice — once when they stop dancing, and this first death is the more painful." It lays bare their fear of creative burnout, and it's eerily reminiscent of the pilot episode of Burn The Stage, where RM says: "Some days I don't want to work. People think I always work hard, but sometimes I just lie down and sleep."

Later, "ON" repeatedly circles back to that crucial artist's dilemma, and the importance of reconciling one's shadow with one's persona. Making art will demand the most out of you, and the only way to succeed is to "throw [yourself] into both worlds" and "go insane to stay sane," the song lyrics seem to suggest.

It's a process that BTS has undergone again and again in their musical eras, from the pumping vigor of 2015's The Youth Trilogy to the growing pains of 2016's You Never Walk Alone. On Map Of The Soul: 7, BTS has let us in on just how much their art means to them, marking it as their most personal album yet.

A common critique of BTS's music — and most East-Asian pop acts — is that their lyrics often don't make sense to the common listener. It's an observation that sort of misses the point; Map Of The Soul: 7 is an album for BTS and their fans, ARMY. Littered with numerous references to the band's career, the album is steeped in nostalgia, and requires insider knowledge to fully understand.

For example, their music often references elements from a past era. Titularly, "ON" directly mirrors the group's 2013 song "N.O," and the song's music video sees the band decked out in black-and-white, as they were in "N.O." Their dance formations recall those in 2016's "Not Today," while lyrically, member Jungkook references their most famous track, "Blood, Sweat, and Tears," on the bridge, singing: "My everything… my blood and tears."

Their music also tends to include insider-references that serve to construct a rich and larger universe. On "Inner Child," member V mentions a "silver galaxy," presumably the same one RM references on "Magic Shop." On "Friend," Jimin calls V "his alien," harking back to a nickname that V earned in the band's early years due to his unique personality; V completes the nostalgia circle by singing about the "dreamcatcher in his room," a direct reference to when Jimin bought V a dreamcatcher necklace when he was having trouble sleeping. With every lyric, BTS dive further into their own selves and mythology, examining the evolution of their dynamic and sharing the moments that brought them to where they are today.

For the most committed and informed, Map Of The Soul: 7 is not just an album. Listening is akin to rifling through an old diary, smiling at some parts and cringing at the others; the lyrics meant to be understood only by the band members themselves and their fans, who have stood by the group like stalwarts. The album is, as the band puts it, a love letter.

Understanding how far BTS has come means also knowing that "We Are Bulletproof: The Eternal," a title that is a derivative of a two-parter track of the same name, is an epithet they carry proudly. Gone are the early days in their career when the name "Bulletproof Boy Scouts" elicited amused chuckles. Poised on the edge of history, the members of BTS have gotten to where they are by leaning on each other and reminding themselves why they started pursuing music in the first place. On 7, they give fans a valuable glimpse into their world.