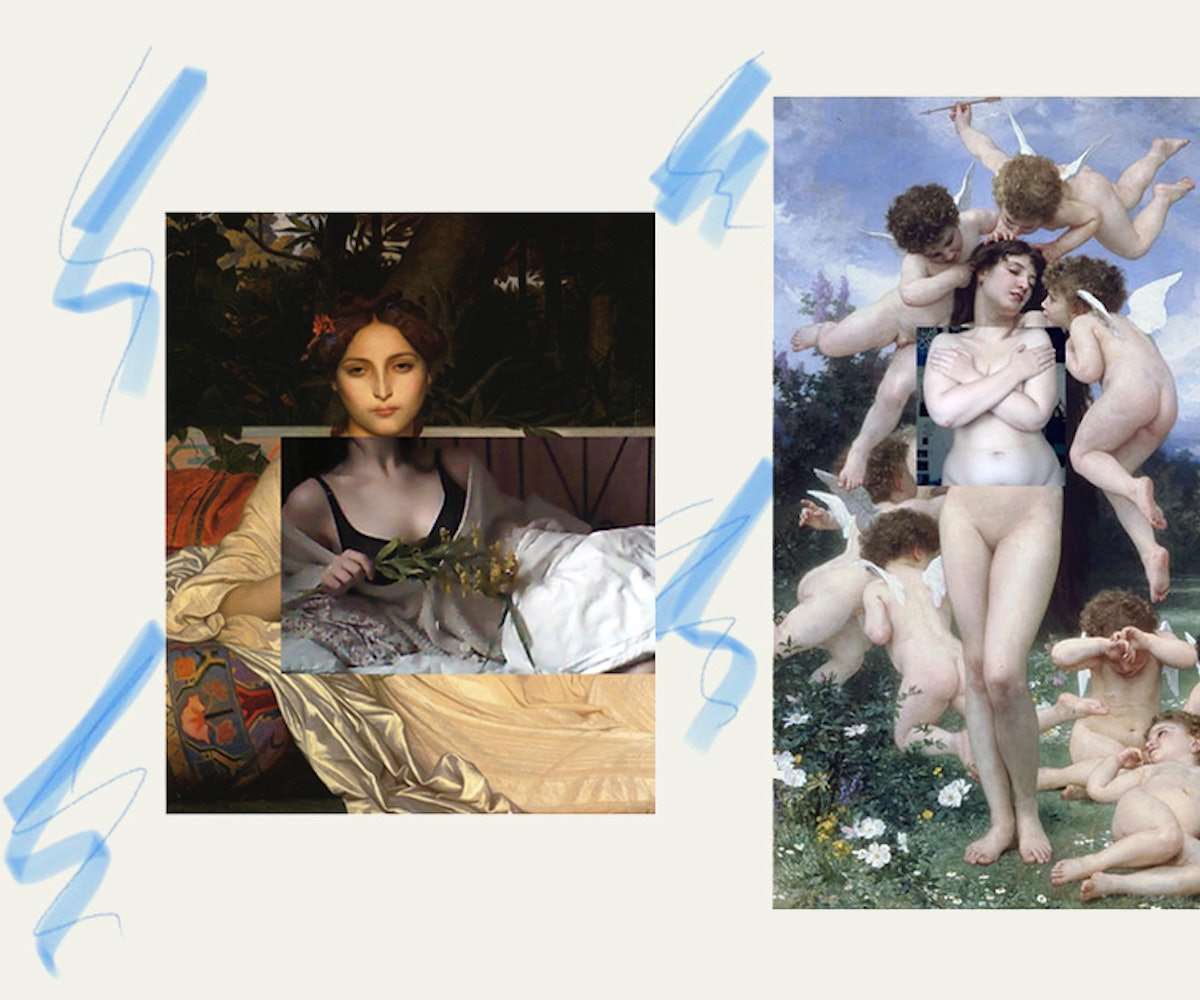 In 2013, before it was hit by draconian anti-nudity regulations, Tumblr was the center of pretty much everything exciting happening on the internet. A hub of creativity and a haven for sex workers and female and LGBTQ+ artists alike, it allowed adult content to co-exist and thrive alongside more traditional forms of art. Out of this fertile environment emerged CamGirls Project, a digital collage series that invited girls on the internet to submit their naked selfies to be superimposed onto Renaissance nudes.

The idea of U.K.-based artist Sessa Omoregie, the project has gone through various manifestations since then (including IRL exhibitions and a hard copy zine), but what has remained constant is its commitment to giving the power back to muses who captured the male imagination but were never given the opportunity to control how they were represented.

In light of the Tumblr nudity ban and its implications for creatives concerned with the politics of female representation, Omoregie sat down to answer our questions about the reclamation of female agency online, representation, and how her project pre-empted the Google Arts & Culture art selfie craze.

How would you describe your art practice?

I'm very much a conceptual creative, invested in storytelling with an all-around approach to visual art and creative content.

How has your work developed over the years?

I'm always looking for new mediums to tell stories and ideas, so I've kind of had to wear a lot of hats mostly as a creative/art director. I'm definitely more aware of the digital climate we live in so my work has become a lot more collaborative, shareable, and palatable I guess.

What are your passions and aims as an artist?

Cinema is a huge inspiration for me, I love the romance of storytelling and I'm a copywriter too, so I love the meeting of words and image-making. I think I'm aiming for my projects and works to be short sort of still-life films in their own right.

When and why did you decide to start CamGirls Project? What were the inspirations behind the project?

I've always been in awe of classic paintings, specifically Renaissance paintings, so I knew I wanted to contribute to that type of art in some way. However, I'm not a trained painter, so I was really inspired by the mediums I had access to, which is, of course, the internet. So it really turned into a collaborative effort with the community in bringing a new perspective to these paintings. It brought up a lot of themes surrounding body autonomy, agency, image, and censorship.

You initially started the CamGirls Project via Tumblr in 2013, how do you feel about Tumblr's nudity ban?

It feels somewhat aggressive in the way they enforced such a blanket ban without really thinking about their users. CamGirls started on Tumblr, but it's since moved to a website, so it feels kind of sad that it's not connected to its roots anymore.

"Cam girls" is a term we associate with webcam models, but, from my understanding, the project doesn't necessarily focus on cam girls but is created in collaboration with women generally—even if some of them also happen to be cam girls in the traditional sense.What prompted you to use the title "CamGirls Project"?

Yeah, definitely taking that term from its intended use; I wanted to normalize it in a way. But also tap into reversing its use as an insult or derogatory term for women on the internet who enjoy taking selfies and being in front of the camera.

The project juxtaposes women's naked selfies alongside Renaissance art; would you say this is a comment on female agency and the ways which women are increasingly in control of their own representation?

Yeah, for sure. The only difference between the paintings and the photos (besides their media) is that the women in those photos captured their own image of themselves. So I liked the idea of what would happen if "Venus" had a camera; what do these paintings mean if we were told they were actually self-portraits. I think it's a lot more powerful.

I love the idea of democratized art, especially in an industry that can feel very homogenized. I really enjoy the idea of saying, like, "Fuck it, I'll do it myself," rather than waiting to be validated by institutions. You can set up an Instagram page as a "gallery" or you can crowdsource an exhibition and set up an art collective via FaceTime—I think that's great.

What are your opinions on the political and aesthetic importance of the selfie?

Well, actually the point is I don't think it's important in and of itself, but what's important is representation and agency. I think the selfie has become a sort of scapegoat for criticizing people—especially women—for wanting to take ownership of these things.

Your work has been shown in exhibitions in the likes of London, Copenhagen, and Berlin, and you've also released a zine. What draws you to these IRL or physical modes of display alongside having a web presence?

I think IRL and URL are complementary mediums, I don't think the internet should mean the death of print, so I'm always really excited when I can see my work live out in both these forms.

This project will be particularly interesting to many for the way it seems to have pre-empted the Google Arts & Culture art selfie. Why do you think we have this fascination with seeing ourselves represented in the art of the past? Do you think this is to do with representation per se, or is it more to do with creating a dialogue between our present and the cultures of the past?

It's really cool, actually, when I saw the Google art selfie, it really reminded me of why I started the project. It's just really fun, for the first time we have all this technology and different forms of mediums to really be involved in art in ways that we didn't have access to in the past. I think an obsession with representation can be portrayed as conceited, but I really think it's a healthy obsession that's useful in creating a world where we don't see the same types of people in our art and media over and over and over again.

It's been highlighted in recent years that the art world can be quite exclusive and lacking in diversity. Would you say that CamGirls project has worked to combat this in some ways?

I can be my own critic in saying that, in hindsight, I feel that the project could have worked harder at being a bit more inclusive. But I think that the idea of it definitely opens up that discussion about where different people and bodies fit into the art we see today.

Do you have any more projects in the pipeline artistically—both regarding work on the CamGirls project and your practice more broadly?

I've been working with collaborators doing workshops and exhibitions, which has been a learning experience. I'm currently working on new content that I feel better serves the climate of the internet now, in a post-Tumblr digital climate. I'm really working on growing it as a brand, perhaps even creating an umbrella where new projects live together alongside the CamGirls Project, telling the same story in different ways. For now, I hope people can enjoy the project at Camgirls-Project.com and on Instagram, where it's more curatorial.