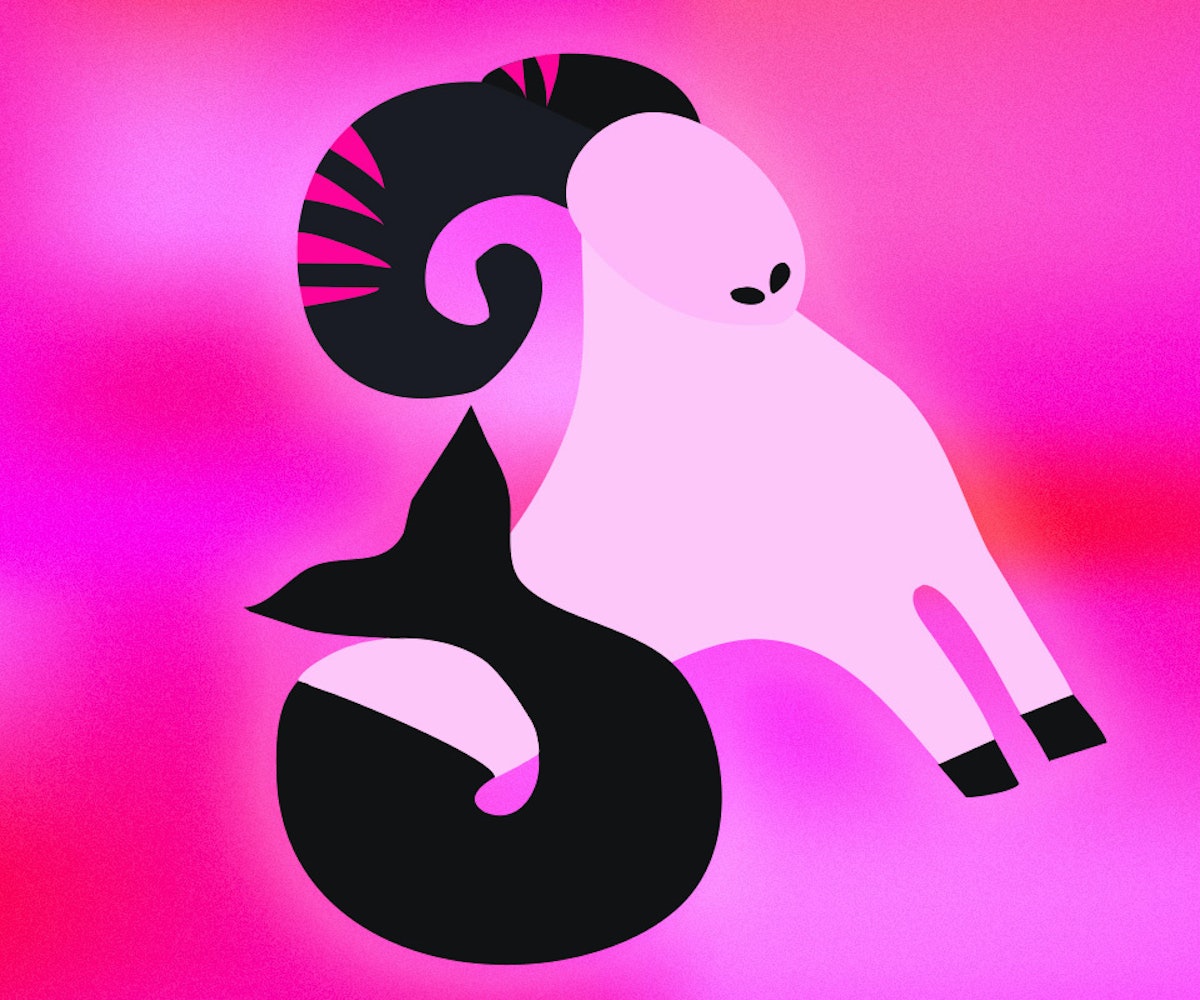 It is said that "slow and steady wins the race," and if I'd never met a Capricorn, I would've sworn that the originator of that saying had not one lick of sense. But, I have met a Capricorn. Many. In fact, I was raised by a Capricorn mother! Capricorn traits include tenaciousness and ardent love, and their devotion to excellence is unparalleled. Still, how is it possible that something as slow and steady as a turtle (or a goat with a fishtail who insists on taking the long way 'round) can be the first to cross the finish line when competing with, say, a hare?

There are two answers. The first (very important) answer is that all Capricorns have magic powers, accessed through their spiritual connection to the material realm (think: the pentacle suit in The Tarot), and they can use these powers to shift outcomes in their favor. The second answer is that Capricorns are often the ones who make the rules, and, as arbiters of the rules, they can decide when to break them. Some of them include, but are not limited to, the rules of physics that allow something slow-moving to best something moving at a much faster pace.

There are people out there who mistake Capricorn's classic looks and direct speech for a dull person. There are fools out there that believe Capricorns are mostly fuddy-duddy suits or sticks in the mud. But, Capricorns are a cardinal sign—a sign that generates change—and they radiate talent as well as a killer sense of humor. Just look at Sissy Spacek, Sade Adu, Dolly Parton, Mary J. Blige, Jim Carrey, and Betty White. Now, I couldn't interview any of those Capricorns, but I do have two magical women born under the shadow of Saturn who anybody would be lucky to cross paths with.

Dorothy Lyczek is a color genius, whose tattoos are about as close to paint on canvas as skin can get, who lends a great deal of her creative labor to fundraisers, good causes, and community events. Rachel Mckibbens' poetry has probably saved countless lives. She is also a mother to five children and a coven mother to many a wayward witch.

Read on to find out just what having a sacred ritual means to Capricorn, what oil can help clear a cluttered mind, and what bean must be respected above all others.

Dorothy Lyczek is a tattoo artist from Brooklyn. She specializes in botanicals and natural imagery. Lyczek opened her own tattoo shop, Lantern Tattoo, in 2018.

If you had to choose one quality or trait you possess that you identify as heavily Capricorn, what would it be?

I am very dedicated to what I do. Tattooing demands a certain level of intensity, and I am very grateful to have found such a beautiful way to channel my intensity.

Lots of astrology content links food obsession to both Taurus and Cancer people. Do you have a favorite recipe? Something that you make especially for people you love?

I love food! I'm obsessed with good food, and I justify almost all the things that I do by their proximity to a good snack. Or, knowing that when I am done with a certain task, there will be tasty food I can reward myself with. I recently started baking, actually, and find great pleasure in making Nutella Tres Leches for my family.

One trait many Capricorns share is their propensity toward righteous anger. Righteous as in fueled by an ethos or a moral/collective outrage. When you feel overcome with a powerful emotion like that, how do you channel it in a way that feels good and energetically sustainable to you?

By trying to find something new to do or see or try. Something that will distract me from whatever's pissing me off in the moment that I apparently have no control over.

Capricorns are rumored to be traditional, "conservative" people with a lack a flare. Traditional can, however, also be translated into ritualistic—or a people who have respect and reverence for what's sacred. Because almost every Capricorn I know is a witchy person, and you are no exception, I wonder if you might speak to the role of sacred ritual in your life.

Ritual plays a big role in my creative process. In tattooing, every action from setting up, to applying the stencil, to actually tattooing and cleaning up the space, are all ritualized activities. Plus, the way I do things at work is very routinized. I also have rituals that I follow when I paint; burning frankincense and making sure that every plant in my home is well watered puts my mind at ease and allows me to just get lost in my work.

If price were no object and possibilities were limitless, what would be your dream project?

To buy a church and convert it into a hydroponic garden. This is a bit on the nose, but a hydroponic Garden of Eden, I guess, that is free for all to come and feast on the fruit.

What fabulous Capricorn things are you up to?

I opened a storefront, Lantern Tattoo. I work by appointment only so that I can provide a comfortable and private environment for my clients. The shop is packed with plants that keep me inspired since I mostly focus on botanical tattoos.

Rachel McKibbens is a two-time New York Foundation for the Arts poetry fellow and author of four collections of poetry: Pink Elephant, Into The Dark & Emptying Field, MAMMOTH and blud. In 2012, McKibbens founded the annual Pink Door Writing Retreat, open exclusively to non-men writers of color. McKibbens is a member of Latinas Unidas and co-curates the critically acclaimed reading series Poetry & Pie Night out of her bar, The Spirit Room, in upstate New York.

If you had to choose one quality or trait you possess that you identify as heavily Capricorn, what would it be?

I used to flinch when I'd read Capricorns were known for being family-oriented because I grew up in a goddamn snake pit, among a posse of abusers and convicts, so much of my adulthood has involved me working to detangle myself from its inevitable side effects. "Family" was such a bloody word for me for so long, I couldn't imagine a safe version was possible. I'm so lucky to have found my true people, among the misfits and queers and witches of the world. Now, as a mother of five with a massive squad of chosen family members, I understand how family has always been the absolute ruler of my heart's planet. Mi familia over everything. Forever.

Lots of astrology content links food obsession to both Taurus and Cancer people. Do you have a favorite recipe? Something that you make especially for people you love?

I opened a bar-restaurant two years ago, and one item that absolutely had to be on our menu was my grandmother's frijoles. It seems like such a simple dish, but its presence holds a great deal of meaning for me. My grandmother was rarely kind to me, so the few sweet memories I have of her really jut out. A ritual of ours would be to open a bag of pinto beans on Friday nights and spread them all over her kitchen table. We'd spend hours carefully weeding out the wonky pinto beans or small rocks we'd find, then we'd soak the beans overnight with seeded jalapeños. The next morning, we'd slow-cook them with onion and garlic and cayenne all day until dinnertime. There's no way to capture that beautiful flavor without going through each one of those steps. I love when visitors from the West Coast come in, because they always ask, "Who's in your kitchen?" and when I come out, this big tatted Chicana bitch with thick-ass eyeliner, they immediately say, "Yes! I knew it!" Because in SoCal, where I grew up, we really do make our beans one specific way. I lost my mind when I discovered that most Mexican joints here on the East Coast use black beans instead of pintos. So many people scrunch their nose at pintos, on some goofy classist shit. I can't relate. Respect the pintos, fools!

One trait many Capricorns share is their propensity toward righteous anger. Righteous as in fueled by an ethos or a moral/collective outrage. When you feel overcome with a powerful emotion like that, how do you channel it in a way that feels good and energetically sustainable to you?

My partner finds my "visceral need for justice" endearing, but, for real, it has definitely damaged my physical and emotional well-being in the past. So much of what I witnessed and/or survived as a child was cruel and unfair, it makes sense that, as an adult, I would fixate on things that weren't right or true or ethical and would then suffer bouts of insomnia and anxiety over them. It was no bueno. Thankfully, I've always had kin looking out for me, reminding me how to stay rooted and of this earth. It took too long, but I've finally learned to pace myself, to try and fix only what's directly in front of me and, most importantly, resist the urge to spiral down rabbit holes of devastating news stories. It's safer and more effective to focus on a couple things at a time. Tackle the easiest thing first, then develop a well-thought strategy for the harder obstacle.

Capricorns are rumored to be traditional, "conservative" people with a lack a flare. Traditional can, however, also be translated into ritualistic—or a people who have respect and reverence for what's sacred. Because almost every Capricorn I know is a witchy person, and you are no exception, I wonder if you might speak to the role of sacred ritual in your life.

I love how ritual helps form my family's identity. It grounds us and demands we remain attentive and present as we draw energy from our ancestors. I love that my children have inherited traditions that will strengthen bonds between them and their own children, long after I am gone. Whether it's everyone gathered in the living room at the same time each weeknight to watch Jeopardy! or a line of kids at the dinner table, polishing silverware for a dinner party, we know how to be in community with each other, and recognize how these small moments of ritual help build moments much larger than ourselves.

If price were no object and possibilities were limitless, what would be your dream project?

Easy. A national Pink Door Bus Tour. Imagine a brilliant coven of writers rolling into a city, setting up workshops, hex parties, poetry readings and a massive game of Uno.

What fabulous Capricorn things are you up to?

I keep promising myself I'll open my memoir back up and write into it, but my head is too all over the place. Three of my kids are still at home, in school, and in puberty all while I help run a fun little occult bar and restaurant, so that's taking up a lot of my time. HOWEVER, I am collaging again—my first love—and am building a mixed-media poetry show that will, hopefully, be done by spring. It's an homage to a specific block in Santa Ana, California. Mi barrio.

NEXT UP
Astrology
Your February 2023 Horoscope Is A Breath Of Fresh Air
Astrology
Get To Know Aquarius, The Certified Freak Of The Zodiac
Astrology
January 2023’s New Moon In Aquarius Is All About The Big Picture
Astrology
Your Natal Mercury Placement In Astrology, Explained