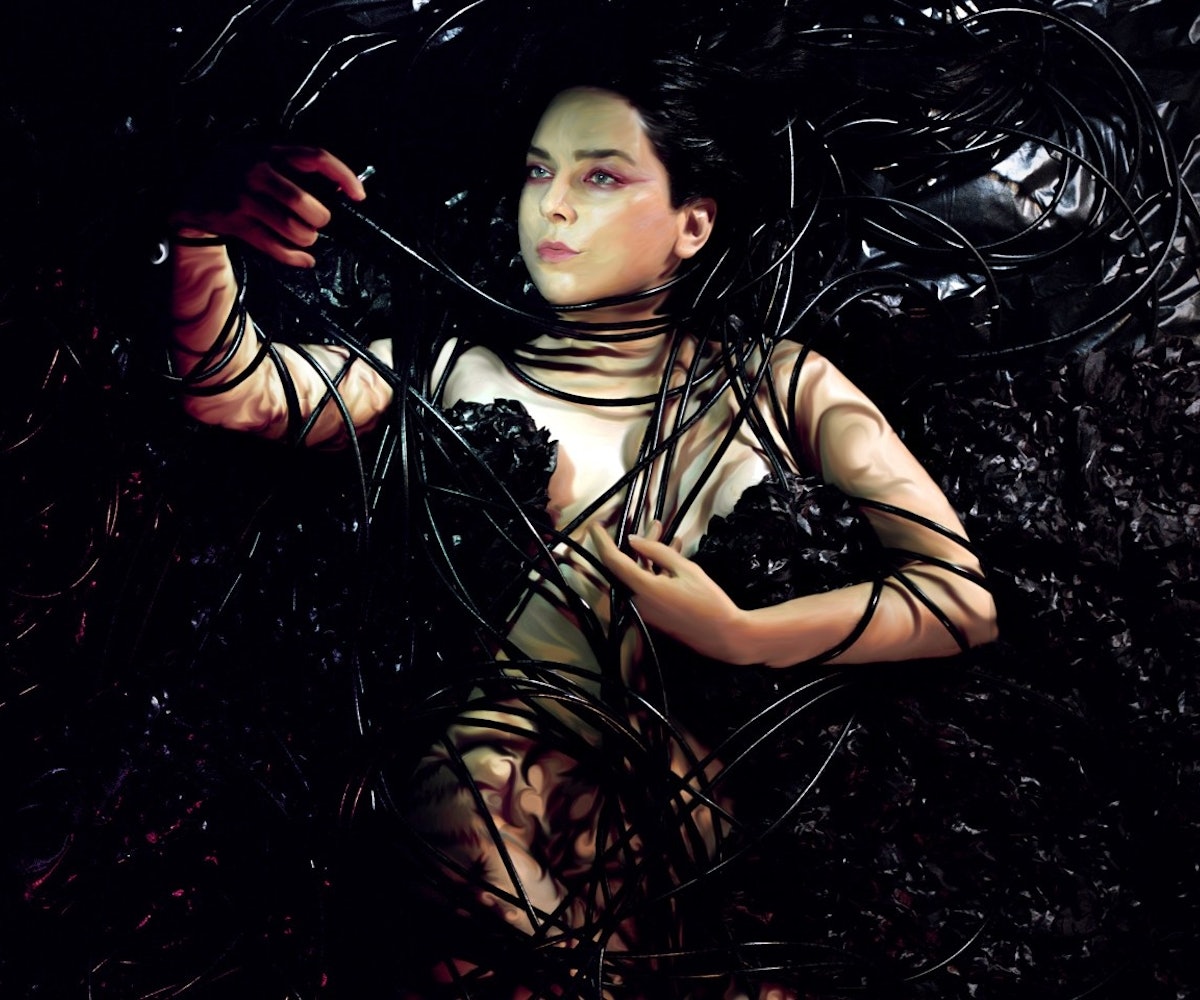 Los Angeles' Caila Thompson-Hannant has lived several lives as a musician. She recorded under the name of Mozart's Sister in the early 2010s and worked on SOPHIE's Grammy-nominated album, Oil of Every Pearl's Un-Insides, as herself. Her latest endeavor is under the gleaming pop outfit Cecile Believe, the debut album for which is called Made In Heaven, dropping on May 8. On Tuesday, she shares her second single for the project, "Pick Up The Phone," and both the song and the video are premiering exclusively here. It's a pulsing, flickering dance number that you won't be getting out of your head anytime soon.

Much like the rest of her album, "Pick Up The Phone" was written as Believe was getting sober. Laced in its anxious lyrics ("Answer please/ I need a hero one the other side of the line/ You might save my life tonight") is a stark look at how alcohol had taken over her life, and the desperation to wrangle herself free is mirrored in the track's propelling production. In the Zoe Chait-directed video, clips of Believe dancing in her room are spliced with shots of her stumbling home in the dark.

Of the track, Believe writes via email: "A friend showed me this sample of a woman singing 'pick up the phone' through a phone receiver, like it was a voice mail. It was super infectious and it swirled around my head for a couple months. I was about 4 months sober when another friend told me a story about a desperate alcohol-fueled night of calling number after number waiting for someone to pick up. The two things clicked in my head and I wrote the song in an afternoon. Infused with its share of desperation this song is a semi-lucid cry for help. As if waking from a cocktail-induced dream (nightmare) the intro voice begins to sing inaudible words, like an alarm bell ringing for some reason you can't remember. Slowly the words fade into focus to reveal the urgent action begged to be obeyed. Pick Up The Phone!"

Hear the song below, and read on to learn more about Believe.

You're a close collaborator of SOPHIE's. How did you guys meet?

We actually met at SXSW. She had heard my first EP as Mozart's Sister and came to my show. I had never heard of her music, I think she only had one song out at that point but she invited me to a club night she played that week and I was completely blown away. We kept in touch and eventually started collaborating. Before I started making music with SOPHIE I hadn't collaborated in a "computer-music" way. I had been in bands but I didn't have experience making songs with someone else and a laptop (or two). When I discovered it I was like, oooh this is what I want to do.

Made In Heaven is your first project as Cecile Believe, but is by no means an introduction. What kind of identity does Cecile Believe have that's different from your past albums as Mozart's Sister?

Mozart's Sister was an underdog hero, a rebellious spirit. I wanted to leave the identity of the secret talent behind and step into a position of trust and confidence in what I do. I'm not religious but I did choose the word Believe intentionally. To me, it's a clear affirmation that I can move through life with grace and passion even if I can't see the whole picture. I don't know what my future holds; I have to believe in the unknown keeping me safe. This trust fundamental to my artistic practice. Without it, I can cannibalize my own creative spirit.

I find pop in general to be forward-thinking. Some of the best innovation is happening in pop, but pop is also such a catch-all term and people (myself included) love to sub-categorize. Often musicians describe their own music differently from listeners, and I never really understood the term "forward-thinking" with regards to my own work. I see my new EP Made In Heaven as "post-genre" pop music. I have been influenced by all musical styles. I'm attracted to ~vibes~ more than genres. Like, what is the flow between Imogene Heap, Guided By Voices, Young Thug, Enya, etc? We are all getting so creative with playlists and mixes, why not expand that idea into an album?

You wrote "Pick Up The Phone" in the midst of finding sobriety. Has being sober changed your creative process?

Sobriety has changed my life dramatically, which in turn changes my writing. I actually ended up making 90 percent of the EP after getting sober, which I wasn't expecting. I had almost finished another album but ended up scrapping the old material and writing from this new perspective. For me, substances were numbing my emotions so when I stopped, it was a release, often a very painful release. But it did make writing music feel more real. I think I was able to actually ask difficult questions and be honest about what I really wanted to say.

Honestly, I'm a singles person! I get stuck on a single song for months sometimes. But I did recently lay in bed and listen to Arca's new hour-long single "@@@@@." I think the format of an album-length single is bold. At first, I was kind of pissed off at it for being so long, but that's definitely a good thing! It makes sense after hearing it and I feel grateful for the music she makes.