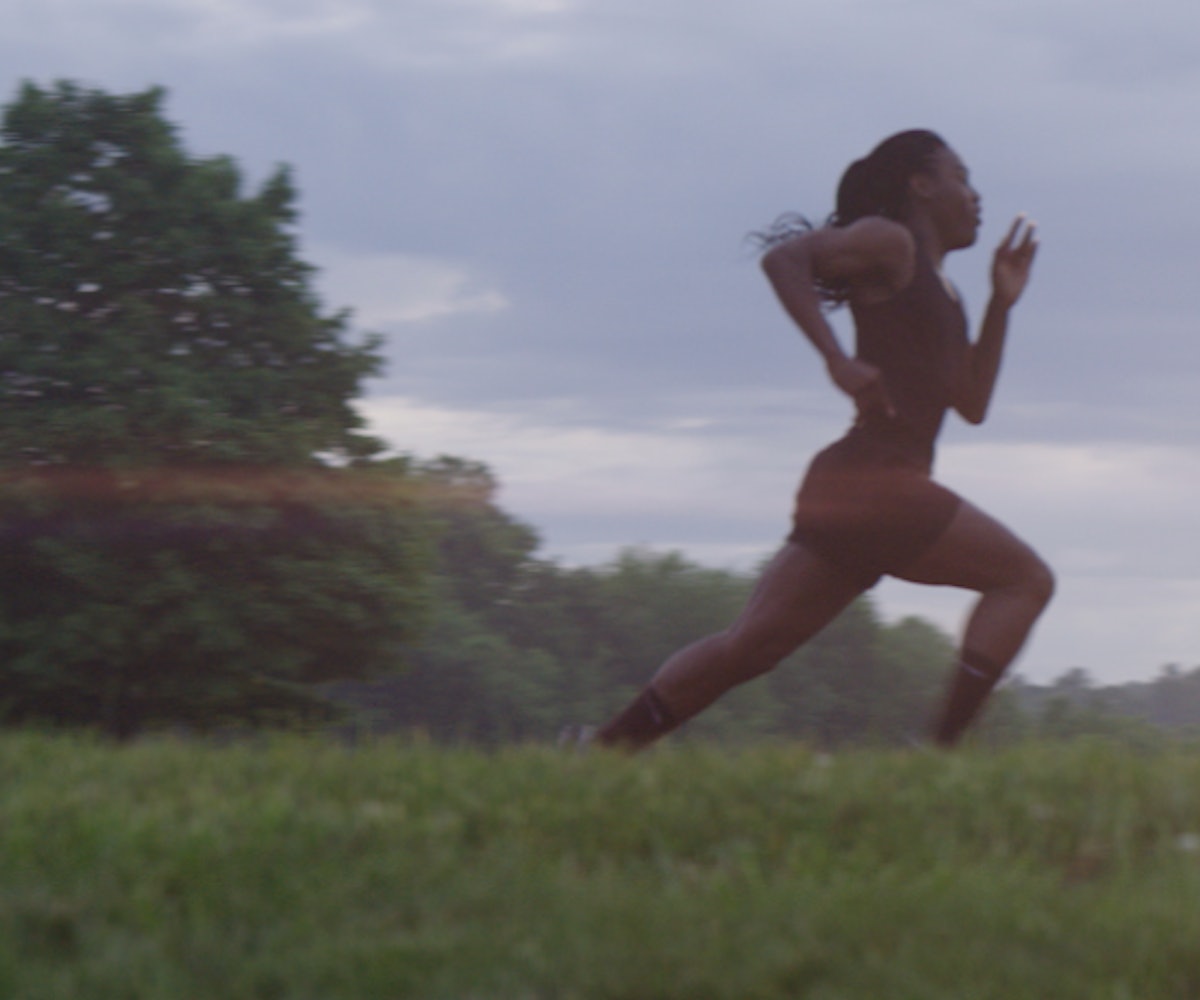 On May 1, Caster Semenya, the South African 800m two-time Olympic gold medalist, lost an appeal to the Court of Arbitration of Sport (CAS) challenging the guidelines set forth by the International Association of Athletics Federations (IAAF) that had ruled the cisgender female runner would have to take hormones to lower her naturally occurring testosterone levels in order to compete in her races at the Olympics and other international competitions. The ruling claims that "such discrimination is a necessary, reasonable and proportionate means of achieving the IAAF's aim of preserving the integrity of female athletics."

Five days before this ruling—that would affect not only Semenya, but elite athletes everywhere, and particularly trans and female athletes of color—the documentary Changing the Game, which follows the lives of three trans student athletes, premiered at the 2019 Tribeca Film Festival.

The documentary weaves together the stories of Mack Beggs, the wrestler who made headlines when he won the girls' Texas state wrestling championship (twice); Andraya Yearwood, a Connecticut track star; and Sarah Rose Huckman, a skier and policymaker in New Hampshire, in a stunningly visceral production whose underrepresented narrative is only further supported by Emmy-award winning Michael Barnett's direction and crew.

The subsuming sound and action-packed edits create the container for the audience to completely surrender into the lives of these athletes who are not only navigating high school in their bodies and identities but having to do so in the global amphitheater of the press and competitive sports.

Throughout the film, we watch full stadiums boo Mack because of policies that require him to compete on the team that matches his birth certificate, while Andraya and Sarah Rose are booed competing on the teams that match their gender identity. Now, the highest global governing body of athletics is bullying (rather, forcing) Caster, a cis woman, to undergo a medically unnecessary physical intervention to lower her naturally occurring hormone levels because it's deemed an "unfair advantage" in female athletics—meanwhile an athlete like Michael Phelps is only celebrated for his physiological advantage in male athletics. It's repeatedly clear that anyone who isn't a cis man can't win control over their own identities and bodies in the eyes of society, government, or athletics—especially if you're black or brown, queer, or not from the global north.

This is never more clear than as we see that "Sport's Supreme Court" has ruled that it's ultimately "unfair" for Caster, a black cis woman, to compete against other cis women just because her hormone levels are different, and meanwhile angry parents shout and yell at high school athlete Andraya, a black trans woman, for the same reason.

"Would it be fair to tell somebody that you have all of the rights and privileges of a given gender except in this one situation?" asks Brian Calhoun, Andraya's track coach, in the last moments of the film. "Either you do or you don't."

Alex Schmider, the executive producer of Changing the Game, spoke with NYLON recently about the film, the IAAF ruling, and the dangers of discrimination based on gender.

How have audiences responded to Changing the Game? What conversations have you seen ignited by the screenings?

It's been so meaningful that people are coming out to see the film—we sold out our premiere screenings at Tribeca. The audience response has been overwhelming. People have been engaging with us in really deep dialogue after the film about fairness and discrimination, and reinforcing how incredible Mack, Andraya, and Sarah Rose are in spite of the rampant bullying and discrimination they face.

The documentary has been slotted as one of the strongest films premiering at this year's 2019 Tribeca Film Festival, but there's hardly been any press coverage compared to other films at this year's festival. Why do you think that is?

We feel very proud of the film and of Tribeca's active inclusion of underrepresented stories this year in the festival. Something I've observed working in LGBTQ media advocacy for almost five years is that often LGBTQ critics and outlets are not given access to preview LGBTQ films, so those voices are relegated to later coverage, affecting a film's ultimate reach and trajectory. Our team has worked very hard to ensure that any LGBTQ media interested in seeing the film can and will.

The other, however, is that some critics reviewing films may not be fluent in what respectful and authentic LGBTQ media representation looks like, especially for trans people, and so therefore may instinctively and inappropriately laud some—as in the case of last year's Cannes festival darling, Girl—or entirely avoid others, because it would be wading into territory unfamiliar to them. This, to me, is really unfortunate and counterproductive. We need critics who are equipped with the knowledge of this community (something GLAAD can help with) and who are unafraid to be critical when it's due, while simultaneously being comfortable covering the complexity of stories and evaluating them on their quality.

In the film, Sarah's father shares that he'd be disappointed to find out if his daughter was holding herself back in competitions so that she might be accepted more easily. Mack Beggs is a Texas state wrestling champion, and Andraya Yearwood is a Connecticut state track champion. Do you think there would be equal outrage if they weren't succeeding and competing at the level they're at?

I think this is a really important and interesting question. There are hundreds, if not thousands, of transgender high school athletes competing across the country in sports on the teams that align with their gender. It's no wonder that it's really only when trans athletes start succeeding that this activates such strong and hateful backlash. Both Mack and Andraya were thrust into the media spotlight because of this paradigm, and thus become the only examples of trans athletes people know. What Sarah Rose says in the film about backing off in skiing, so as not to draw additional attention to herself or have people question the integrity of her accomplishment, is a sad reality for trans people in many fields and illustrates how backwards it is that some people feel they must choose between being themselves and striving to do their best. It's a choice no one should have to make.

Race and gender can never truly be separated, as they are both colonial constructs meant to control and oppress bodies. How did you see race and gender intersecting in the lives of Andraya, Mack, and Sarah, if at all?

I think we're seeing this play out in real-time with the IAAF ruling requiring South African track star, Caster Semenya, who has higher levels of testosterone, to physically alter her body in order to continue competing. It is because she is winning that the spotlight has been aimed directly and harshly on her. This compounded with sexism, racism, homophobia, and gender stereotypes has made this such an ugly show of willful ignorance and exertion of upheld institutional power structures.

It's important to note that Semenya is not transgender, though many people have been quick to try to identify her as such. The athletic governing body is attempting to define and regulate what it means to be a woman in an unrealistically narrow, restrictive, and harmful way. I say "unrealistically" because the argument about any physiological differences is to discount the diversity of all bodies.

What's so dangerous is that many people who support this invasive instruction to physically alter a body to conform to societal expectations of what it means to be a woman or any gender don't realize that they are also ceding their own agency and autonomy over their own.

One of the most moving segments of the film is watching Chelsea, a cisgender female wrestler, prepare to compete against Mack at States. The camera follows her wildly vigorous workouts moving tires and lifting ropes, the sweat pooling on her shoulders. She unblinkingly stares at the camera and says, "I know he's a boy, because he said so... Do you really honestly think someone would change their entire gender just to win State? You have a whole year to get ready, because you've got to beat Mack." Why was it so important to make the decision to highlight Chelsea's voice in the film?

Chelsea is such a strong character in the film, and is so essential not only in telling Mack's story but also sharing her own. They both have such respect for each other as athletes and competitors. It's a very simple statement she makes: She knows who she is and she respects Mack for who he is. It's modeling we need to see more of.

The subjects in the film note over and over how it's adults that are bullying them, not their peers. Is there a sliver of hope to be found in this statement?

I think the next generation is leading the way in dismantling gender as a constrictive construct and really championing self-definition and self-determination. Ultimately, I believe 100 percent acceptance will be achieved when each and every person is comfortable with themselves because then no one will feel threatened by anyone else about who they are and how they are.

What do you hope anyone who sees Changing the Game gains from the film?

Because only 84 percent of people say they personally know someone who's transgender, I hope the film gives audiences the chance to get to know Mack, Andraya, and Sarah Rose on a personal level. Yes, they are transgender, but they are also student athletes growing up, going to school, getting into relationships, playing in sports, and publicly participating in society. They are sons and daughters, siblings, sports team members. They are themselves, and belong just as much as anyone else.

Sarah Rose talks about how the New Hampshire state motto is "live free or die." Hopefully, people will see the film in all states and feel freer to live—whoever they are.