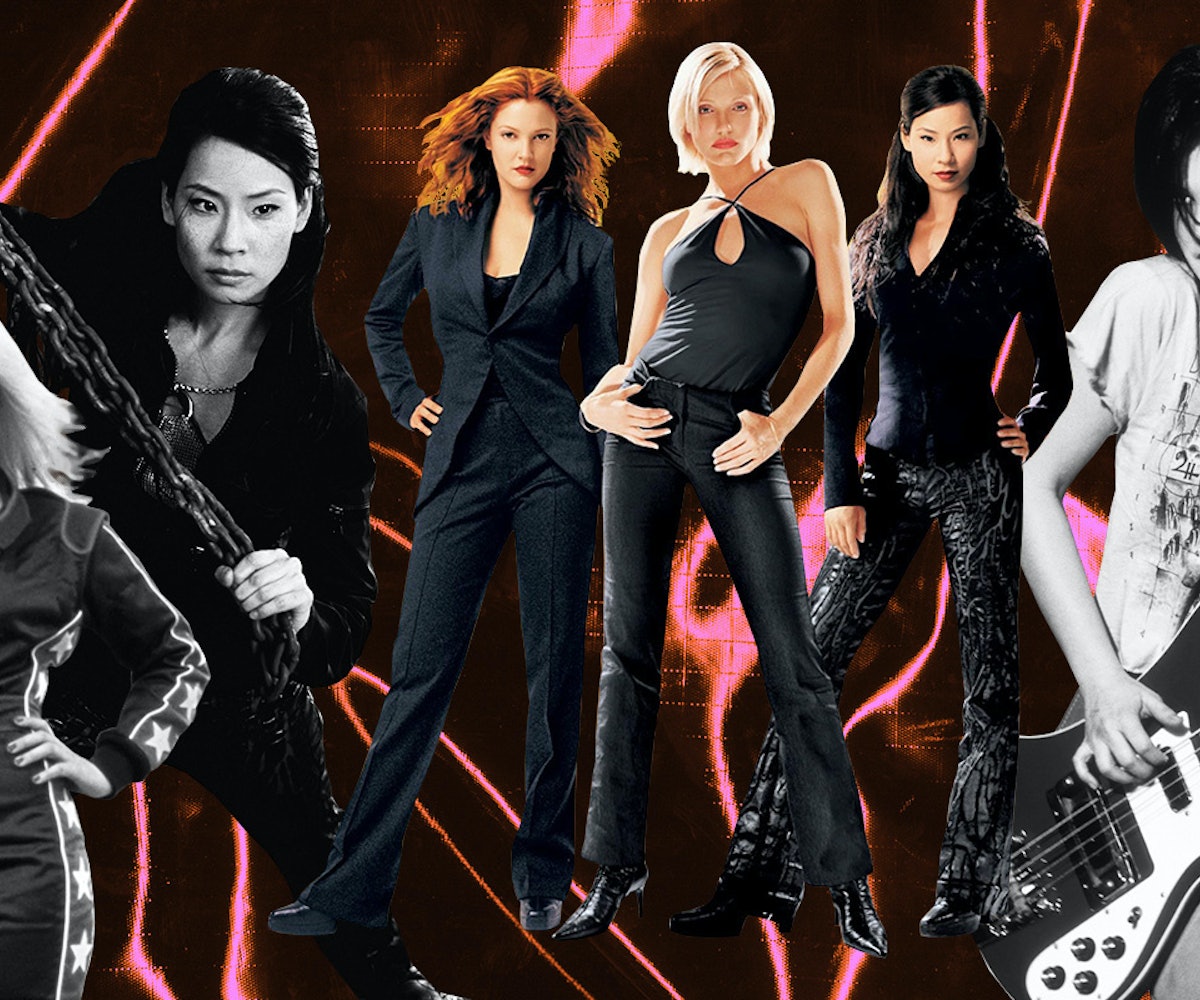 The '70s camp-classic television series Charlie's Angels has had a surprisingly long afterlife. The show was rebooted as a successful film, directed by McG and starring Drew Barrymore, Lucy Liu, and Cameron Diaz, in 2000, and had a sequel three years later. The early aughts seem like a simpler time, and nearly 20 (!) years after Barrymore, Liu, and Diaz first kicked ass in style, yet another Charlie's Angels remakeis coming to theaters — this time with Elizabeth Banks in the director's seat and Kristen Stewart, Naomi Scott, and Ella Balinska as the trio. While the upcoming Charlie's Angels is the latest example of Hollywood's unending thirst for remakes, it will be interesting to see how the new version differs from the earlier films, particularly where it comes to technology, feminism, and fashion. While the 2000 Charlie's Angels may not be a great film, it's filled with fun and memorable looks worn with a delightfully sassy attitude.

The film brought Charlie's Angels into the 21st century with pop feminism reminiscent of the Spice Girls' cry for "Girl power," elaborate stunts, and a trio of famous faces. Each Angel fits a template: Natalie (Diaz) is awkward and blonde, Dylan (Barrymore) is tough and redheaded, and Alex (Liu) is smart and brunette. Together, they make a dynamic team, and as in the original show, their work gives them excuses to wear lots of over-the-top costumes. The costumes may be part of "going undercover," but they're always conspicuous, and walk the line between appealing to girls looking for cool heroines and guys hoping to see scantily clad babes. Some of the outfits, like belly dancing or Japanese-inspired looks donned by the trio, feel too much like vaguely culturally appropriative sexy Halloween costumes — the film isn't entirely successful at avoiding clichés. For the most part, though, the fashion makes for a playful statement that's enjoyable to revisit two decades later.

The Angels' wardrobes change from one day to the next — such is the nature of their work. Black catsuits and heels make for a sleek silhouette that shows off fancy stunt moves.

The black outfits, shiny and sexy though they may be, are actually some of their subtler group costumes. Depending on the occasion, they may dress in red carpet-ready gowns or, in one of the silliest moments, skimpy German beer maiden type costumes. A racing track jumpsuit in red, white, and blue paired with tinted aviator sunglasses has an all-American '70s swagger that seems like it would've fit right in on the original show. Where do these perfectly designed costumes for the most disparate of sartorial occasions come from? Do the Angels have a custom tailor? Is dressing up actually the biggest part of their job? These are just a few of the questions Charlie's Angels winks at but never answers.

Early on, Natalie dances in her underwear in a cute scene that's classic male fantasy sprinkled with a touch of self-conscious nerdiness. Her underwear appears to be from the boy's section, with its cut and image of Spiderman on the back. The unsexiness of the underwear is meant to show that she's not like all those other girls who might choose something more lacey and revealing. Such nerdy branding is a little cliché at this point, but back in 2000 it was a bit more novel.

Of course, she dresses more conventionally for a night out. In another dance scene, in public this time, she wears a red one-shoulder crop top and tight pants. While the combo reads early aughts, the disco-ready cut of the top nods to the film's '70s roots, as well as shows that Natalie is more confident than she initially seemed.

Even when the Angels lounge beachside at the end of the film, they're in colorful, expertly styled harmony. Every occasion is an excuse to dress up, and even if dressing in exaggerated styles is part of their work, it seems like something they have fun with. The message that you can look stylish while being tough isn't exactly original, but it's of a piece with media of the time like Buffy the Vampire Slayer and Alias while also updating reference points from the oft-revisited era of women's lib. In the end credits, the Angels play in a band while wearing rock-inspired costumes, in a tableau reminiscent of Josie and the Pussycats, released the next year. The irreverent girly aesthetic of the time is instantly recognizable.