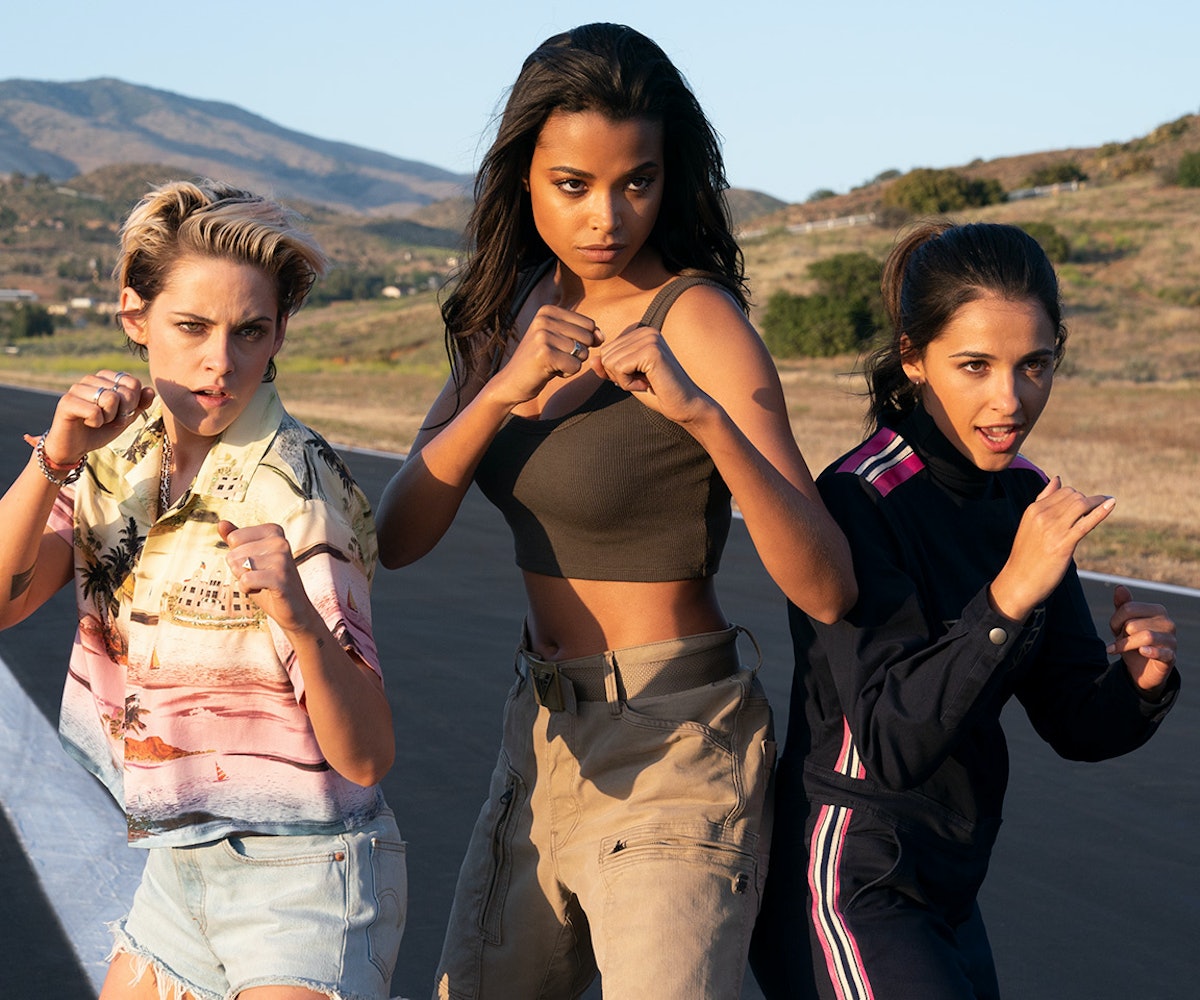 The 2019 reboot of Charlie's Angels begins its first scene with a close-up of Kristen Stewart's face. As she discusses gender roles over dinner with a male companion, who radiates cockiness from his offscreen face, the camera stays fixed on her face as she speaks and reacts, capturing little gestures as she seemingly decides, in the moment, how playful, aggressive, or accepting to be of this guy's (bad) opinions about whether men and women have natural roles to play. The dialogue, even in the realm of flirting, is a muddle. But there is something powerful about the focus on Stewart's expressive visage.

The focus doesn't last, cutting away from Stewart's face in favor of traditional wider shots and cutting back-and-forth between the two actors. As expected, the scene flips as Stewart's cover is revealed, and she beats the tar out of the bad guy she's been seducing as a distraction. She's Sabina Wilson, of the Townsend Agency, a private security/detective firm that has expanded from its humble '70s-TV-show beginnings and '00s-film-franchise continuance to become a global operation, with multiple handlers (all still called Bosley, now a rank rather than a man) and plenty of ass-kicking agents. Sabina is one; the steely, severe Jane Kano (Ella Balinska) is another. The trios of earlier Charlie's Angels iteration don't appear to be agency default — Sabina and Jane know each other, but not well — but the movie moves them in this direction with the introduction of whistleblower and tech expert Elena Houghlin (Naomi Scott).

The previous Charlie's Angels films were all-star affairs, teaming up Cameron Diaz, Drew Barrymore, and Lucy Liu, all more or less at career peaks. This one favors less familiar faces — with the exception of Stewart, who has technically starred in billions of dollars' worth of hits. For heavy movie-watchers, this is easy to forget, because Stewart has appeared in just a handful of wide releases since the Twilight series ended in 2012; more casual fans probably still think of her as Bella Swan, the mostly passive and drippy heroine who sublimated her personality for the sake of an equally dull vampire beau. It's been a thrill to see Stewart redirect her fidgety charisma and emotional openness into better-written parts over these last years; she's given standout supporting performances in the likes of Certain Women or Clouds of Sils Maria, and terrific showcase work in Personal Shopper and Camp X-Ray. She re-enters the world of mainstream would-be blockbusters as one of the most distinctive actors of her generation, and Banks opening on her face feels like a reference to the stripped-down indie aesthetic of her recent work.

Technically, the whole movie is stripped-down; it's less elaborately expensive and cartoonish than the color-blasted, electric-green-grass music-video sensibility of the two McG movies with Diaz, Barrymore, and Liu. But Stewart has clearly shown up to goof around, and she plays Sabina as kind of a Ryan Reynolds type — motormouthed and occasionally whimsical. Beyond the action-wisecracker lineage, her role also feels like a fantasy version of Stewart's talk show-guest persona, with her intelligence and enthusiasm powering past her awkwardness. That awkwardness isn't banished entirely, because Sabina's jokes and bits don't often land. But her vibe is just right for the series' fake-ditz insouciance. I have no idea if Stewart grew up on those earlier Charlie's Angels movies, or has even seen them, but she seems to instinctively understand what's charming about their playful star power.

The movie around her, though, doesn't quite get it. Replicate the alchemy of a mercenary McG production shouldn't be that difficult. But Charlie's Angels '19 is less surefooted than Stewart's charming loopiness — or Scott's nerdy naiveté, or Balinska's no-nonsense asskickery. Writer-director-costar Elizabeth Banks has appeared in lots of comedies, and her directorial debut was Pitch Perfect 2, and sometimes she aims for knowing self-parody or comic digressions. Some are verbal (confusion over Banks' Bosley-referencing Birdman of Alcatraz) and some are visual (a static shot composed for maximum comic surprise when Scott pops into the frame), and none of them have the energy of, say, the title sequence of the earlier films, where the stars were placed in a fake '70s-style reel of various unseen, context-light adventures.

What Banks comes up with in its place should be a parody, but isn't: a montage of stock footage depicting women and girls around the world engaged in positivity, the kind of cheesy empowerment that belongs in an ad for a political campaign, or possibly bottled water. Her script is littered with pop-feminist grievances proudly calling attention to themselves: Scott alone gets mansplained, told to smile more, and has credit stolen at work (credit for a MacGuffin tech device that has the potential to be weaponized, fueling the movie's various sneak-arounds and double-crosses, but still). Obviously, there's nothing wrong with bringing real-world challenges into Charlie's Angels, but there's something moneyed and opportunistic about the movie's vaguely Lean In worldview. The Angels have a "saint" attaché who handles health and wellness, probably meant as kind of a goof on spy-movie gadget guys but not much funnier than a clichéd treat-yourself newsletter. (Ladies be loving their wine and cheese!)

The MacGuffin-chasing becomes a respite from the sometimes-misjudged tone, even if the plot is simultaneously simple and overbusy, with multiple celebrity cameos filling out the roster of worldwide Bosleys (Patrick Stewart is on hand, and fairly delightful), and even more popping up for some mid-credits scenes. What keeps Charlie's Angels watchable is, as ever, the trio of women posing at its center: Stewart, Scott, and even the stoic Balinska are just plain fun to watch, and the loose formula of disguises, kicks, and chases remains durable. The ability of this movie to empower women everywhere may be overblown, but the production isn't; it's a fleet couple of hours that doesn't resort to shit-just-got-real bombast. Though Stewart isn't positioned as the team leader, she feels like one in spirit, reminding everyone around her to loosen up — and that is reason alone to see the movie.

Charlie's Angels is out in theatres now.