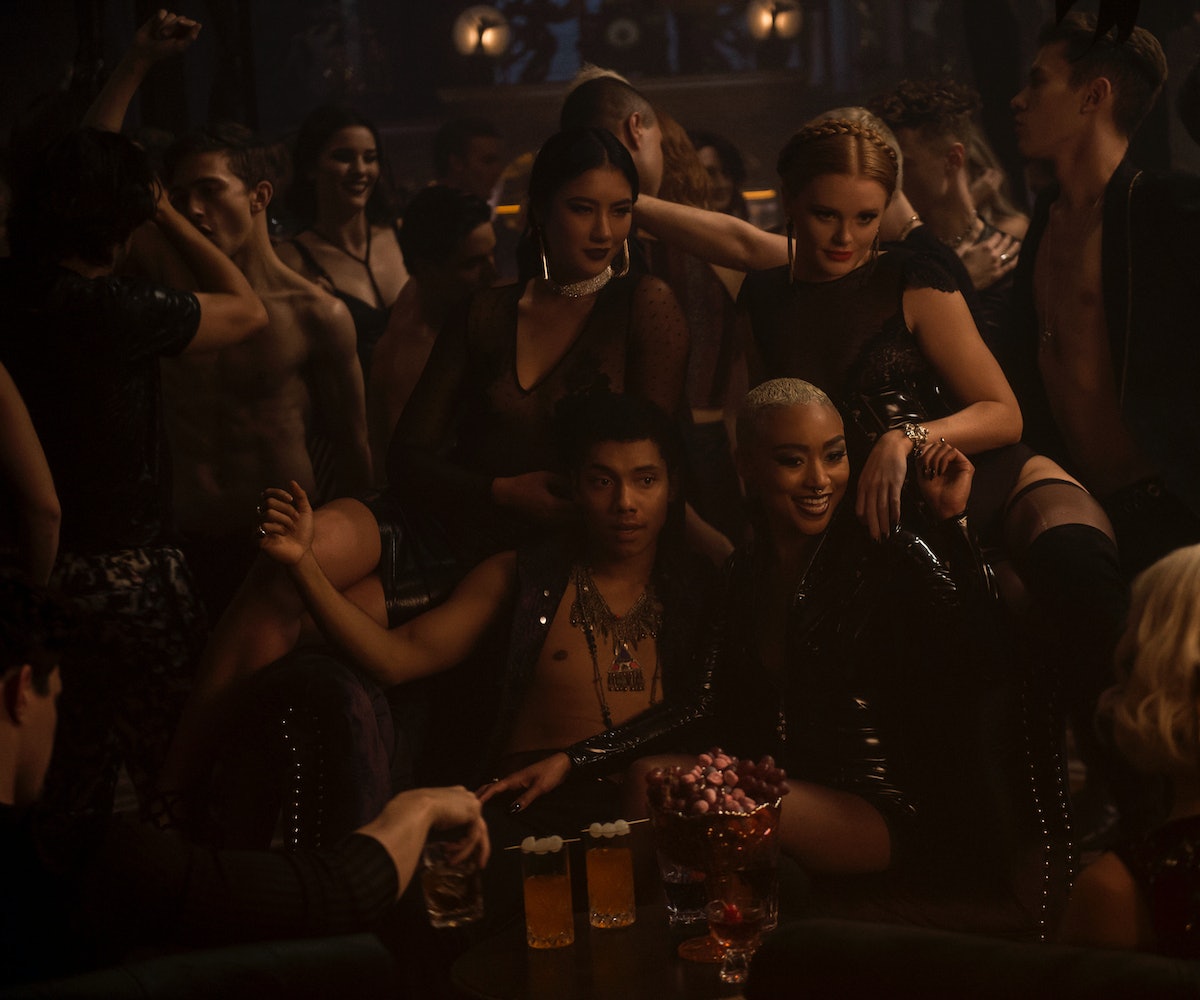 I was late to the Chilling Adventures of Sabrina party. While everyone else gobbled the show up in the weeks after its October 2018 release, I finally got on board in January during the holiday break. What turned me onto it was noticing how many of my queer friends were raving about it. I'm pretty easily queer-baited, and wanted to see if the Netflix original series was as good as they made it seem. More importantly, I wanted to understand why it had become the latest staple in queer TV despite the fact that, at first glance, it was centered around a blonde, white witch who had boy troubles. But on closer inspection, CAOS made clear that it was one of the most sexually fluid shows on television.

It actually doesn't take too close of an inspection to quickly see that Sabrina Spellman (Kiernan Shipka) is surrounded by queer friends and relatives, like her queer cousin, Ambrose (Chance Perdomo), and transgender friend, Theo (Lachlan Watson), who give the show different dimensions and depth than it would otherwise have. But it takes more than a couple of openly LGBTQ characters to get queer people in the real world to identify so heavily with a show.

What Chilling Adventures of Sabrina does so well is demonstrate that queer people are not a monolith, and that their experiences are, more often than not, intersectional. Characters like Prudence (Tati Gabrielle) and Ambrose, who are both Black, are prime examples of this. They were both mentioned prominently when I talked with queer CAOS fans about the show. Marvin Dumas told me about those characters, "They show the fabulousness of being people of color and queer, while also serving fashions, style, and wit."

Then there is Sabrina's friend Roz (Jaz Sinclair), who is also Black and who is going blind thanks to a hereditary curse. As her literal sense of sight goes, Roz gains a gift of supernatural sight called "the cunning," through which she sees visions. Roz learns about this gift through her grandmother, who reveals that generations of women in their family have had the cunning thanks to a curse put on their family by a witch. "So many black girls learn about their gifts from their elders, it was relatable," said Dee Maurice, explaining to me what appealed to her about the show. Roz's gift is a definite nod to the ancestral inheritance of both resilience and struggle that defines Black womanhood. As Dumas noted, Chilling Adventures of Sabrina shows "how Black people are the curators of culture and cool, but also gives them depth and actual backstories," even in symbolic ways.

Symbolism is essential when discussing the queer undertones of Chilling Adventures of Sabrina because witch culture, in general, is one big allegory for queerness. Tori Mosby told me that because "Sabrina is aggressively hetero," she "never looked at the show with any kind of queer light on it." Instead she saw the "witchy vibes" as the biggest pull. The alterity of witches and warlocks as mystical, and sometimes feared, outsiders is something that resonates with a lot of LGBTQ people in a culture with such a deep history of homophobia. Finding strength and identity in a community of other people like you—a coven of you will—is vital. Additionally, the stress of living a double life or having to hide parts of yourself, even from people you love, has made Sabrina a more relatable character.

Austin Alford shared this perspective: "Being a witch is taboo much like being queer was/is, so we can relate to the double life of Sabrina. When she goes to the witch academy and is amongst her own, it's like the moment we make our first real queer friends, but still hold on to our old lives. We have the sense of family and comfort, even if the family isn't supportive."

Another strong link between CAOS and queer people is their dual complicated relationships with religion. In CAOS, Sabrina is raised to believe in the Satanic Church of Night, but she struggles to reconcile its teachings with her own thoughts and feelings. NYLON staff writer Bailey Calfee compared that to what it's like to grow up queer in a Christian family: "Sabrina is trying to figure out her own moral compass and realizing that it may not line up with the values she's been raised to believe—values that her aunts have passed on to her, which are rooted in religion."

Another way to look at it, though, is to note the ways that CAOS flips off traditional expressions of Christianity. This wasn't lost on Jose Richard Aviles, who told me, "The Church of Night being the complete opposite of 'the church' as an institution could be interpreted as a bigger metaphor for queerness: the complete opposite of the institution, heterosexuality." For many queer folks, the traditional church still represents condemnation, rejection, trauma, and oppression, so diving into a world that perverts some of those principles is extremely satisfying.

Chilling Adventures of Sabrina is proof that creative storytelling that resonates with queer people doesn't always have to be niche. True diversity is easy to come by when you're willing to tell multiple stories from different perspectives. LGBTQ audiences are willing to look past Sabrina sometimes being a "pain in the ass" (Maurice's words) to revel in the possibilities that there are spells to combat homophobia, a family that will accept you for who you are, and a tribe of others that is ready to step in if they don't.

NEXT UP
Life
Netflix Dropped A Sneak Peek Of Bridgerton Season 3
Life
Joseph Osmundson on Virology, Monkeypox, Queer Intimacy
Life
Alison Roman Is Getting Her Own Cooking Show
Life
Away’s Second Designer Collection Will Have You Traveling In Style