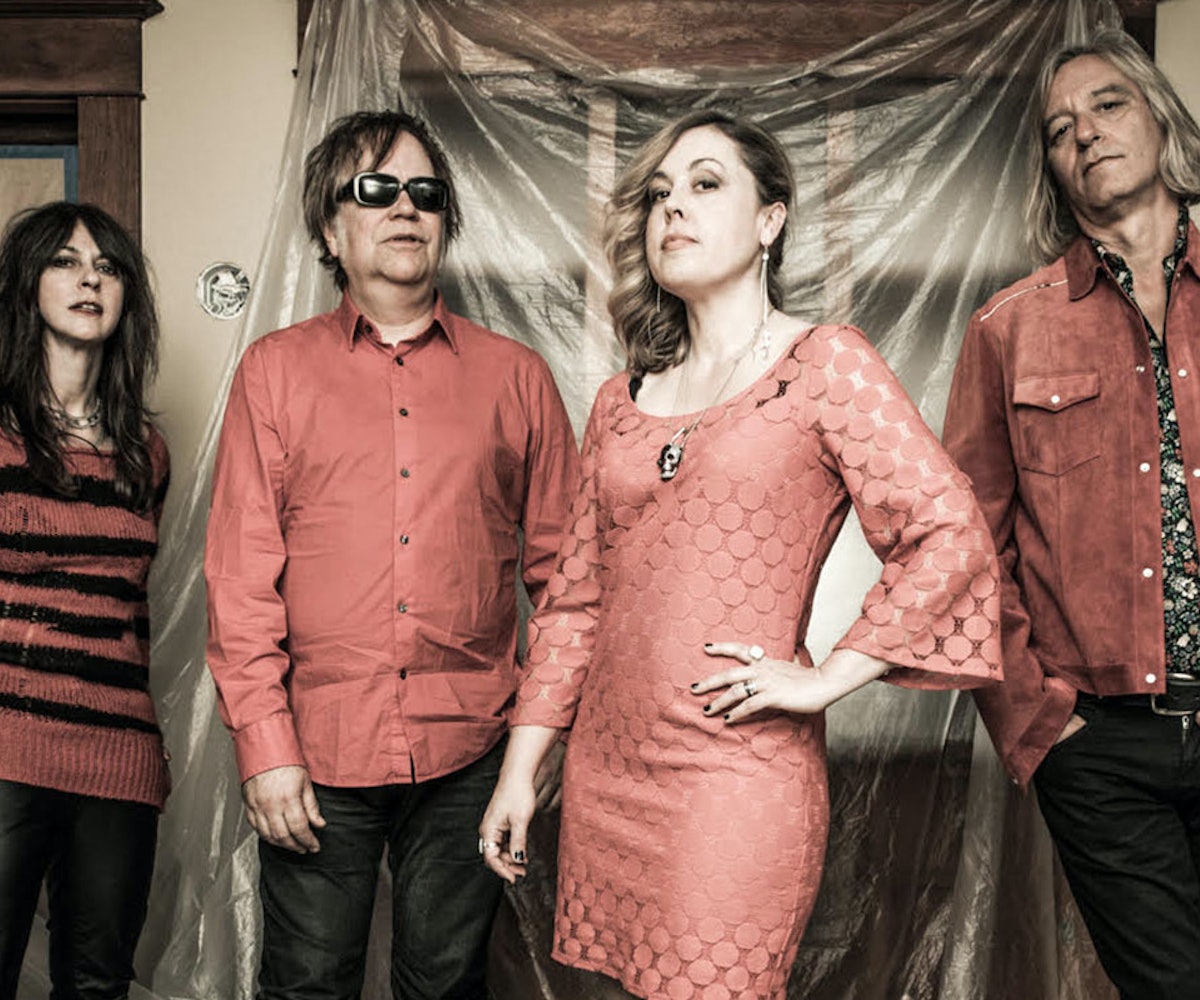 Twenty-five years ago, singers-guitarists Corin Tucker and Carrie Brownstein formed a band in Olympia, Washington, called Sleater-Kinney, kick-starting one of the most enduring and respected careers in indie rock. With the later addition of drummer Janet Weiss, Sleater-Kinney made their mark on the '90s riot grrrl and punk movements with their energetic music and empowering feminist and progressive views. The band's albums, such as Dig Me Out, The Hot Rock, All Hands on the Bad One, and The Woods, have garnered critical acclaim, and their music still sounds timeless and socially relevant now—perhaps even more than ever before. As the noted music critic Ann Powers wrote of the trio in 1997: "The catharsis Sleater-Kinney seek is more than just fun; it's a battle in earnest for the human right to know and possess yourself."

On her own as both a singer and songwriter, Corin Tucker continues to address important issues as she has done with Sleater-Kinney, this time as a member of the alt-rock supergroup Filthy Friends. Consisting of Tucker, Peter Buck (R.E.M.), Scott McCaughey (the Minus 5), Kurt Bloch (Fastbacks), and Linda Pitmon (the Baseball Project, Steve Wynn & The Miracle 3), Filthy Friends are releasing Emerald Valley, the follow-up to their 2017 debut record Invitation. With songs co-written by Tucker and Buck, Emerald Valley tackles a wide range of timely subjects: the environment (the title song, "The Elliott"); toxic politics ("November Man"); the oil industry ("Pipeline"); gentrification ("One Flew East"); and the current border crisis ("Angels"). Amid the electrifying and melodic guitar rock, Emerald Valley makes a quite sobering statement on where we are today as a country, recorded by a talented cast of veteran players who are more than the sum of their parts.

Upon the release of their new album, Tucker and her Filthy Friends bandmates are mounting a short North American and European tour throughout the month of May. But it won't end there for Tucker; she and the other members of Sleater-Kinney are readying the release of their new untitled-as-of-yet album, which was produced by St. Vincent. In this new interview with NYLON, Tucker talks about co-writing with Peter Buck, the back stories behind some of Emerald Valley's hard-hitting songs, and Sleater-Kinney's musical and feminist legacy in the #MeToo era.

The turnaround time for this new album was relatively quick. How were you able to put Emerald Valley together, given the band members' busy schedules?

It's kind of been an ongoing process of writing. Some of these songs had been kicking around for a little while. We were planning to do some shows [for Invitation]. And then, unfortunately, Scott [McCaughey] had a stroke [in November 2017], and it was pretty sad and worrisome. Instead, we turned our focus on making another record. It was a positive thing for everybody to focus on. I think that helped galvanize us into finishing it.

The first album came together as an interesting mix of things. Some of the songs were demos that Peter already had. When Peter and I started writing together [for this record], we realized we had something special in terms of our different skills as songwriters. We really wanted to see how much we could push that on making another record, in terms of trying out different styles and different ideas. We wanted to do something that was even more focused with the second record.

Was there anything you wanted to do differently with Emerald Valley compared to Invitation—either musically, lyrically, or a combination of the two?

I think all of the above. I especially wanted to focus on lyrics. I started thinking about what kind of images really come up for me, especially with Peter's guitar-playing. There is so much in terms of change in our landscape, climate, and weather—it's really disturbing to me. As someone who is a total Northwesterner, that naturally came up in this record, and we started writing.

That was one of the last things I brought to the album. We have a lot of slow songs on the record. [I was like,] "Do we need a faster song?" I had this sort of punk rock idea that came together really quickly. I had a lot of different characters or voices on the record that was very older looking back, and I wanted to have a different viewpoint on the record, and so that one was really written from the voice of my younger years, like a teenager living around in Lane County [in Oregon], where I grew up. I used to ride the bus around a lot and think about the place I was living in and what people's lives were like there. Riding the city bus is a really intense way to take that all in. I grew up during the '80s when things were pretty depressed in the Northwest. It was before we had any of the tech companies, and logging was so in decline. People were struggling. That's kind of where that came from. It's weird to me how much of that still applies today.

Another track from Emerald Valley, the politically minded "November Man," could be interpreted as the sequel to the song "Despierta" from the Invitation album. That latter song was a reaction to then-presidential candidate Donald Trump.

It's weird we have all these archetypal characters that seem like they are out of a comic book; "no, they're actually real people." [laughs] That song was Peter's idea. He's totally open to different ways of writing. He said, "I have this idea for a song, 'November Man.' Here are some of the lyrics, this is what it's about." I was like, "Okay, got it." He had this riff, and I was like, "Let's go!" That one almost wrote itself. It's interesting times that we live in. "Despierta" and "November Man"; these are real people that are battling out. It's like a rolling coaster ride.

Another timely song, "Angel," addresses the issue of immigration, especially the separation of families trying to cross the U.S.-Mexico border.

It's heartbreaking. This record is a very natural need to react and reflect on what we're living through. It's too much to process in everyday life, and we can talk about it, and we can protest about it. But to really reflect on something in music and poetry to be deeply satisfying in terms of, I can't even process what we're going through as a society, and what we're permitting to happen. Is there any way we can look back and not be so ashamed? Migrant children were put in camps and separated from their parents? It's really sad where we're at right now.

Other songs such as the title track, "Pipeline," and "The Elliott" reference the dire issues surrounding the environment. Overall, it paints a very bleak perspective about the planet.

It's really a call to people of my generation in some ways, to be like, "Don't you think we could do better than this?" I think young people get it so much better. They're so much more woke, and just on it. Young people are awake to the seriousness and the immediacy of the problems we're facing, and they're ready to do something. We need to hand them the keys.

If you take away the "supergroup" tag for a moment, Filthy Friends sounds like a vibrant up-and-coming band on the scene—except all of you have long musical histories.

That's how it feels to us. I don't think we take for granted the chemistry and different skills that everyone brings. We're all very grateful to make this together, and to be able to pour our heart and soul is actually something that's really satisfying.

As for your main band Sleater-Kinney, their upcoming record was produced by St. Vincent. What was it like working with her?

So great. [She's] just so incredibly daring and adventurous, just pushing us as musicians. She has a remarkable brain. I feel super grateful that we are able to work with her. It really was. It was like, "Oh wow, this person was born to be a producer."

What could fans expect to hear from the new record?

I think that people will be kind of surprised. It's a little bit different than anything we've done. I really think we pushed ourselves to make something truly unique and very emotional.

This year marks the 25th anniversary of Sleater-Kinney's formation. Does it seem like the time went by very quickly?

It really does. Hearing that, you're like, "Oh my god!" But, it couldn't be a better celebration [of] what we've accomplished than the record we just made. I couldn't possibly be more proud of it. In some ways, we've stuck around long enough to see the music industry shift a little bit, so that there are more women in the industry. It's not to say that we don't have a long way to go, but it's nice to see things change, even a little bit.

Now in the age of #MeToo, women have become more empowered to speak up against sexual harassment and gender inequality. In that context. Sleater-Kinney's music feels quite timely now.

I agree. It's always been a way for women to speak their minds and to have a voice. I think it's a really important tool. The music industry is more than ripe for the kind of systemic change that we need.