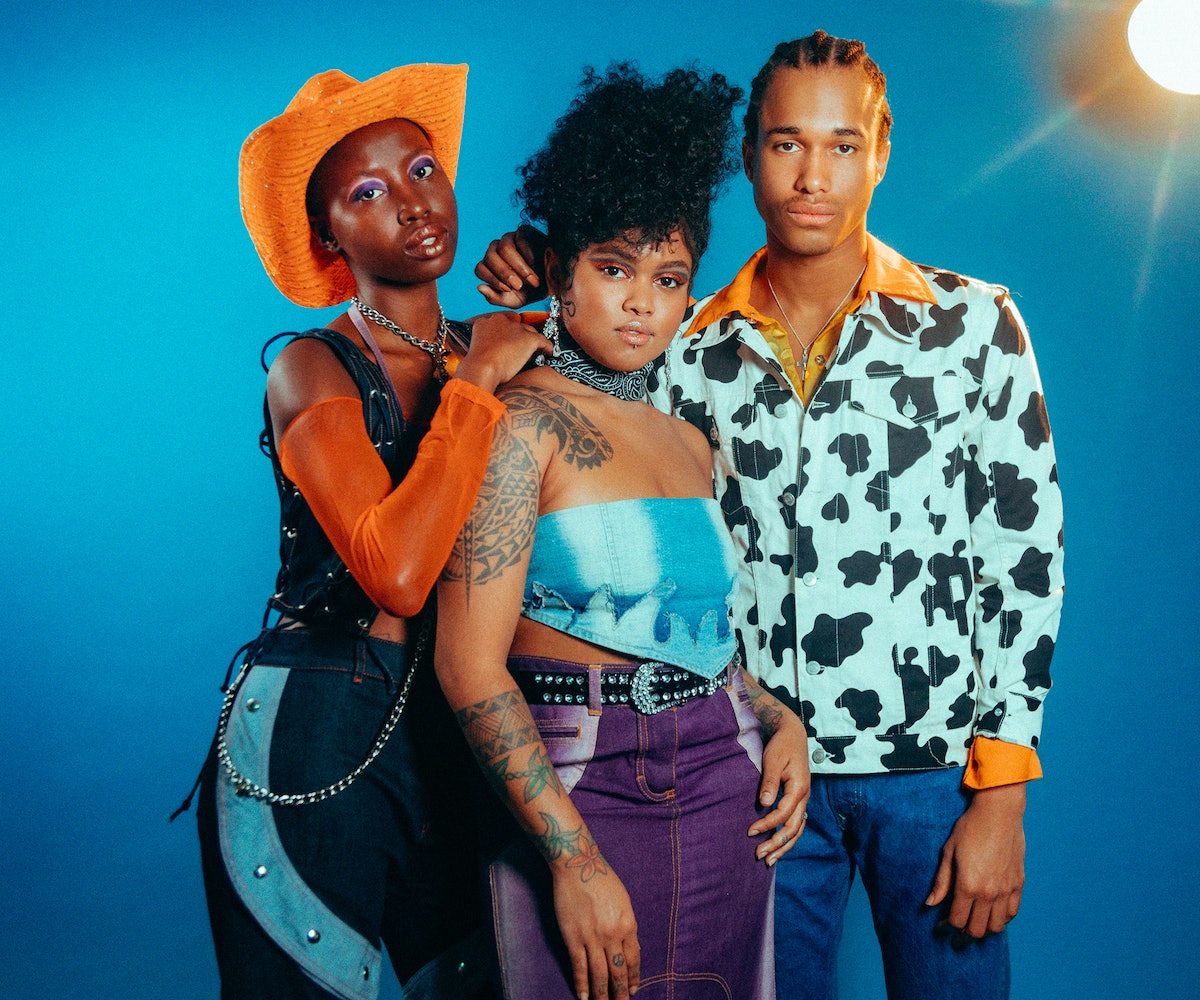 There would be no Compton Cowboys without Mayisha Akbar. In the '80s, she moved her family to Richland Farms, a small rural town in the inner city of Compton, California. Her parents and ancestors were from the South and she "always had a horse/country vibe to her," as her nephew Randy Savvy, current leader of the Compton Cowboys, tells me. Later, when Akbar's son was shot, she was faced with a decision: Leave the city of Compton or stay and try to make a difference. She chose the latter.

"Every time she was on a horse, all the kids would follow her and ask to ride," Savvy shares. "So, she thought, What if I used the horses to attract the kids and, when they come, I can teach them things, tutor them, and mentor them." From there, the Compton Jr. Posse was born. Now, 28 years later, some of the same kids who joined Akbar's organization when they were younger have started their own group with a similar mission: to help young black and brown kids stay out of trouble.

The Compton Cowboys was started in 2017 by a group of 10 friends, each with varying interests. Some compete professionally in rodeo circuits, one is training to do English-style riding (like in the Olympics), one wants to be a cowboy model, another is a cook, while another enjoys managing ranches; Savvy has a professional goal of combining his love of hip-hop with his love of country. "Everybody has different passions and different things that we really care about," Savvy says, "but the common denominator is that we're all are cowboys—we ride and we have our own horses."

On top of keeping kids off the streets, Compton Cowboys help to expose them to something they wouldn't experience otherwise. "Most young, talented black people are in entertainment," Savvy says. "They do music, comedy, or play sports, and it's cool to be on the front lines of doing something different. It shows that our people can do other things than what we normally see our people do.'" But also, just by virtue of seeing black people on horses, be it in a ranch setting or on the streets of Compton (where they often ride, even if it's just to the corner store), it helps to correct a false image of the Old West. "It's a culture that's been swept under the rug and kind of white-washed, if you will, over time through media," Savvy says. "The cowboy image has mostly just been guys, you know, the John Waynes and Clint Eastwoods and those guys. But we're excited to show a more accurate representation of the diversity in the cowboy culture. To be the catalyst for that change."

Despite what Hollywood may have you believe, cowboys of color have been manning the frontier for centuries. According to Smithsonian Magazine, freed African-American slaves sought opportunities to herd cows after the Civil War. Author and scholar William Loren Katz explains that "being a cowboy was one of the few jobs open to men of color who wanted to not serve as elevator operators or delivery boys or other similar occupations." In the 1870s and 1880s, it's said that as many as 25 percent of the 35,000 cowboys in the Old West were black. It's also believed that Bass Reeves, a freed slave who became a deputy U.S. marshal and went on to catch more than 3,000 criminals, was the real-life inspiration for the Lone Ranger.

The revisionist history we've been fed is part of what inspired Amanda Hunt to curate a small but mighty exhibit titled "Black Cowboy" which ran at The Studio Museum in Harlem through April of last year. It included photographs from artists like Deana Lawson and Ron Tarver and showed a range of black cowboys wrangling horses and on city streets trotting by a city mural of Malcolm X. "Black and brown cowboys are as old as the country and were right there alongside all of the fabled white cowboys—John Wayne, Buffalo Bill, etc.—and the native peoples we took land from," Hunt tells us. "'Black Cowboy' was simply meant to give visibility to some of those individuals and communities using contemporary art and images." Not just of black men, who are often at the forefront of Western conversations, but black women and children as well, "perhaps double-expanding a preconception of who gets to be a cowboy," Hunt says.

Brittaney "Britt Brat" Logan started riding a couple years ago after working with a guy who was a "full-out cowboy." "It was strange to see a black man that dressed like Yosemite Sam in Silver Spring, Maryland, let alone being greeted every morning with a 'Yeeehaaw,'" she says. That strange man ended up introducing her to horses and sparking an untapped interest. Sometime later, she joined the Cowgirls of Color after a member dropped out. Logan says she joined because of her love of animals but also for her son. "It was important to keep going knowing my biggest fan was rooting me on."

The Cowgirls of Color is an all-black female rodeo team based in Maryland. Logan says, over the years, the group of ladies has blossomed into more than just a competition-based crew: "We've grown to be a brand who represents women of color who aren't scared to go outside of the realms of what most people deem as normal." And to step into spaces often dominated by white men. "I feel like I'm a positive example of what could be," Logan says. "Before I met the guy at work, a black cowboy or cowgirl was foreign to me. I'd never imagined I would be a part of a world so hidden from others. It's important for me to represent this world that Hollywood doesn't show very often. It's important to let black women know that this horse stuff is possible and available to them as well. Black women do ride, and we ride well!"

Cowboys are trending in fashion right now. Or, rather, the clothes they wear are. Raf Simons has been pushing Western wear on us ever since he started at Calvin Klein. Veronica Beard and Ganni brought us out West with suede fringe and blouses. Other big fashion houses, like Fendi, have declared the cowboy boot the new dad sneaker, while prairie dresses have gone and become "the most provocative thing in fashion right now," according to writer Robin Givhan.

These items have become Instagram bait for some, but have practical uses for actual cowboys. As Savvy explains rather patiently to a cowboy garb newbie like myself, almost every piece of clothing has a purpose. The shape of the boots helps to get your foot in the stirrup and onto the horse more easily. He explains further: "A lot of the way that you direct a horse is through your lower body movement, so the heel is important on the boot because the horse can feel that… it's more effective than like a round-back tennis shoe." The pants or jeans that riders often wear are essentially your seat so, if they're too tight, the rider can't move as freely and you might get a rub or rash. Tight breeches are important for English riding, "because a lot of what they do is off saddle, so they bounce up and down a lot for their posture and their techniques." As for the hat, "a lot of the cowboy stuff is outdoors, so the brim helps you get shade while you're on the horse," he explains. Savvy says that every member of the Compton Cowboys has their own spin on the attire. Some choose to dress more traditionally while others, like himself, inject a "Hollywood hotshot kind of vibe" into their looks.

Perhaps, more than comfort, wearing a uniform lets people know who they are: hard-working, badass cowboys.

Designer Kerby Jean-Raymond was inspired by 19th-century black cowboys for Pyer Moss' Fall 2018 collection (he also included the Cowgirls of Color and Compton Cowboys in his campaign). Titled "American, Also," it was his way of sharing the story of underrepresented groups of Americans, as he said to Teen Vogue in an interview: "I wanted to challenge the narrative for what's typically [considered] 'American' and reverse the ratio of African-American exclusion in the conversation… It's a way to show us in a different, more positive light—it shows us as Americans, too."

That's why groups like the Cowgirls of Color and the Compton Cowboys feel so important. They help to remind us that black people are trailblazers; that we're as much a part of the American DNA as the next person. Nothing screams Americana more than an image of a cowboy after all, and, by the mere fact of existing, black cowboys and cowgirls are not only drilling that message in but redefining and updating what that image looks like.

"Most of the cowboy stuff is usually associated with the Old West and a traditional view of it," Savvy reflects. "You know when something is so old that when you bring it back it becomes new in a way? Because it's so outdated, nobody's doing it, but if you bring it back, it becomes fresh and different from everything else. So, for us, it's super-dope to be like, 'Yo, we represent the newest, coolest thing,' even though it's really the oldest thing."