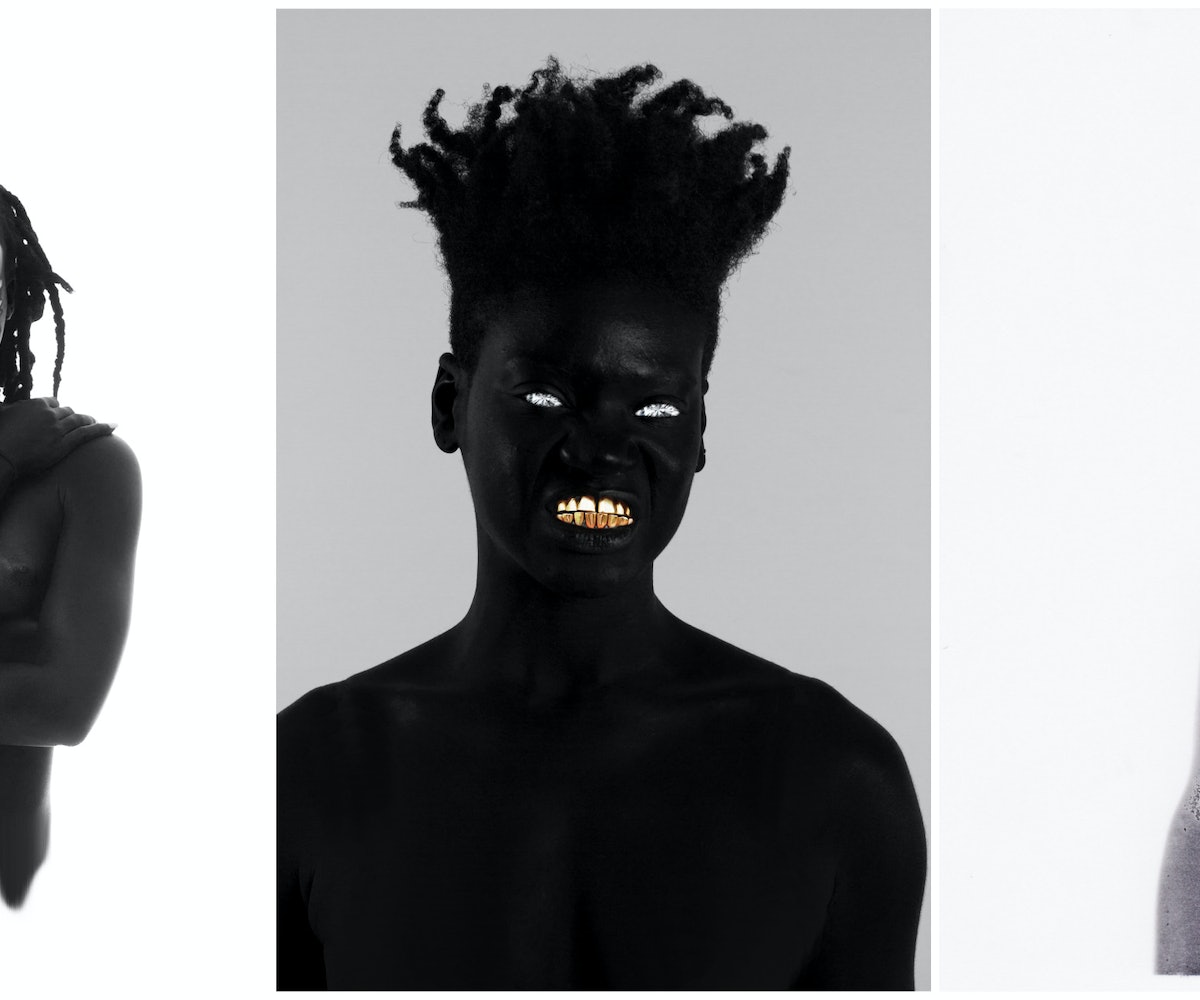 Art is reflective of the culture in which it's created, representing aspects of society and individuals in a variety of ways. An artist's depiction of their subject, no matter how abstract, gives us a deeper understanding of the world they live in. So it's only natural that art should be used as a vehicle to change a narrative or to rewrite dominant ideology. And this is exactly what self-proclaimed post-disciplinary artist Damon Davis set out to do with his most recent exhibition, "Darker Gods and the Garden of the Low Hanging Heavens".

Davis creates work that's reactionary, but he tells me that it's a good kind of reactionary—as opposed to the callout culture we're so used to seeing on the internet, or the kind of reactionary that's based in lies and hatred (like that of our current president). As a reaction to the negativity and fear around him, and with a lifetime of understanding of how it felt and what it meant to be stereotyped as a black man, Davis set to flip the script on the "tropes and myths that have been told about us, as well as myths that we tell about ourselves."

This resulted in "Darker Gods,"a reclaiming of the negative portrayals of blackness that still dominate our societal understanding (for some reason). He created a surrealist collection of gods, who shed new meaning on stereotypes usually used to demonize black people. "What I'm just trying to do is to encapsulate these different cultural ideas into deity forms," he said, "and to give people of color something that uplifts these traits that are usually used to demonize us."

The particular work attempts to take back and refocus stories told about him and the people he knows. Davis grew up in the South and notes that there are people in his life that align with these negative stereotypes, including himself. He's watched himself and others be judged based on the stories that society tells us about them, which, he pointed out, are formulated by people who "don't know anything about our reality." "It's always some voyeuristic portrayal of us that people tell," he said. "It's like looking at us in a zoo. "He continued to argue that these stories are created "so that the people who are responsible for the circumstances that we grew up in can sleep well at night, and so that their kids can feel good about where they came from.

"Darker Gods,"which is currently on display at Miami's Art Basel, has a co-sign from the Black Lives Matter movement, which was itself borne from the work of artists. When I spoke to Patrisse Cullors, an artist and one of the movement's co-founders, she told me that art and artists are central to any social movement. Further, she said, "Black radical artists have always been at the center of [them], especially black social movements." The art that is created by artists focused on activism works to shift a dominant and harmful narrative, which is precisely what Davis' work seeks to do. "Damon Davis is at the intersection of both arts and culture, and activism," Cullors-Brignac said.

Cullors also said that "Darker Gods" is made even more powerful by refusing to play into the callout culture that we see so much: "It's such an important work because it's not a reaction to police killings or black death, it's actually recreating a new development for how we imagine black life." This work isn't new, and neither are the prejudices and stereotypes Davis is rewriting. He started working on the project when the Ferguson protests were happening, a time that plainly demonstrated how little we had progressed as a country and a society when it came to adequately respecting the lives of black Americans. Just the combative, defensive reaction that white people took against the phrase "black lives matter" should clue you into the defensiveness inherent to white supremacy.

And things have only gotten worse under Trump. The FBI reported earlier this year that the number of hate crimes rose for the third consecutive year in 2017, which we have little trouble connecting with the rise of Trump's hateful rhetoric toward anyone who doesn't look like him. This year alone, 898 people have been killed by police force in our country, and 22 trans people (mostly women of color) have been killed. Even though the rhetoric of this administration is overtly racist, ableist, and homophobic (and the list goes on), the prejudice and discrimination have obviously been going on for much longer than that—it's just not been as obvious to people who weren't paying attention.

And Davis plans to meet fire with fire. "I want to be as blatant as the administration," he said, referencing his fight for representation and a place at the table. "Anyone who lives in America knows the stereotypes that we have about black people," he pointed out. The works being showcased at Art Basel this week refocus the stereotypes of "the abusive, absentee father; the mother with a bunch of kids with no education, the trappers; the people who are cool on TV, but who you don't want to be around for real." And by reimagining these harmful stereotypes, reclaiming them so as to change the narrative, Davis is hoping to change the way these stories are told across society.

He also stresses how important it is that the narrative is changed by a black person; he said, "I think it's just time for us to get a chance to tell our own stories. It's cathartic, and it's also something that can help us communicate with each other. What I'm trying to do is have a dialogue with all people of color." Davis brought up the fact that we all learn Greek mythology, but we never learn about the folklore disseminated by people of color. And that creates a cultural and power imbalance, and influences the way that people think about each other by "putting ideas into people's minds about who they are."

And, just like Hollywood, which still has huge diversity problems, the art world also has a long history of systemic racism. "The art world, unfortunately, in so many ways was established and commodified by white, European artists and white, European philosophers," said Cullors. And not only that but, Cullors noted, the art of people of color has been historically stolen by white people. "We know the terrible, terrible history of white colonizers pillaging African villages of their art and artifacts, and then stealing them and taking them to museums," she pointed out. "The art world has never been friendly to black people, and it's never been friendly to our culture."

Davis' work is in direct opposition to the silence and appropriation of black voices, and the harmful misrepresentation and stereotyping that comes as a result of it. And a large part of his mission is to force white people to better understand black voices. Most importantly, though, his work is for people of color. He wants everyone to be able to see themselves in art, and to see themselves authentically. Only once we allow people of every background to tell their own stories will we be able to have that representation for everyone.

"Darker Gods and the Garden of the Low Hanging Heavens" is on view through December 9 at 6300 NW 2nd Ave in Miami.